We created a toolchain which creates with one command a Mac release of our game. It was quite interesting as the search path in the dynamic libraries are statical encoded when you compile your application on a mac. They have to be changed afterwards. We hope that everything is working now and that the game will run on other Macs. Feedback is always welcome!

You should have at least iOS 10.9. It could work on older version but we are not sure as we did not tested it.

The next step is to set up Steamworks so that the game can be uploaded to Steam.

We also started with the creation of a Linux tool chain. We plan to support Ubuntu 14.04 LTS.

Yes this is the toolchain posting :-). We also nearly finished a model toolchain which will automatically integrate our models from Blender in our game!

As we want to implement HDR in our game we thought that it would be the best if we create a shader generator. This little piece of software will allow us to embed the GPU code better and faster in our game. As a test we are currently implementing the Gauss filter which is used to generate the glare. With this filter other effects like depth of field would also be possible.

The generator will allow us to program the GPU in a similar way as we do it with the CPU. Perhaps this does not sound very cool if you are not a programmer but it is in fact very cool!

We created the concept for our HDR pipeline. It will support glare, depth of field, a simple form of motion blur when you move fast, light adaption, blur and night tonemapping.

In the next unstable release we will enable the ability to create glass. The renderer is working now with the exception that it is not compatible with the particle effects. This means you will not see a burning fire if you look through glass. But if you don't everything will be ok.

And we thought it would be fun to add colored glass, so we did it. Here is a screenshot of the germany flag made out of glass: 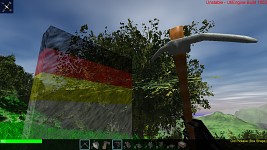 As mentioned last time we want the user to be able to change the screen resolution in-game. This works now as the engine is able to reset itself without a restart. And when you change the screen resolution a nice window will appear which will allow you to reset the resolution if you do not like it or if it isn't supported. We had to disable fullscreen support for the Linux and Mac version as we had problems with SDL. Under Linux the mouse does not work and under iOS the screen changed to black. And then we had to reset our Mac. These are not bugs in our game these are bugs in SDL.

And we started with a long term project. We want to create a new data structure which stores the voxels of our game. Our goal is to add support for multiplayer, dynamic water and a much faster world loading system. But this will take 6 – 12 months.

And we tried to hire a freelancer to create some models. Unfortunately he did not told us the price and he started to model before we ordered models. And now he thinks that we will pay him money.

I am waiting for the Mac version! Load it up soon!