Part 2 of 3 in a series detailing the game. [Explore Gameplay : Discovering the Galaxy] "In a typical 4x Game, the early part of the game is spent uncovering the map to find the resources you will then exploit to advance. In Small Galaxy, there is already a significant amount of resources available to exploit."

This is the part 2 of my 3 part exploration of Small Galaxies distinctive gameplay personality and features. If you missed part 1, where I begin to uncover the resource gathering of Small Galaxy, you can find it here.

Continuing on the theme of the 4x style of game, this time I wish to uncover the 'explore' element of 4x games, and how I have applied it to Small Galaxy.

In a typical 4x Game, the early part of the game is spent uncovering the map to find resources, discover your opponents, and plan your expansion. In Small Galaxy, there is already a significant amount of resources available to exploit and no opponents to contend with, so the explore side of the game has to be more than simply gaining access to more of the world, or in this case, galaxy.

So in Small Galaxy, you explore the galaxy in three ways: [Search], [Scan], and [Survey]

1. Search
At the outset of Small Galaxy, you have a limited visible range, reaching out from your station at the center of the map. Sending out Probes or upgrading your stations scanning range allows you to expand your field of view, giving you greater access to the galaxy around you. This is very similar to the exploration element found in other 4x games.

2. Scan
Spread about the galaxy are strange and/or unusual things. These [Anomalies] often hold within them a special reward for the player who spends the time to search them out and scan them. Scanning them can unlock new technology, grant you a stash of resource, boost your TEK regeneration rate, or some other benefit. So it is to your advantage to find them and send a probe to scan them.

3. Survey
Each planet holds within it a hidden amount of untapped resources that are just waiting to be discovered. Like Scanning Anomalies, Surveying a planet has the potential of rewarding you with a number of different bonuses. Unlike Scanning Anomalies however, Surveying a planet also allows you to construct new structures in their orbit. So spending the TEK to have a planet Surveyed is very important.

Another aspect to Explore, thought not related to the 4x series of games quality, is the different cards used in the game to represent almost everything in the galaxy. As you explore the galaxy, scan anomalies, and survey planets, your collection of these cards grows.

Potentially (It might not make it into the initial release of the game) you will be able to use these cards to set the parameters that generate the random galaxy, set up different scenarios to challenge yourself, and many other ideas I have that are creeping their way into the projects schedule (inflating the time it is taking me to make this game to unreasonable levels).

I am working hard to get these features into the game as quickly as my fingers can code, my hands can draw, and my creative juices can be squeezed out of me... but it is looking more and more like I am going to have to hold some of the more fantastic ideas back from my first release and save them for the PC version (as well as a patch to be released for the Xbox version at the same time).

I have applied a few stylistic changes to the game since my first playtest release, moving the menus around a little bit, and making the cursor details elements transparent. I haven't had a lot of feedback yet, but seeing as the release is very early, I am not all that surprised. 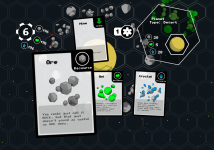 Also, I am still looking (or listening) for the right music to put into the game. If you have any suggestions (they have to be either free-use, or with permission from the artist) please send them my way.

I had high aspirations for the music in this game, but because of the limited time I have left to get this game out (because in all honesty, I am running out of money), I am having to settle for simple looped tracks... I am really wanting a chip tunes version of the music in mass effect, but I am not holding out hope.

Thanks for your support.
-fidgetwidget.

Sounds neato, keep it up!

Stylish stylistic changes!
Really nice, lucky you are that now my feedback you receive will... and I need to stop talking as a fat perv..

Really cool game and ideas you have man, i'm tracking for sure!