Courier of the Crypts is going forward with the development. Check out the latest updates which ranges from engine changes to map development.

Because of the Indiegogo and Greenlight campaigns I got lots of downloads of my free early demo preview. I also got very nice feedback and bug reports which I was fixing few weeks now. Let me make a quick recap of updates, changes etc. 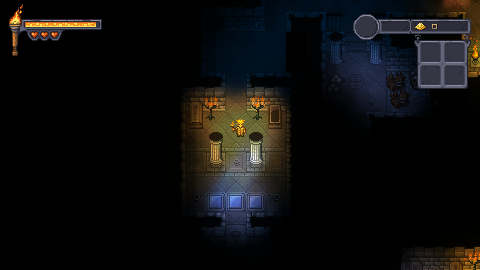 This is part from the new map that I'm working on

Since the Indiegogo campaign failed I was thinking about many options how to fund my development and I've decided to go with Alpha-funding. I'll be selling the game with the early-access tag while I'm still developing it. It will be few bucks cheaper and you'll get regular updates until the game is done. Of course, once it's done you'll have the full access to the game :)

I'll let you know when and how will this happen but it will be really soon.

Looks like a good game. It's a shame to hear about the indiegogo campaing. Keep working hard. I hope you can finish the game. I will be following you.

I'm a little curious about the lighting effect. It's based on shaders? Do you have any reference so i can learn about it?

Hope to hear news from this soon

Thanks for your word. Yeah, I was hoping for more but anyway, I need to keep pushing forward. I'll be going for the Alpha-Funding program - selling early-access version with few maps and keep the development on.

About the lighting, there are no shaders involved, just a rendering with blending functions.

I blend lights with black texture which I blend with the whole scene at the end. I'll be making a tutorial about it soon because I get this question many times.

Hey i would love to see those tutorials. Tell me when you publish them. Also if it's posible i would like to know what language and engine are you using to build it. Hope to hear good news from this game soon.

I will let you know for sure.

I'm using my own engine which I'm developing while working on the game. Engine is based on SDL and OpenGL :)

Indiegogo is definitely 50/50 when it comes to campaigns, if you pull through it will be worth the effort, I can see that just by taking a quick look at this.