A new unstable release has been uploaded. Check out the new wooden framework set, the updates of the HDR pipeline, the new music and the bug fixes!

A new release has been uploaded to the unstable release. Here are the changes:

The problem with the black shadows is resolved. But I am still not satisfied with the colors. I miss a little bit the summer feeling. We will improve this in further version.

We added a new wooden framework set. So you can create wooden towers, stairs or even wooden platforms. Here is an example of a perch: 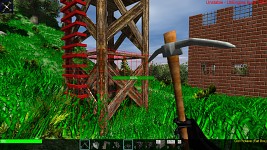 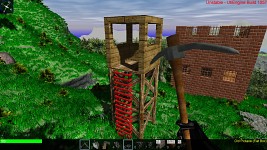 As we tested the wooden framework we had problems when placing the objects on top of each other. The problem was that when the object is not placeable the engine will display nothing which makes it difficult to current the placement position. This has now been resolved. When it is not possible to place an object the game will nevertheless disable a box: 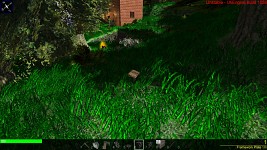 Ok it's barely visible but this is intention. There should be a clear difference to the case when you can place the object: 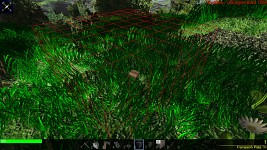 The last bug in the transparence renderer has been found: 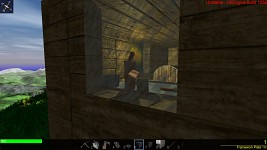 A youtuber had the idea that it would improve the atmosphere of the game when we add music. This has been done now. We are using free music from cdk downloaded from ccmixer.

The music can of course be disabled in the configuration menu.

As youtubers often say that there isn't much to do in this game we added a feature overview when you start the game. The feature list is not complete yet. Here is a screenshot: 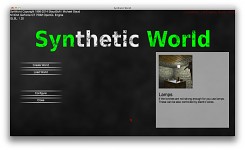 We did a lot of bug fixing. The most annoying bug was in the shadow map generation system. When the player moved it could be that the shadow map was generated with the wrong sun position. This produced flickering. Then we removed the rest of the old game engine. As you may have noticed that it says copyright 1996- . This means that there was also an old quake style engine in this game. We removed parts of this old engine.

One youtuber complained that he found it boring when it is dark at night. Ok, since the first commercial release of our game we have the „Bed“ in which you can sleep. To make it easier for newbies we added several entities when the game starts. Amoung these are a bed, torches and a chest.

For the new world matrix we created compressed data structures. But it is still a long way!

And as we want to bring the bear in the game we again worked on the model importer. We imported a sheep, the fish and a dangerous insect!

So that's it for today. I hope you enjoy the new version!

downloaded this about an hour ago, so far its impressive, some trouble getting the 3d cube to come up when mining blocks, makings it hard to place or mine whole blocks

The demo on Steam is much more up to date. Did you downloaded it there?

Here is the link to the Steam site:

Did you cycle throught the different block types with the right mouse button. And you can also equip a shape in the inventory. Then you can construct different cubes or ramps!