Economic Crisis 2013 requires a substantial help in processing and systemizing information about politicians, governments, political situation of various countries from first of November, 2013 and until present days. You can present us with information about your country and get a nice fat feedback with results in next versions of mod.

To all countrymen, friends, comrades and subscribers!

Our mod – Economic Crisis 2013 – requires a substantial help in processing and systemizing information about politicians, governments, political situation of various countries from first of November, 2013 and until present days. This hard labour needs tons of work with information sources written on different languages – and we simply can’t keep up with necessary pace of translations and stuff.

This is how you can present us with information about countries and get a nice fat feedback with results in next versions of mod:

Political system of the mod resembles the one from Hearts of Iron III. There are 7 main ideologies in the mod

Each ideology must have a number of ministers, advisors and heads of state/government. You may include heads of military forces there if you like (generals and field marshals) who become available only under the rule of certain ideology.

Structure of the Government:

+ and three more political advisors / counselors (as in original game). 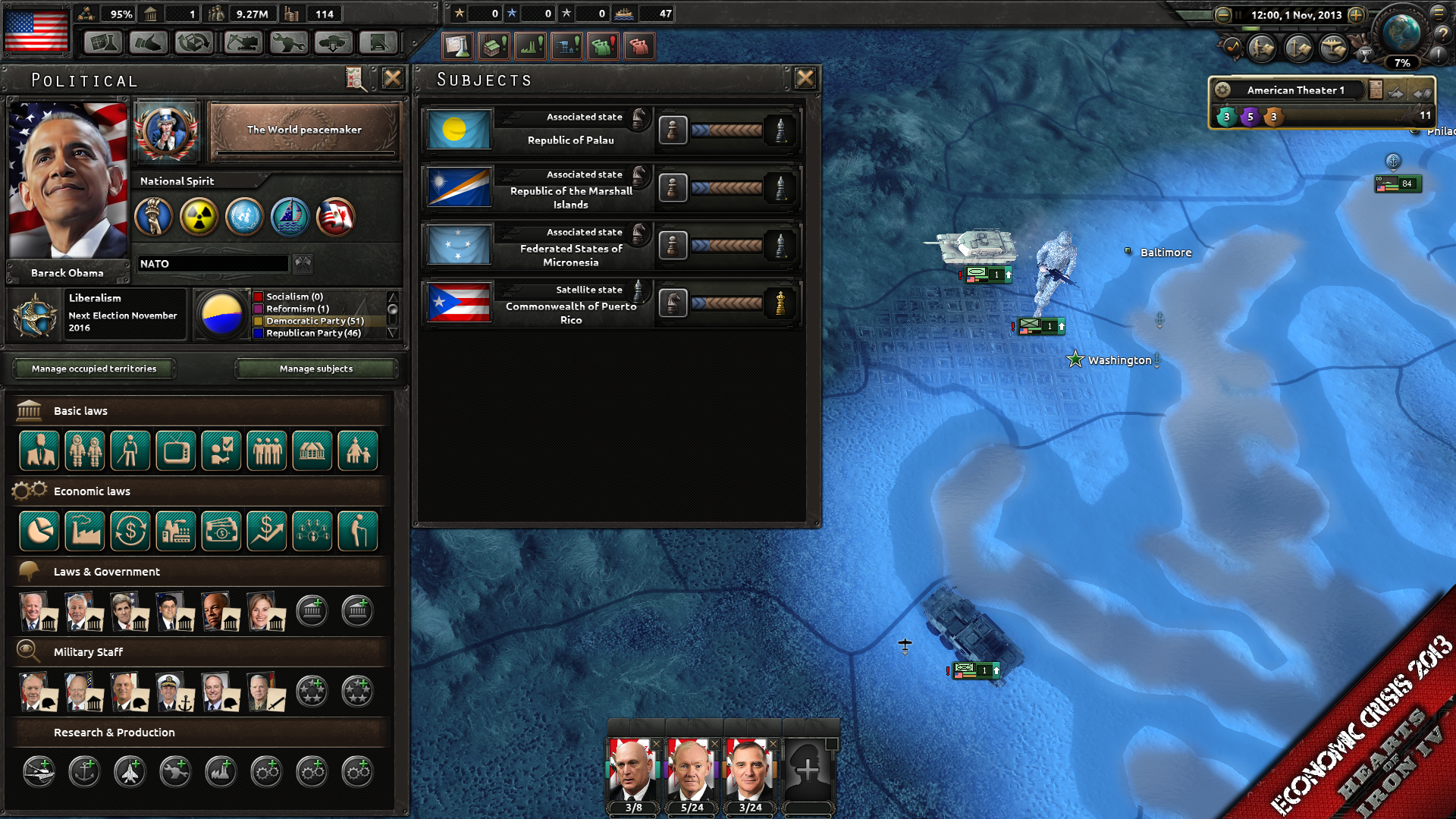 Ministers represent their own ideology – there are a few exclusions, but they are rare – and sometimes can be in opposition to another ideology or ideologies simultaneously as well. They become available only while their ideology is in power or special coalition of ideologies was created through event. Bear in mind that radical minister (the one who oppose another ideology/ideologies) won’t be available in case of a coalition rule – he’ll be in roster only while one ideology - his - rules.

Example: If nationalists gain major part of seats, there is a possibility of coalition with conservatives (“soft nationalism”) with focus on restoration of monarchy. Those in conservatives' ranks who oppose nationalism won’t be in pool for choosing.

There may be another condition to fulfill – some of the ministers or advisors are available only after certain law in the form of government, religion or corruption negation has been passed.

Example 1: Igor Strelkov-Girkin, popular wannabe-theorist (and a practicer – to a certain extent, lol) of “ideas” is allowed to be recruited as minister under conservative and nationalistic rule, but only if you chose your government form to be monarchy.

Example 2: Influential and popular imam Abu can be the minister of Foreign Affairs, but only if you chose religion-regarding law to be set on “State Islam”.

Example 3: You get it. John Doe represent radical communism, but cannot be chosen until your government form is, well, something like Socialist Republic, due to the fact that he is a communist and the seat of his ministry cannot be obtained by his political installation in a liberal parliament.

Like in original HoI, most of the ministers can be advisors at the same time. They have different set of modifiers, abilities and roles - but you cannot give your minister more advisor's seats than one, because politics, maa-a-a-n. As you guessed, advisors have their own political agenda and thus could influence popularity of their party while being empowered. The better his main advisor ability – the bigger impact on popularity he gives. There is another way – sometimes nice main modifiers is compensated by none-ideology debuff.

Amount of available advisors in the roster depends on the popularity of their ideology/party.

If it’s around 0, you’ll always have two or one of them – these lucky men are popular conformistic powerfigures with little buffs/modifiers, but drift tendencies nonetheless.

Then there are a few borderlines:

45 percent of popularity – going full-combo. A number of indeed influential advisors appears – they can even influence course of events, your economy, can force friendship/rivalry with certain countries If this ideology is on the rise and/or leads the country, or, in case of non-radical advisors, there are coalition created – all of this good people are at your disposal.

You must know that our vision dictates each ideology has up and down side – good or bad, to be less elaborate. This is how the things are now – still in discussion though:

Socialism-communism – following the ways of Marx or any other Stalin gives you a boost to specialized industry, allows you to nationalize and mobilize means of production, sets taxes on low (or high), makes social support moderately subsidized and militarizes the nation.

Why would we ever see things like that? Because we can… Afford this for the sake of realism and balance. In perspective we may add this mechanic regarding opposing ideologies:

Now let us speak about army staff. There are these ranks available:

We need you help on every country in every matter stated except Russia and Ukraine.

If you are so engaged to see the mod completed as soon as possible, we humbly ask you to form your chunk of information - suggestion, review, call it whatever you like - about a country like this (HERE COME THE EXAMPLES):

Comrade Comradov – conservator, potential prime minister since 2016 because he became a leader of his party, before is a potential advisor as notable businessman (have this assets here, in %_Applestan/Countryname_% and that big financial account – in %_Countryname_%)

Additional advisors of the country

Military Staff in Command of %Countryname%:

Douché du Meloné – General of the Land Military Forces (if not a minister), available if ideology is not a nationalism and no coalition with nationalists is presented. [Photo: link to an image. You can give us a link to a funny youtube video with silly cats in hats once in a while, as we all need a break, but don’t, please.]

We understand that there may be problems with photos or elaborate descriptions. In general, try to describe your protégé as precise as you can and provide us as much intel… ahem, info on him as you can – that way you’ll give your chances to see that man in your redaction in game a nice rise. The most difficult and most precious right now is info about alternative ministers for different ideologies, which are not really popular in real life for that country (Like Islamic Party for Japan, that sort of un-popularity). We have to contact our old Boris Rubbaka from former KGB to get this info, but he got old and it's unreal to hear his mumblings =), so your help is much appreciated. And we also seek information about different ministers for one seat within same ideology.

In general and in conclusion – do not hesitate to write us a letter or two of constructive thoughts of yours. Good ideas never did any harm (or so they say), and bad can be reshaped into modest and acceptable just as well.

There goes our contacts. Write there to submit your research:

Hey, when is the mod?

Mikovariy! When is this wonderful looking mod going to be released?
Also, I'd like to know how to change the acting President's picture.