Learn a bit more about The Stargate Mod as we uncover some features and answer a few questions.

this update is rather text heavy but it announces some more details about the games features and gives some information on the reasoning behind some of our design choices.

We made it our personal goal for this mod to bring across the fun and excitement you may get from watching the Stargate SG-1 series but there are quite a few things to consider and sometimes it's a delicate balancing act to have sound and fun gameplay and at the same time stay true to what you are given in order to immerse the player in the experience. Expectations are to be met and it's not always easy when your source material (the TV show) not just throws unanswered questions at you but also inconsistencies.

But let's first talk about one thing that really helps to draw you in, the story. What would a good TV show be without its characters and story. In our multiplayer version of the game we can't put focus on character development so our multiplayer maps try to deliver a deep background story tied into gameplay to enhance that Stargate feeling. Be it stealing valuable artifacts from the enemy, 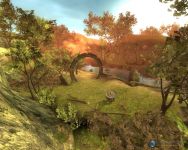 collecting more power sources than the enemy to destroy them with a massive weapon or simply dominating the galaxy by means of territory control - one planet at a time.

Well actually let me correct that, multiple planets at a time. A lot of the multiplayer battles will, subsequently or simultaneously depending on the story and objectives, take place at multiple locations often light years apart.

As casually mentioned before in the multi-sky announcement and as can be seen in our most recent DHD video demonstration (check it out if you haven't yet) one of our mods key features is what we internally refer to as multi-planet mode. 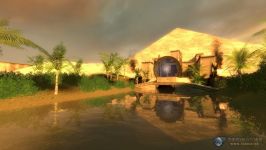 Crunching a number of independent worlds into one single multiplayer map for the players to explore or conquer, because that is what the Stargate is all about, which in turn is the central object around which this mod revolves. So we would like to enable players to freely roam around multiple locations without having to wait for another map file to load in between. Otherwise the Stargate wouldn't be much of a gameplay mechanic.

Talking about the Stargate, that brings us to a few of the aforementioned inconsistencies.
A quick lesson in Stargate science-fiction for those of you who don't know and a recap for those who do: Stargates are ancient devices which can establish wormhole connections between each-other, allowing for one-way matter and two-way energy travel. Although there is more to it (for example visible light does apparently not travel through the wormhole) that is basically the gist of it.

Now in order to establish a connection one needs a power source (more the greater the distance) and the remote Stargate's address which consists of 6 symbols which represent star constellations (i.e. six points in space) which when connected intersect near the Stargate's location. A Stargate has a rotatable inner ring with 38 of these symbols on it plus one additional unique to each gate acting as identification of the point-of-origin in a dialing sequence. This ring can be thought of as a rotary dial on one of those old telephones. You basically dial the symbols to the top one after each other and once your 6th 'digit' has been entered you turn it to the special glyph representing your point-of-origin and the gate will attempt to dial out and succeed if the address was correct and the remote gate isn't currently busy.

We sometimes get asked for example why in our videos we only enter six instead of seven glyphs on our DHD. First of all this additional device - referred to in the show as dial-home-device or DHD for short - can be found next to most every Stargate, it is kind of an add-on, upgrading the analog to digital. Instead of having to manually turn the inner ring you can directly enter the address by hitting buttons on the linked DHD. So again the telephone analogy. A DHD has those 38 buttons with the glyphs for the gates' addresses we talked about plus one larger red button in the middle which obviously represents the point-of-origin glyph end-marker.
At this point the show with it's different directors and writers is often times inconsistent so here is a list of implementations that you might be uncertain about including the 6 vs. 7 controversy:

I'd like to just go into why we went with the six symbols + red button approach a bit further as that has been asked the most. There are three main reasons:

Alright you made it through this hopefully quite informative update and we hope that some of your questions have been answered.
One more thing: Our last animation artist just got hired by Digital Extremes (congratulations) so we are again looking for some reinforcements in that area. If you are interested please apply here.

Now treat yourself to this preview screenshot of a new, yet unnamed location. Another fallen city. ;) 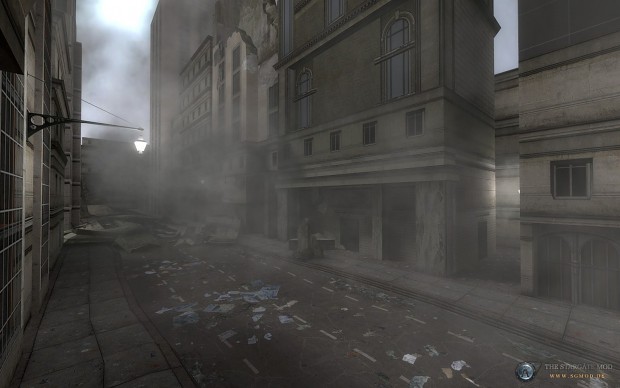 I really like this text, and for me, as a stargate fan, it is ok that you only use six chevrons ;)
The Stargate Mod is my MotY2010 =)

You raise some good points - I never really thought about the inconsistencies within the show except for the unique glyph. I never even thought about the "Incoming traveller" conundrum - you're right, that makes no sense at all.

The lack of rotation on Stargates bothers me, but not so much you guys since you're just basing it off the show. I know SG-1 didn't exactly have an unlimited budget and couldn't move the rotatable prop to every British Columbia park they filmed it, but the rotating Stargate is one of the coolest visual effects in the show. Not mention that it doesn't really make sense for the Ancients to have constructed a rotating Stargate that didn't rotate (unless you explain it away with a firmware update or something).
/rant

Anyway, this mod seems to be coming along great. You guys seem to know your stuff, and I'm glad you're not sacrificing gameplay for canon. Voted.