Dain and the Iron Hills

Dain II Ironfoot, the elderly king of Erebor, is the Dwarf faction's strongest hero. With great armour and an large amount of health, he is a defensive powerhouse whose only weakness is a lack of strong offensive abilities. Dain makes up for this by having great support powers for your troops. In addition to defensive leadership, he starts with the Red Axe power, which temporarily bolsters speed and attack of units nearby. This also affects Dain himself, making it a great ability to use to charge into combat. 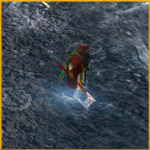 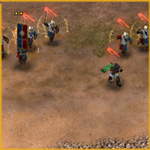 Dain Ironfoot holds a ford in the Iron Hills

At later levels, Dain can use Long March to increase the speed of the target units for a duration. He also gains the passive Lord of the Iron Hills ability, which allows him to oversee Mines and Forges when nearby, slightly increasing their resource generation rate. At Level 10, Dain gains Last Defence: a passive ability that makes him almost unkillable. When the hero is low on health and is attack, he has has a chance to go into a berserk fury, causing enemies to flee and boosting his attack, speed and armour for a short time. I recommend engaging a leveled Dain at range, as his terrifying fury makes melee combat a frightening prospect. 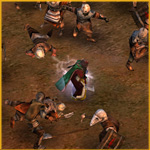 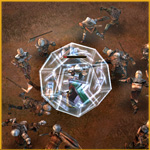 Orcs flee in terror from the Dwarf who would not fall

Dain hails from the Iron Hills, a wealthy bastion of the Dwarves. In the Rhovanion Alliance Mod, this realm was relegated to a minifaction - the The Dwarf holds it provides heavy late-game infantry and artillery support to bolster the offensive capabilities of the Dwarves of Erebor. 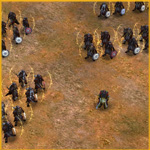 Dain leads a force freshly mustered from the Iron Hills

You access the Iron Hills via a second-tier spellbook power. Purchasing the power allows the construction of Iron Hills units at the Barracks, Guardhouse and Workshop. 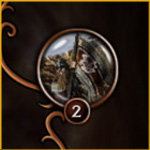 The Barracks will now produce the Baruk-Sharahul, tough Warriors from the Iron Hills. These troops are well armoured, and wield swords and shields. They can toggle to instead use a heavy two-handed mattock for additional damage to buildings and siege equipment, but they lose defence and attack speed. 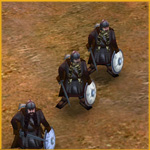 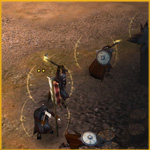 These tough Warriors can wield sword and shield or heavy mattocks

The Guardhouse gains access to the Azaghar-sharahul, agressive, lightly armoured Dwarves who excel at raiding. They have a higher base speed than most Dwarves, and so are ideal for chasing down archers. They can also enter a heroic, reckless state, gaining a very large bonus to attack and even more speed, but throwing caution to the wind for a 50% reduction in armour. These Dwarves pair excellently with the tough, slow Khazad Uzbadul. 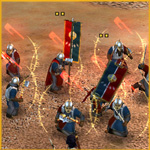 Dain charges, accompanied by a strong force of Azaghar-sharahul


The final Iron Hills unit is built from the Workshop - the Sulun-abanul. This Mangonel provides excellent ranged siege support for the Dwarves. It can switch between large boulders for use against buildings and spreads of shrapnel whose large area of effect makes them ideal for targeting infantry. It should be noted that the Muster of the Iron Hills also allows you to build Mangonels as a defensive expansion at the Castle. 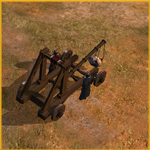 These Mangonels excel at precison work or wholesale devastation


As a note of interest, all these screenshots were taken on _Haldir_'s excellent Iron Hills map - but that's all for this week.

Another nice update. Keep it up!