Want to see what the team is working on at the moment? Here's a sneak peak!

Hello all Dead of Night fans! It's time for a media release! We'd like to start off with introducing the newest addition to our team! Our new concept artist is Lingmerth (See his profile here: Moddb.com ) Please welcome him, he's done some already great work! He has taken the most basic of ideas and turned them into some true artwork! That being said, let the media update release begin:

"Dead of Night Logo" by Katasdf

Here's our new and official logo, done by myself (Katasdf). 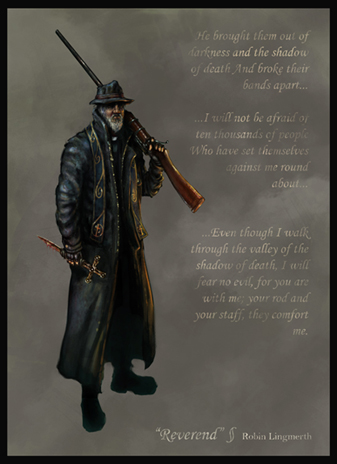 This is the first of our slayer concepts. Completed by our concept artist Lingmerth, the model follows the same grungy feel we had originally imagined. We're really glad to have this piece, and are now just looking to have it modeled to be placed in game.

"Dead of Night Theme" by Rottenbeard

This is our dead of night theme. Most likely to be used in both game menu, and possibly loading screens.


We're soon to have more media ready for release. Also, the site is in progress and we're really excited to get it up and running! In addition, we're currently working on a few DEV videos to show off the code we already have done, hopefully to spark some interest in the community.

Until next time!
- Dead of Night Team

very nice concept for the Reverand

The theme music sounds good, and the slayer concept looks ok. Overall this game looks very interesting, so keep up the work.

I'm glad someone finaly decided to make a vampyre slayer mod for source =)
Thanks guys!

This is gonna be SO AWESOME!!!

Nice concept art and soundtrack but I'm not very keen on modified HL2 logos for mods. I reckon you could come up with something better :).

Is this endorsed or in any way supported by the creators of Vampire Slayers? No saying anything about "Rip-off omgz, nubs" or anything, I'm just curious.

No, we have no relation with the original Vampire Slayer mod. We've been in contact with Routetwo (the original VS creator) and he's stated he'd like that we stay away from things like map recreations, or direct copies in that sense.

We're in no way looking to recreate Vampire Slayer on the source engine, but to take the idea of both Vampires and Slayers in our own direction completely.