The finished release of Dead Before Dawn is a month old now and we have some more news regarding our ported version to Left 4 Dead 2 which we will release on november 24th! 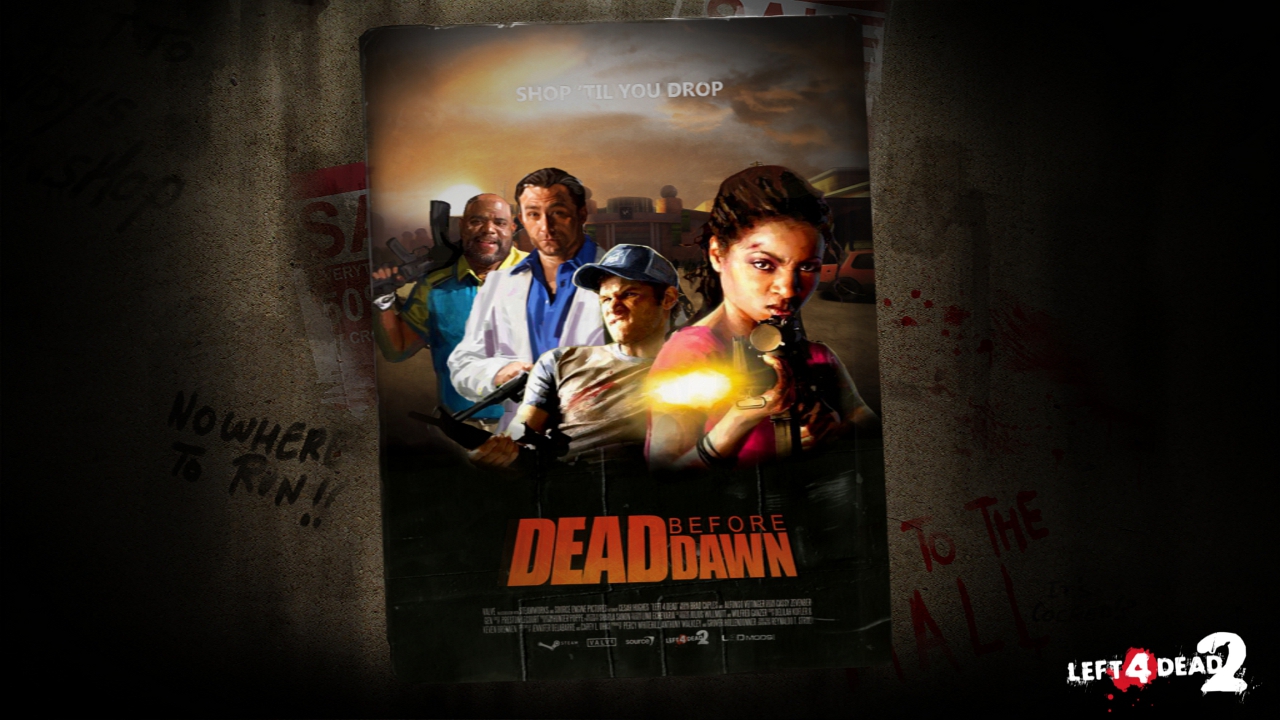 Hello folks, it's already a month ago that Dead Before Dawn was officially released as “fully finished”. After almost 2 years of l4d development, it was finally mature enough for a release. Unlike the beta release of last year, we heard nothing but positive commends and reviews this time around. PCGamer called us the n1 mod to get back to l4d1 for, we're having a 95% review score on l4dmaps and positive user reviews posted almost every day, and several gaming magazines give us the light of day as well. If you want to read the pcg recommendation, click here.

Ofcourse we also want to look in our own belly and lucky enogh the L4DMods crew has members outside our DBD development team and these enthousiasts can and have issued their own perspective on the mod which you can read here! 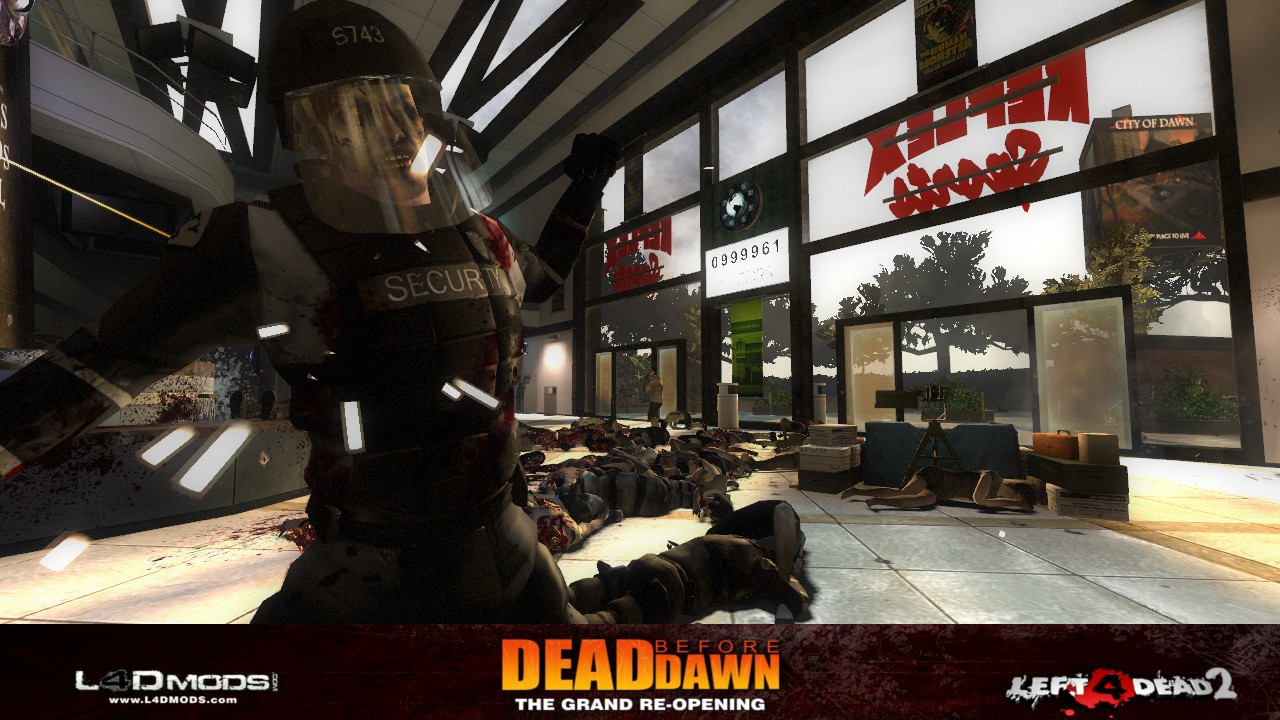 Around 100,000 downloads later, we can tell you that the version for left 4 dead 2 is almost arriving as well. At the end of september: we started doing conversion work of the maps, and the entire month of october was been a porting month for us, Left 4 dead 2 is its own game and ofcourse a large amount of gameplay and map stuff needed to be retweaked.and sometimes rebuilt. 95% of the map's entdata (which means the set of control groups that govern many actions and behavior in the campaign) and the brushwork remained intact. But we opted to increase the details and props, just because the l4d2 engine allows it and it helps making the world of DBD more immersive as well...

We will release Dead Before Dawn Too on november 24th and untill then, We leave you with some media (screenshots and music). 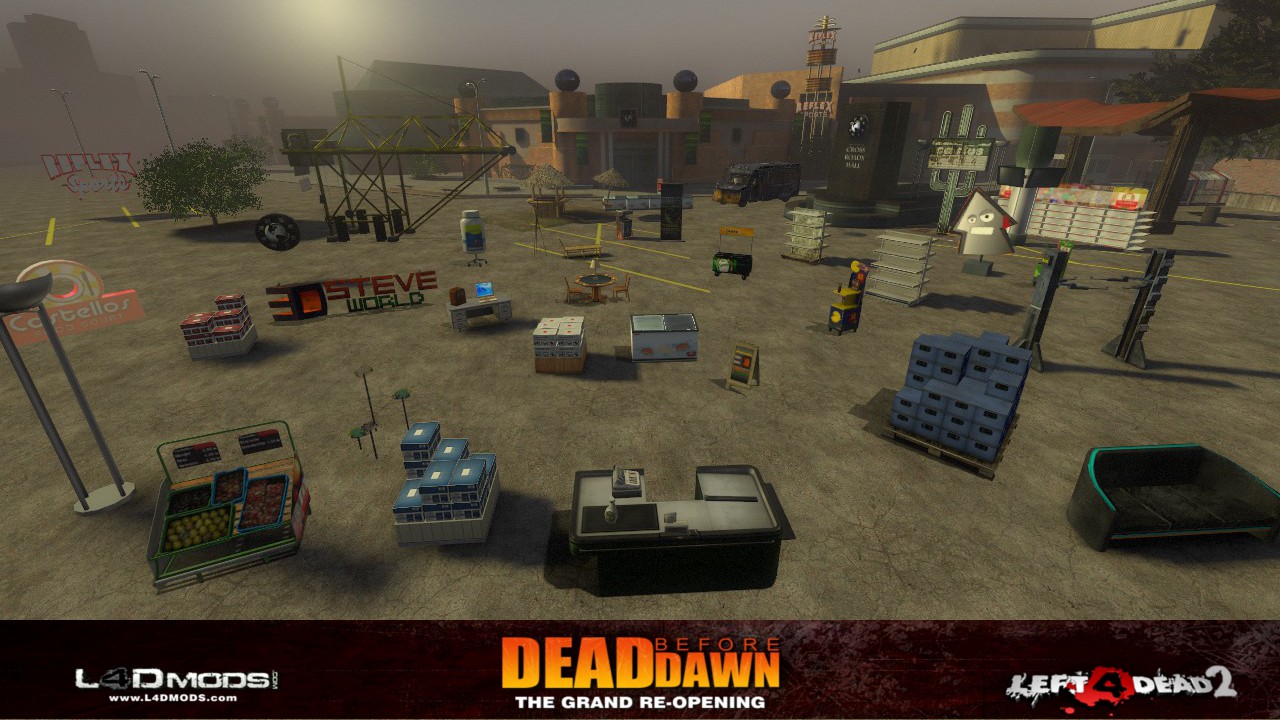 To close this off, We would like to show a little gallery picture for you. This image shows our custom props nicely aligned in front of the Crossroads Mall. More than 4 times more custom textures and materials are inside this campaign but it would be a little messy to show them all. Better is to play the campaign when it comes out and enjoy all the details and hopefully also the new gameplay elements that are introduced becuase of the l4d2 version. 11 more days to go untill we release this version of Dead Before Dawn. We can't wait untill that time and find out what you think!

What the Doctor said!

What the Captain said !

What the Rebel said!

What the Ninja said!

What the guy who got laid said?

What the Troll said :D

The the No avatar said!

AND THEN GOD SAID "LET THERE BE LIGHT!"

What the believer said!

what the dude said at his computer

What the pedobear said!
wait what?

Also, did it help at all that Valve ported the L4D1 survivors into L4D2 for you?

I would never say that, there's some in our entourage of playtesters that say that because they like l4d1 so much, i like it too but in l4d2, the multitude of SI actually matters in the dicipline of "making it a bit more unpredictible"... especially in advanced/expert modes...

ah, about the l4d1 survivors... we end up not using them because half the immersion of using them is taken away becaus they have no clue about l4d2 weapons and their animations are quite weird in l4d2...

Well, looks like this is a no play if it's the new survivors, for me at least. Can't stand them at all.

The original 4 were THE perfect copy & paste grade B Zombie film characters...the new ones seem like they'd be the first to die, honestly.

well we can't do good for everyone... From when we tried it, I already was highly irritated that those survivors have no lines what soever for bile bomb, melee weapon and stuff. What makes it worse is that valve makes it "consistent" by muting their pipebomb and molotov lines as well and replacing them by generic mumbling.

Then darth found that they dont respond well to the new SI so well and have bad animations, so it's a bit of a dilemma. I love Zoey to bits but not in l4d2 :)

Just can't wait to play this on L4D2!

Awesome news! I will have something to test out with my new i5 :D

Now I just have to survive between now and next week :C