Celebration for our ancient city that was destroyed, where my grandparents lived, where one of my cousins lived, in memory of them, and in memory of all who died and survived, especially in Chernobyl memory.

04/26/1986
My grandparents, cousins, lived in Chernobyl after the Second World War, left Brazil and went to Chernobyl, and it died after the Great Nuclear Disaster History, today is their day, the day of the Russian people who lived there, and today day Chernobyl day, Stalkers.

Too bad the brothers Stalkers live far from each other, we could be here, drinking a vodka and eating a meat, in celebration of Chernobyl, our relatives, and the Russian Nation who lived in this city, and also to the Military, the doctors, firemen who gave their lives to put out the great fire of Chernobyl. 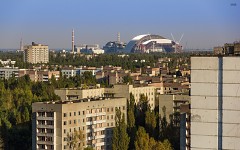