This news update entails our current tasks for the upcoming release, our goals following release, and our goals for the future. Consistent improvement is assured, and any issues that may arise from the release build we be addressed as soon as possible.

As of now, our team is in testing phase, and we're working to complete some of the work as follows:

The game hasn't been fully tested, so there are bound to be more conflicts we haven't encountered as of late. I can't give a definitive release date to do the goals that are constantly subject to change, and the quirky AI that presents various issues that have been encountered from the new overhauled AI structure.

Goals Following Release:
As you can plainly see from screenshots, more prevelant in some then others, the weather has been completely overhauled from the ground up, utilizing a dynamic weather system, shifting different weather cycles that consist of 24 hour transitions randomly throughout the day: 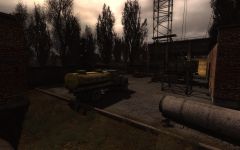 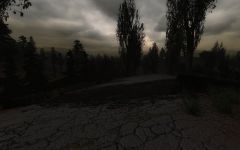 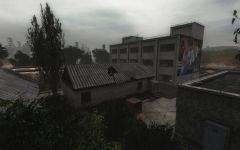 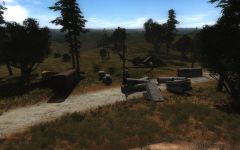 Each image as depicted here is representative of a completely different 24 hour weather cycle that is randomly transitioned throughout the day. While this feature is familiar to those with Weather Overhauled 3.0, you'll recognize that all of the weather variables have been completely overhauled in order to find a balance between aesthetic appeal, and realism. The skybox textures are from Panoramic mod, which has the most desirable look, and provides distant skybox landscape texture art to creates a simulated draw-distance enhancement, and increases the visual quality ten-fold.

I have no doubts that L.U.R.K. in its current state far surpasses any other Stalker Overhaul from an aesthetic standpoint, in an almost objective fashion, albeit impossible to view from such a standpoint. The screenshots do not lie, and I can assure you that every moment will be picturesque, or it won't exist in L.U.R.K. at all.

While this masks the monotony of one simple weather cycle from vanilla Stalker, and other weather mods that pride themselves on visual appeal such as the custom configuration from Stalker Complete 2009, it tends to create a fake form of diversity, which I plan to negate from memory.

One of the main focuses of L.U.R.K. from a gameplay standpoint is to create an extremely satisfying, depthy, lengthy, polished, and refined experience that people would refer to as an objective improvement. Preserving the core elements of Shadow of Chernobyl is important, however changes needed to be made in order to create a dynamic experience, such as the incorporation of enhanced A-Life, diverse encounters, diverse spawns, and a rewarding and challenging experience that rewards resourcefullness, intelligence, skill, all under a strong foundation of polish and features.

Of course a feature that L.U.R.K. prides itself on is the staple that has been strived for and failed countless times, which is stealth AI, which creates a completely new experience that validates the very title of the game. Much skepticism arose from my claims, however testers agree, that Stealth is here to stay, and it's better then ever, introducing new features unheard of in any other mod, such as dynamic light visibility:
Xfire.com
Xfire.com
Xfire.com

However as stated before, conflicts still arive from a feature that is subject to so many different visibility factors. The base release might be the released under the pretense of comprimise, but I nonetheless implore those of you who encounter such issues to report them to me, I would ask that you isolate them as L.U.R.K. specific before you do so.

Now lets get back to the original idea under the bold underlined text before I skew my writing on another tangent. One of the concepts behind L.U.R.K. is to enhance the dynamic and depthy aspect of Stalker, and how might I improve upon such an aspect? Well understanding the concept of dynamic light visibility would make it clear that different lighting circumstances effect the way the game is played, and these variables are subject to change based upon weather, which aside from the obvious aesthetic standpoint, how do we improve upon this?

Well the answer is simple, a completely overhauled weather system, that will use these concepts as the main push towards our philosophy for development. An unprecendented that will take the basic concepts of dynamic weather, and build upon the aesthetics, the diversity, and the gameplay beyond that of anything you've experienced.

The current weather build is unsurpassed visually, but the idea is to compile upon it exponentially by adding a vastly higher array of weather cycles, that would increase the current composite of 7 cycles, and expand upon it to something as high as 50. Of course you may be curious as to why that would be feasible given the current resources.

Vanilla weather, as well as all respected weather mods follow the concepts laid out by GSC. In general the weather transitions hourly, skyboxes shift almost constantly during the day, creating an ugly transition effect as mentioned before, and the weather changes far too consistantly in one day's time. This option was obviously spurred to create a dynamic experience, however my concept is as follows:

In other words, the most realistic, depthy, and appealing weather cycle that you'll ever see. However until then, you'll have the cycles as depicted within the images seen so far for the base release. The current goal is to make the strongest foundation around for Stalker, from then on we can decide to branch further from this base.

Future Goals:
Depending on how long it takes us to create the definitive base for Stalker, we plan to incorporate levels from the 1935 build, from Clear Sky, and from the upcoming Call of Pripyat game. However when this will be implemented is another thing entirely. We may decide to work on it ourselves if we finish our base quickly, however if it doesn't occur before Fall then we will adopt the work from AMK 2.0 and use that as a simplified base for work. Please don't confuse the base I'm referring to as the base for release, there will have an initial release upcoming soon.

Questions, Comments, Suggestions, and Recruitment:
As a friendly reminder, we're looking for any questions, comments, suggestions, and willing recruits, of course there are prerequesites for each. For questions I must ask that you inform yourself of L.U.R.K. to the best of your capabilities before you pose any inquiries, suggestions are only taken if you believe it will expand upon or improve the goals we've set to achieve, and recruitment requires skills beyond simple testing. We've got enough testers and I'm going to have to deny any of those who wish for a testing position who don't carry other traits that would be deemed usefull for our project.

Thank you for reading, and I hope I've given you more insight on the project and what it entails, at this point the distant horizon is still hazy, however we're making progress to reach our long-term goals.

Sorry for the double, but i didn't make it time to edit xD

Love what you've done with the AI and how stealth is an actual factor in the game now (from watching the videos). I haven't seen that done in any other of the main STALKER mods, hopefully this one, when released will get to me play STALKER multiple times again (adding to my 25 play throughs lol).

I...man I dont know how to say this but... I think I love you and your team, just came back from watching the videos, stealth man, STALKING IN STALKER!!! no other mod around there has achieved that and I dont know if they even tried, it makes me wonder, why your mod is in the shadows? I am about to get a new graphic card and I was just thinking about getting Oblivion Lost and some other graphic overhauling mod but you got it all and even better, you just got a full supporter over here =D

I see your list but as for AI detection theres a few really important things. You can be standing in a dark place looking out at a bunch of enemies in broad daylight looking right towards u. You can fire as much as you want enemies won't see you. Seriously they need to recognize muzzle flash and flashlight. Also another huge detection flaw is when you miss an enemy that hasn't noticed you. I think they'd notice they're being shot at especially when a bullet lands right next to them. This is all a huge portion of the immersion and I hope these will be fixed.