Has it really been that long? Yes it has. But that doesn't mean there is nothing to show off... There is some cool things to go on, new people involved, assets assets assets and more assets!

Heyo! In the recent months, there has been a new person involved with the project. They already helped out a lot even though their actual contribution to the mod will be seen or rather heard at later stages! There should be a video somewhere below showing off their work with some more details.

I took the extra time to work on the materials of the Ship, particularly the interior materials.
Using a PBR shader sure is handy but it can also come with it's drawbacks, especially considering how the level is done. Unlike normal Source where your level geometry is made using brushes this thing is pretty much 99% models. The only reason there is even a brush in the map is so lighting would compile lol
This can cause a bunch of issues, mainly with lighting and cubemap reflections. For example they can sort of shine through walls. Just the reflections can seemingly interfer with lighting.
Without further ado, here's some interior shots of the gateroom and gateroom corridor! 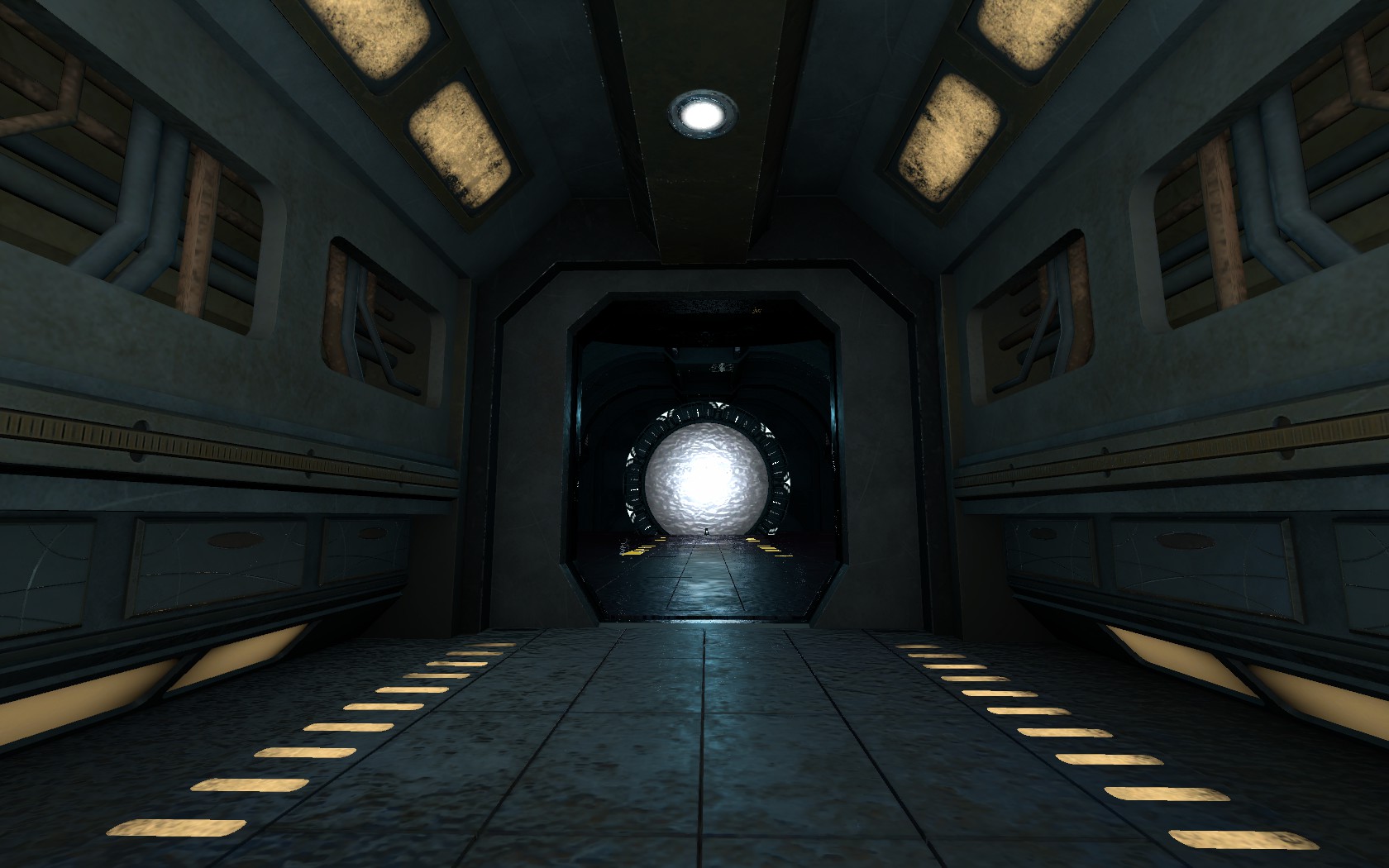 Showing off in these images is the SSR. Screen Space Reflections, they can be a very powerful effect.
Well there is also sort of an awkward moment, for some reason on my rig CSM (Cascade Shadow Mapping ) won't work at the same time as SSR. Which isn't too bad, most parts of the ship don't have a sightline to space so I can play around with it. This shouldn't really be an issue to other people, so far we haven't found any other person where this occurs. 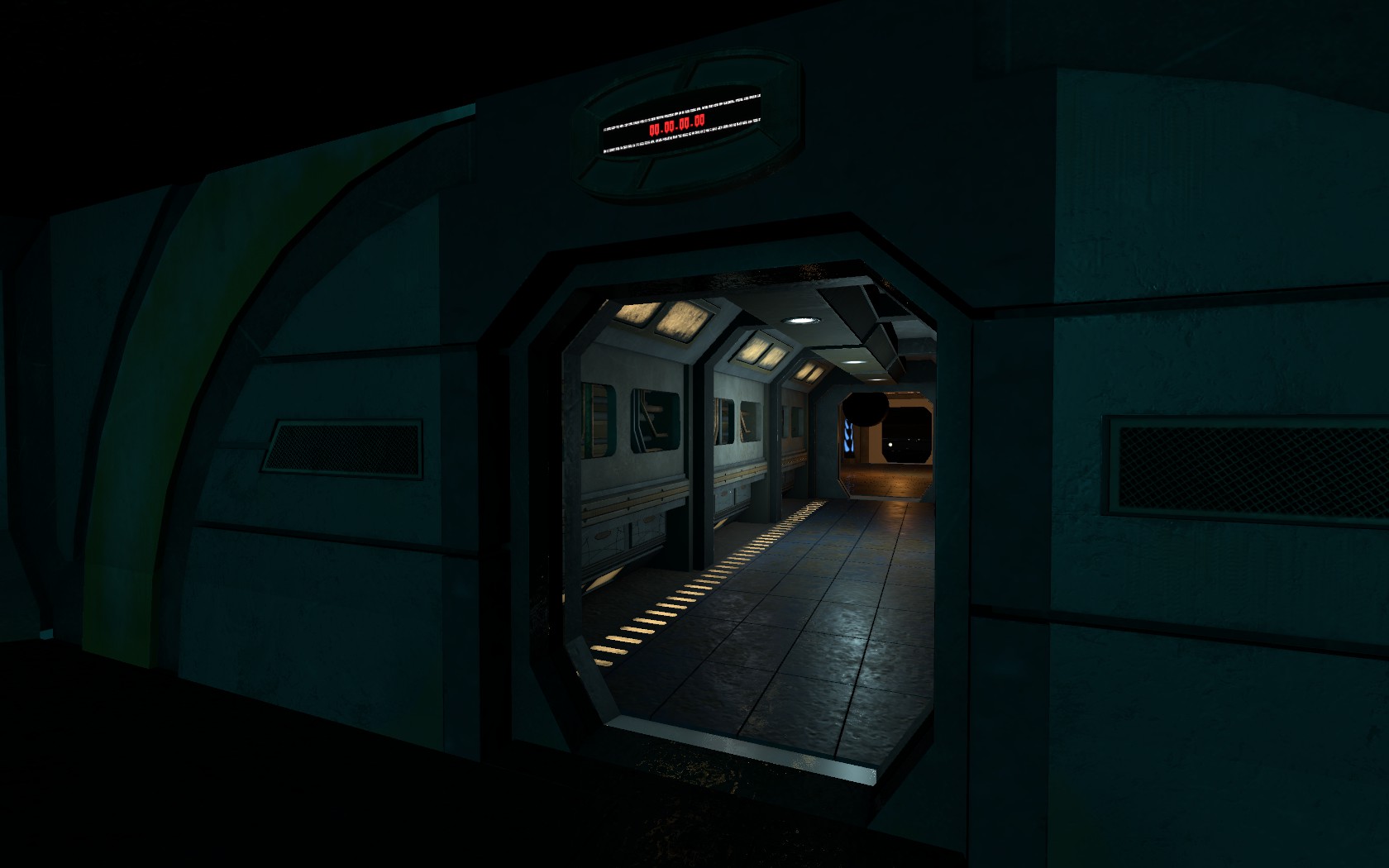 The Gateroom right now ends into a rather unique to the ship corridor. You can also see the countdown clock model. There will be several diffrent variation of those. I can currently think of three or four diffrent variations of it in the show. It's written in ancient, and before you fear I will definitely include an option so you can read this stuff without being a stargate die hard fan!
As to what it says right now. I don't even know anymore hahaha, but it usually is something pretty funny as placeholder. 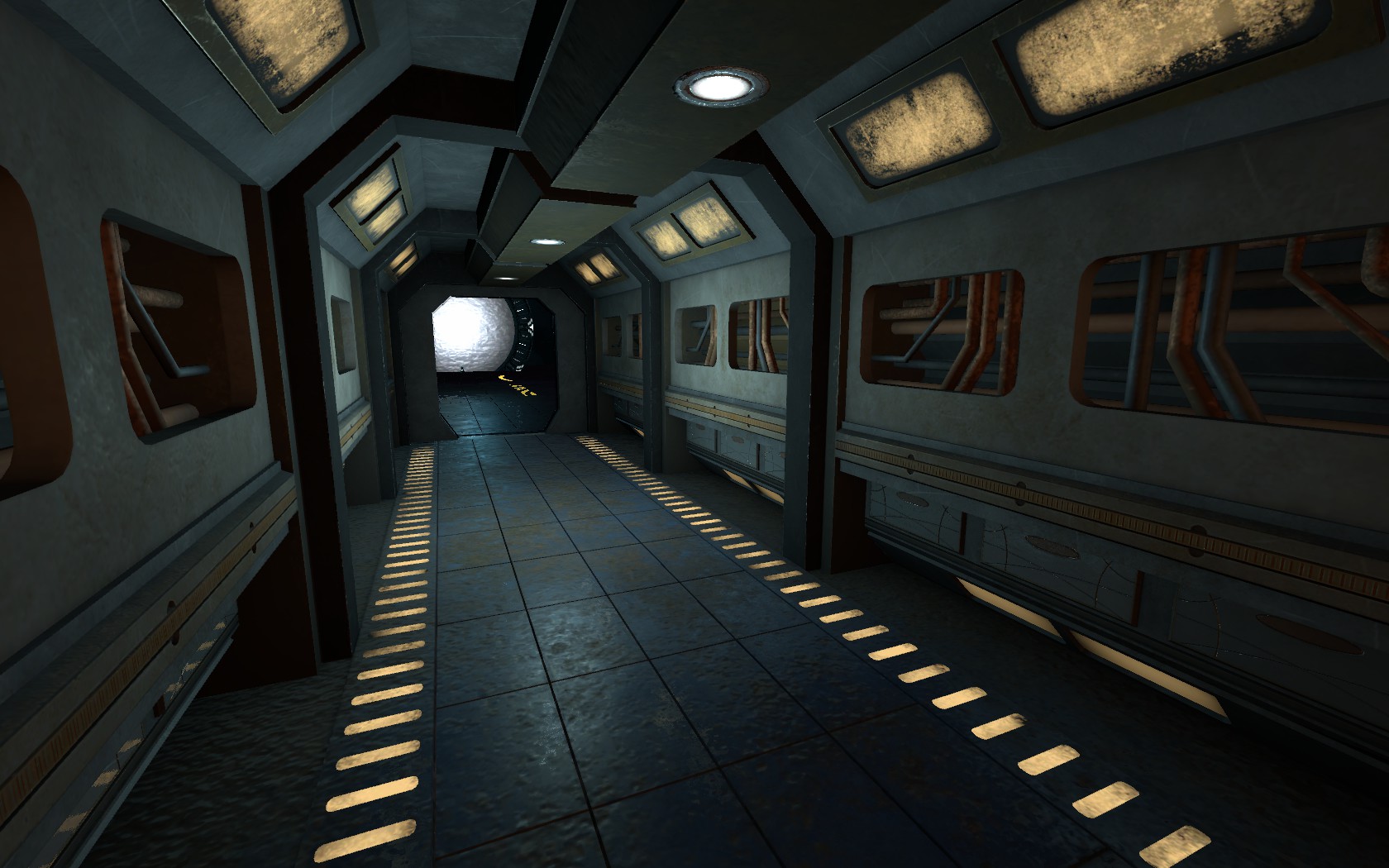 The gateroom corridor or atleast thats what I named this corridor for myself is comprised of a lot of lights. The set has been pretty modular and thats also how this will be. The pipes behind the covers can be removed. In the show they used this place for the induction charging plates and also for the suits. In a concept art you can also see it being used as bunk beds but I don't really plan on doing that. 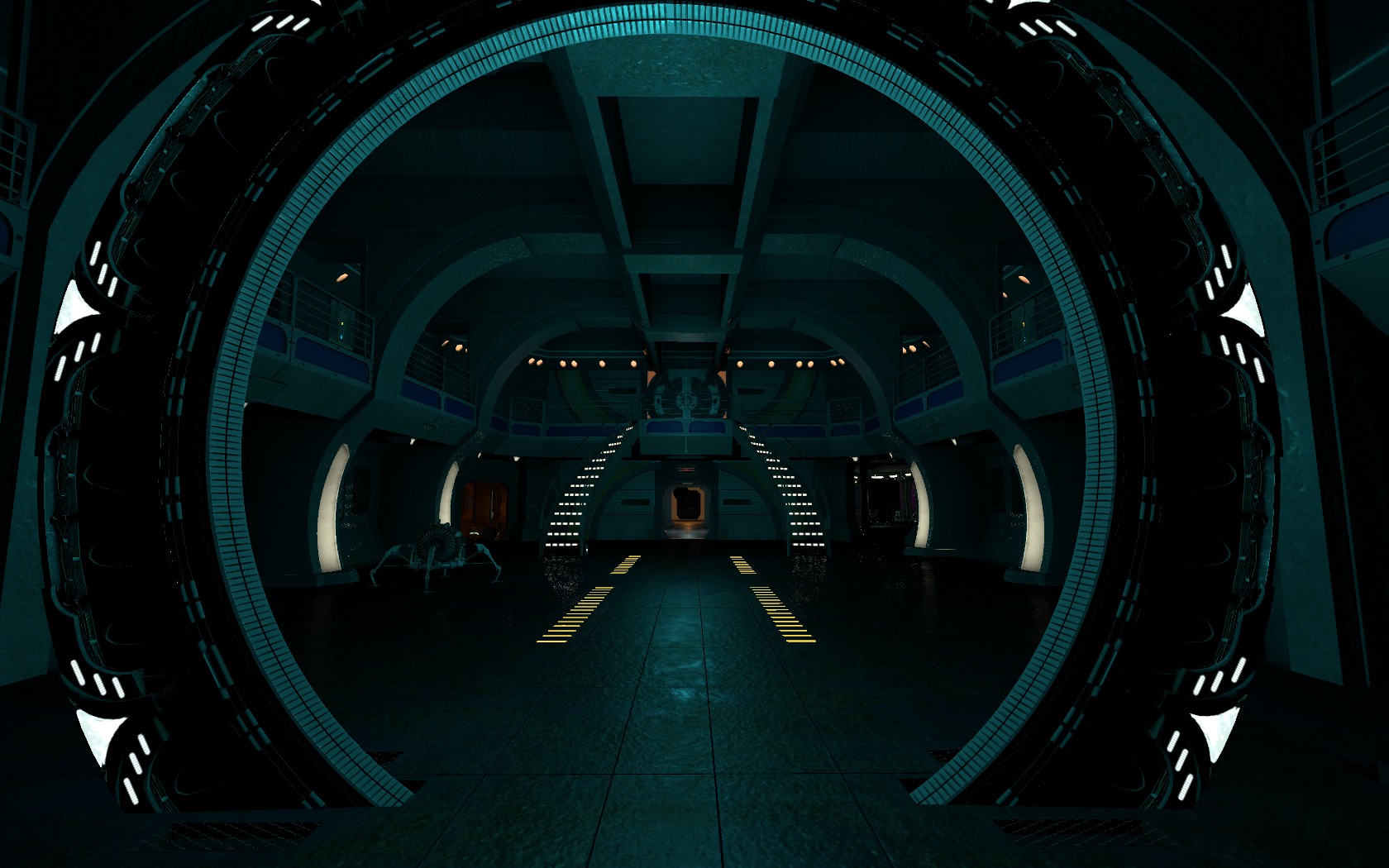 The gateroom has survived a large overwork in texturing. I think it turned out quite nicely although it isn't fully done yet. There will be consoles under the stairs which supposedly weigh the same as a car. Well this shot is also showing off SSR. You can particularly see the cool reflections of the stairs in the floor. I entirely overworked the floor material. Someone that owns a piece of the bridge floor helped me out a lot here. Shoutouts to that guy. Sadly I can't find their name, I was sure to have written it down... They send me a piece of the floor light cover in diffrent light circumstances. A huuuuge help! 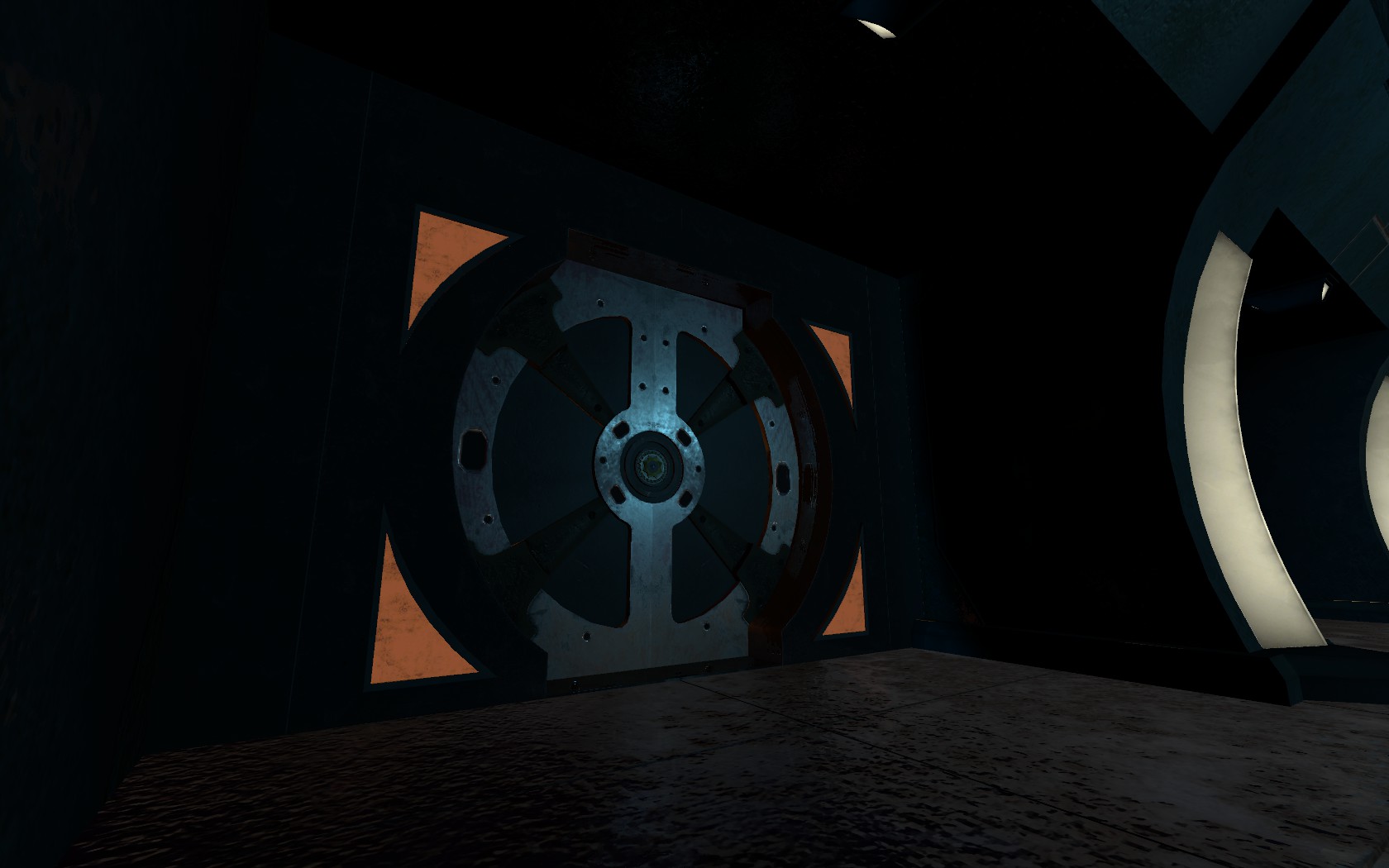 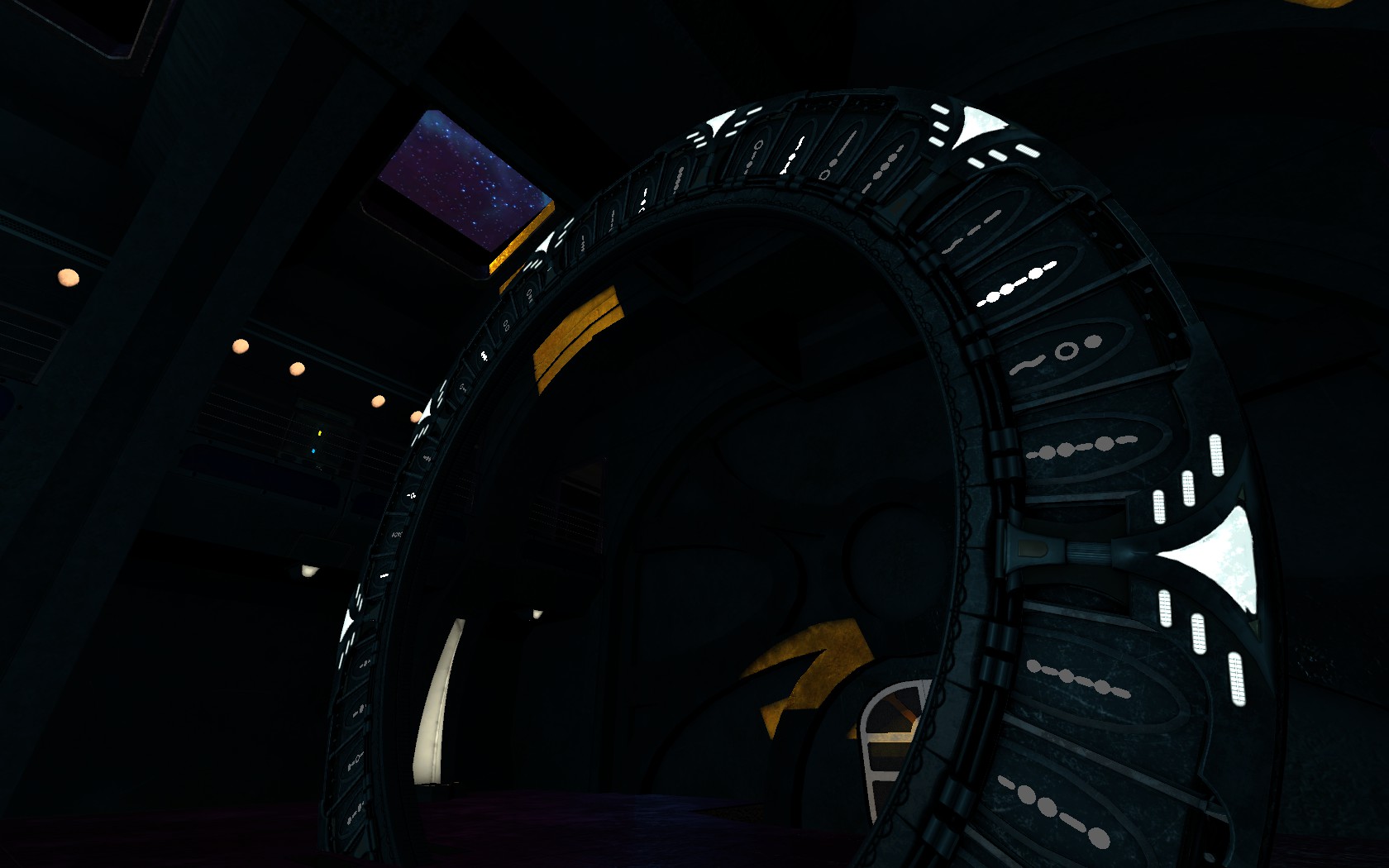 Btw the address the gate is displaying is the jungle planet. Have I mentioned that I integrated windows into the ceiling of the gateroom? No? Well yes I did it! Although in the series this room was never really confirmed to have those windows. We do see a room that has these and I will just assume it's the gateroom. Btw it has 3 on each side, but it should be 2. This is just for graphical reasons, having more holes lets more skylight in :-) Which you can also see in this shot 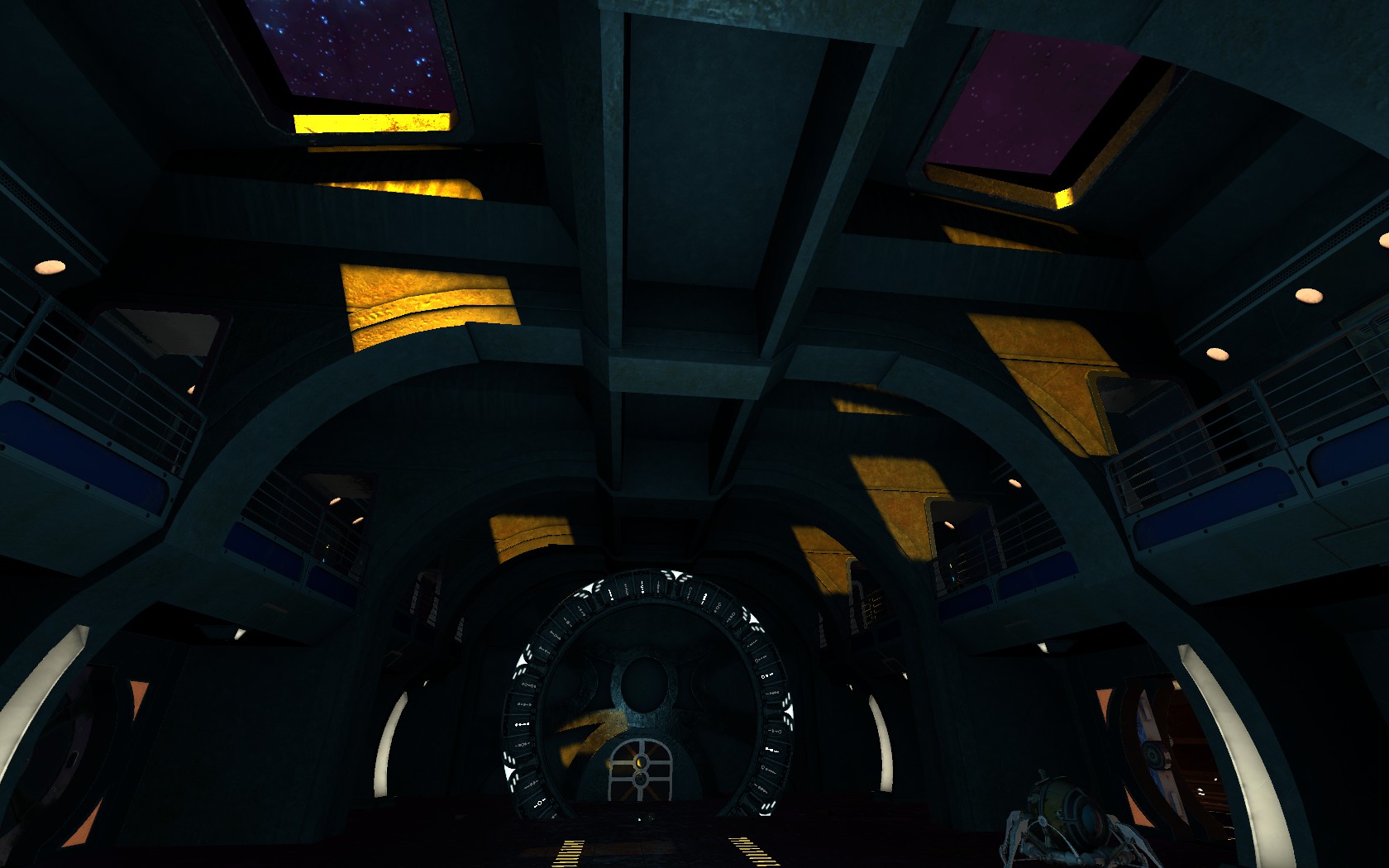 Heres some more skylight. or uh, spacelight I guess...? Space appears to be orange. Skybox by Alex_mmc btw. Cool guy.

Phew that must have been exhausting to get here, well to give some refreshment, take a seat at the bar... bar thing.... The observation deck! 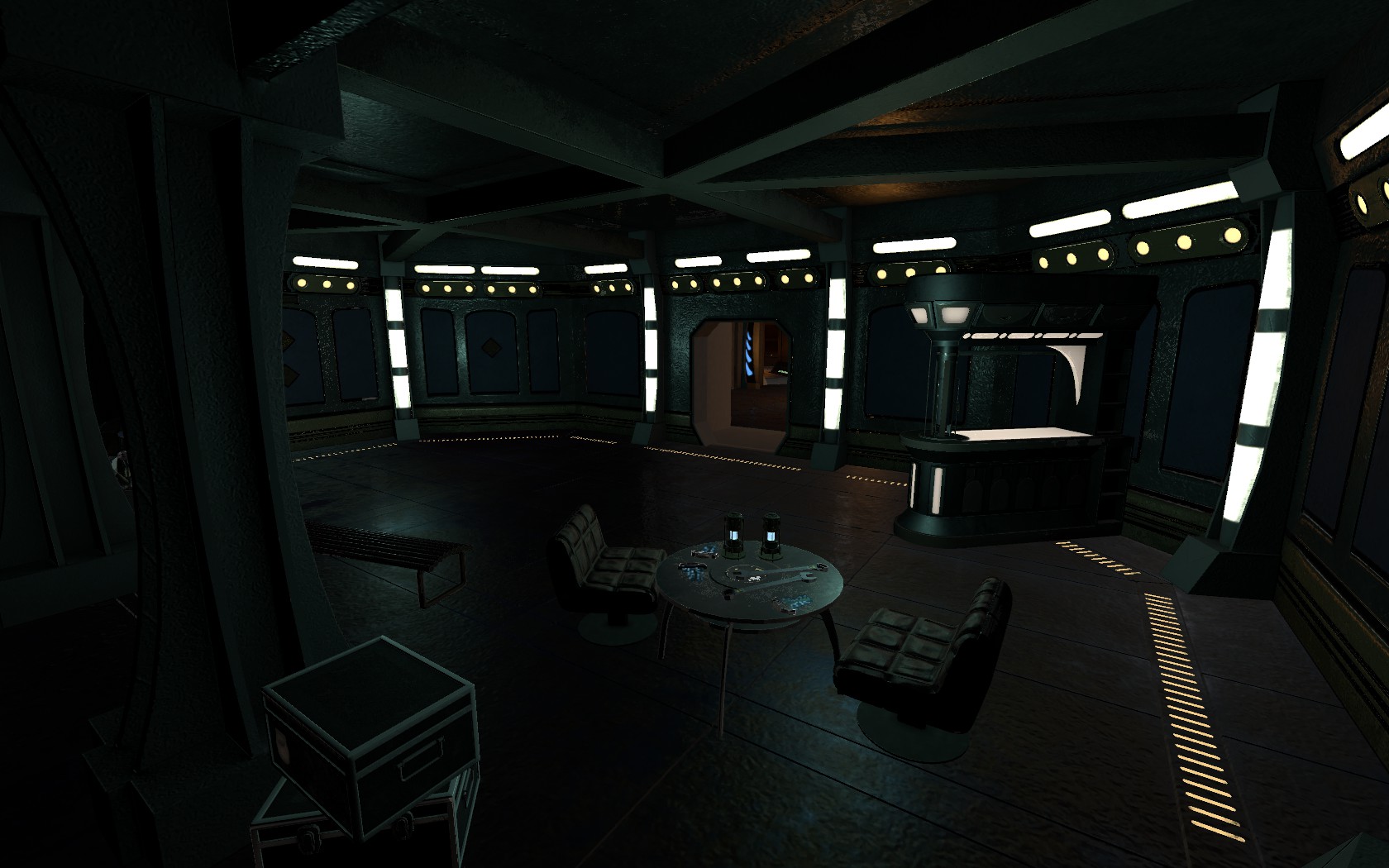 Getting this thing to work was a pain. The shapes are more complex than you think and it was pretty hard somewhat keeping a low amount of materials. This is definitely one of the more expensive setpieces here. 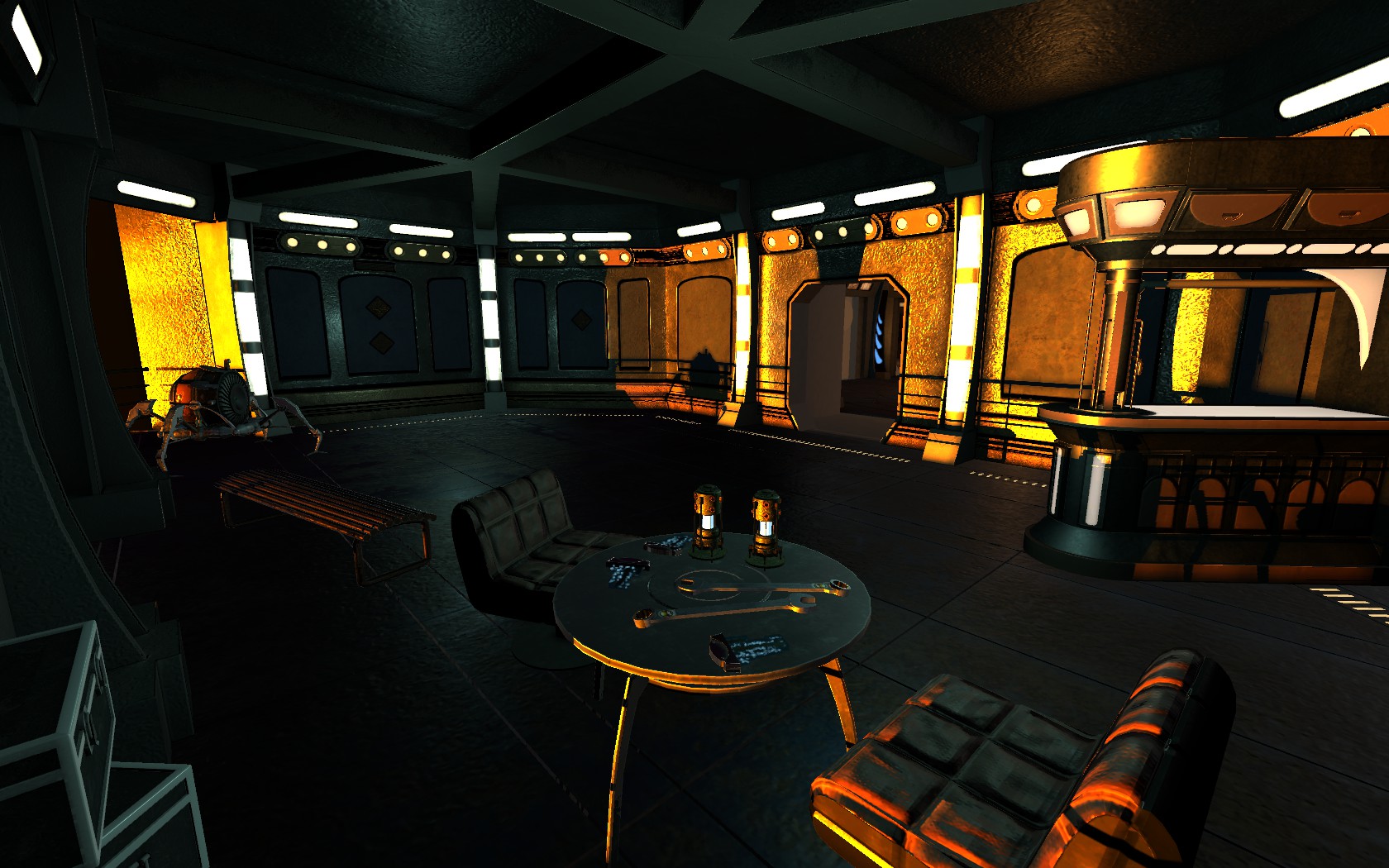 Damn it's shiny isn't it. Btw on the floor you can see some props that you will be able to find on the ship. The wrench is just a utility prop but the others are rather important props from the ship.

So yeah you might have wondered, why is it so expensive? Well guess what, apart from a lot of interior you also have the exterior. What would he observation deck be without a nice view?
You have seen it in some older pictures but have you ever seen it from up close?! No? Well here it is. The observation deck view! 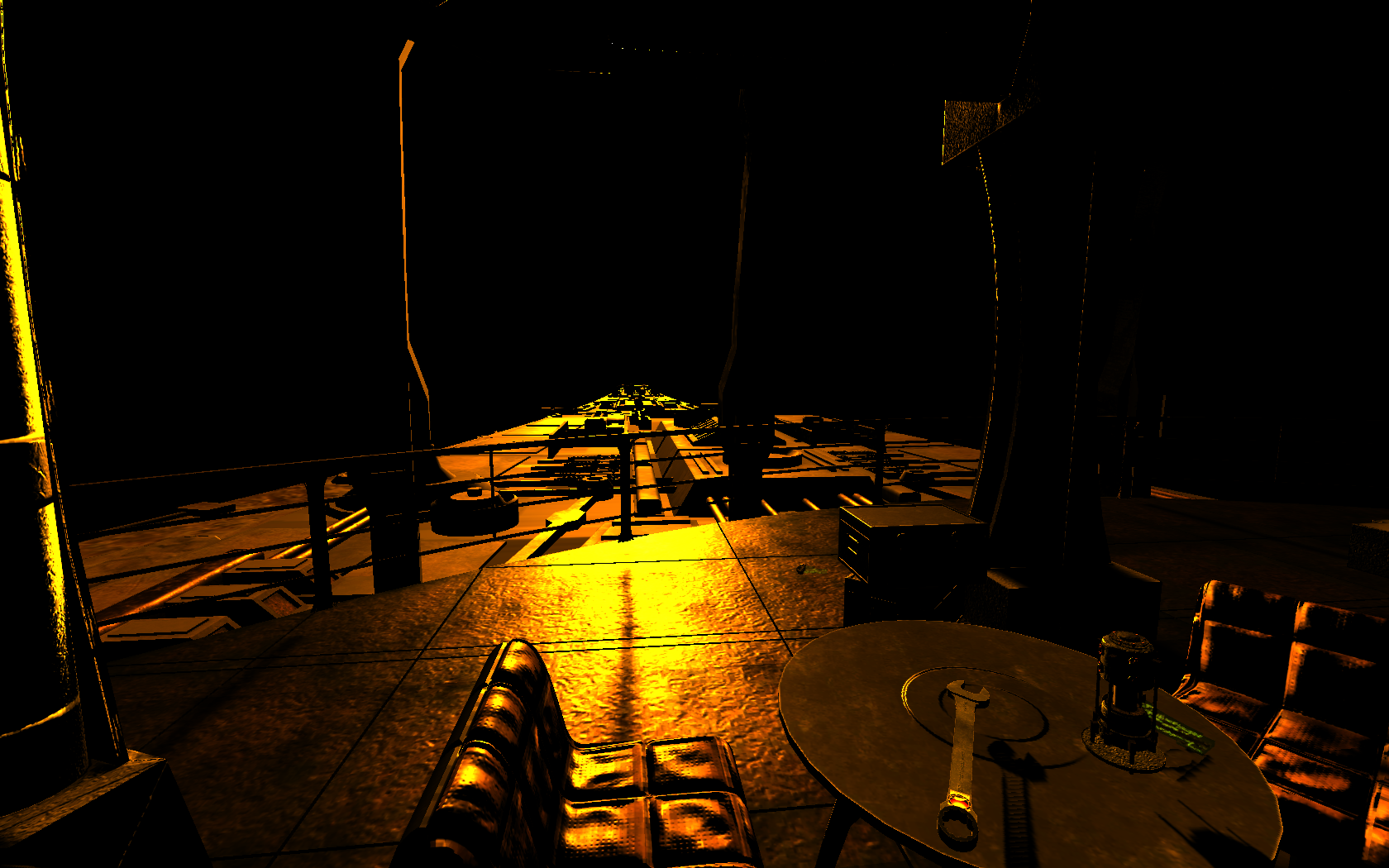 To keep it somewhat beautiful I had to artificially increase the amount of detail near the observation deck. The glass is also missing but that is certainly planned. More to that soon!
Shadows can be sorta floaty but that should be fixed later and is more or less a issue of thow the model is placed. You can overwatch half the ship here so there is a lot of stuff that needs to be loaded that also needs a lot of resolution! This scene is expensive as F!
You have probably seen the ship from the ouside in one of the other images, it underwent some changes but nothing to critical. If you were wondering why this article has taken so damn long is that I have been extremely busy. Not just with personal live, corona etc but also with this.... 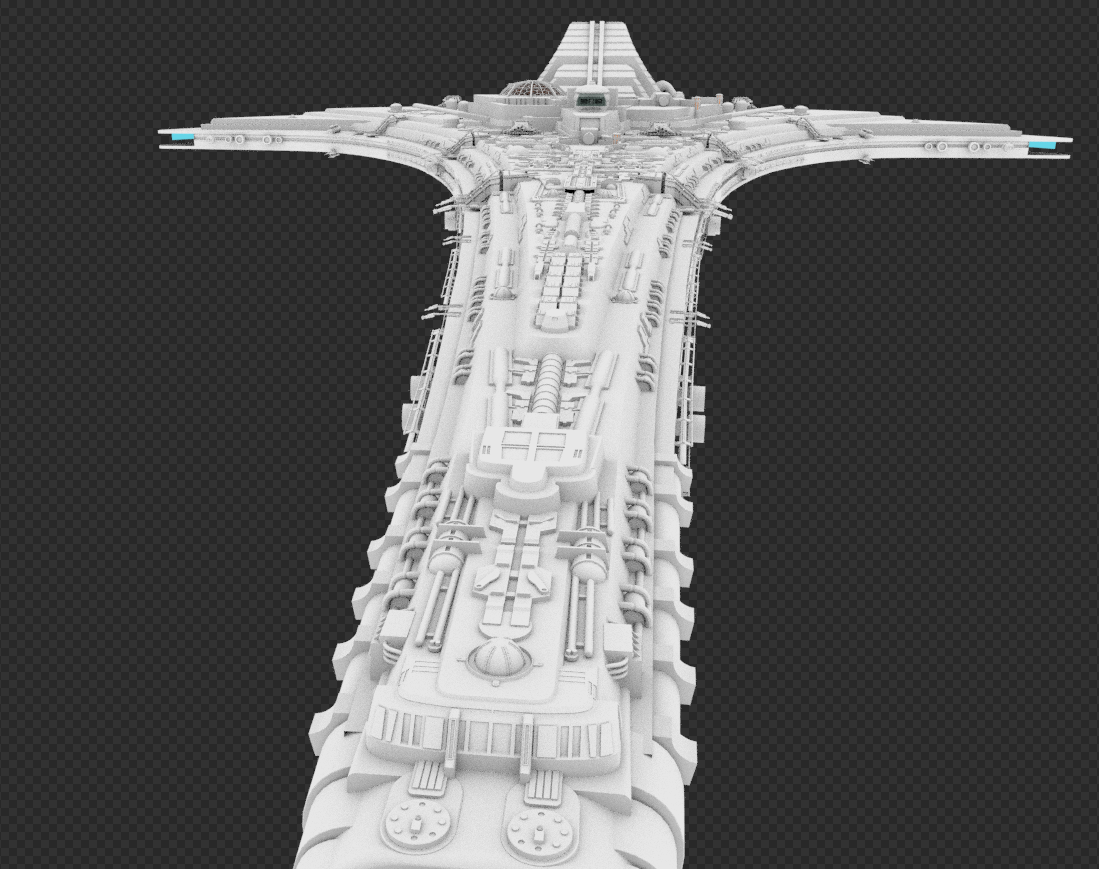 The amount of detail on this thing is bonkers, I haven't seen anything reach up to it. As for if source can handle this? hell no, but I'm not planning on just slapping it into the mod. It will be used to create cool art and also a less expensive version of the ship that will have a much higher amount of detail than the old model. Huge shoutouts to "Alx" for giving me some advice, I really appreciate it!
Also another shoutouts to "FekLeyrTarg" for providing me with camera tracked scenes from the series. Without them it would probably have been impossible to pinpoint place these details!
And while we are at it, "Ael's", "Mr.Kleiner" and "Andreyu" have been around during the development and their ongoing support really keeps this project going!
As for the engine this thing is running on, Fusrodah to "Sears","JJl77","Sárunos","OxzyBox","Bonjorno7","Totterynine" and "-Smaed" for working on this thing. This project would probably be in kindergarten right now if it wasn't for Sears and Sárunos founding AGS and letting me use it.

Since Imperial is on a break I was sort of the only person actually working on this... Well not necessarily! Dexynboy helped out in a department where I have no idea at all. Sounds! That's right, this chad has been sampling sounds from the series to use in the project and the results are mind blowing to me.
Before this the only sounds came from Carter Addon Pack.
Speaking of which I'm currently using their eventhorizon texture, because I'm to lazy to port the new one...
So yes Dexynboy has sampled some sounds and I want you to take a listen to them! Additionally they made a track to show how the interior could sound like :-)
Additionally "Harald De Luca" also allowed me to use their sampled sounds for the project aswell!
I took the time to put most of them in a video with cool background images. I hope you feel immersed as I'am. Wandering around in the ship even though it's very small right now is beyond satisfying.

Ah thinking of which, it's technically possible to put this into gmod.-Something atleast 20 people have asked for. Although Gmod allows for the PBR shader, only the 32bit branch, it doesn't have the sophisticated graphics that AGS runs on.
Just to test it out I actually slopped it in and played with Cryptalchemy. We had a blast, roleplaying how we would just nuke the nakai with the stargate. Yeah it's just as it sounds like, it made no sense at all haha. But we came up with crazy ideas and even did some planning out for other stuff in the Gateroom!
So yeah it's possible but I'm currently not planning on making it actually workshop compatible... sorry!

To get back to the topic of development, I also have to show off this cool P90 model
Some die-hard fans will probably point out that they didn't have these in SGU. But I thought cmon why not? Spoiler, this thing isn't 100% realistic. Who would have thought.... 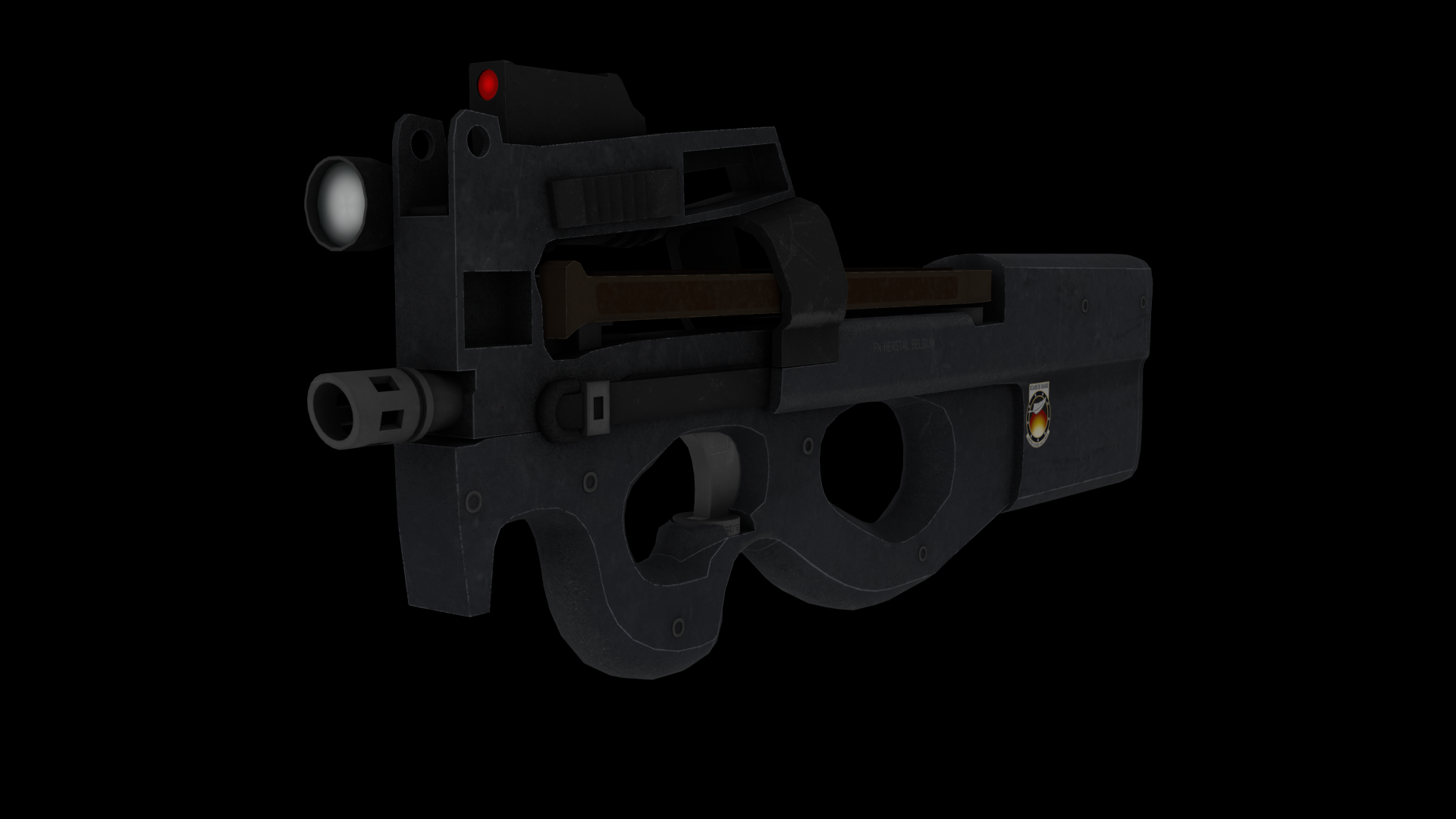 Shoutout's to "silent" from RTB:R ( and various other projects ) for doing the animations! They look amazing!
Wait guns? Yeah that's right. Although the focus of the mod will be on exploring the ship and also some planets ( Under some, Terminus ) we do atleast want *some* firefights.... That being said any weapons created will be those that have been seen before in any of the shows!
Wait what's that sticker?
OHO, you have noticed another thing I wanted to show off. I recreated a bunch of the patches seen in the series's. Don't worry I won't be using all of them. Specifically something like the NID or Air Force ones. Why? Well they probably have some kind of copyright on them or something and i'd rather stay away from that. But the other ones should be fine! 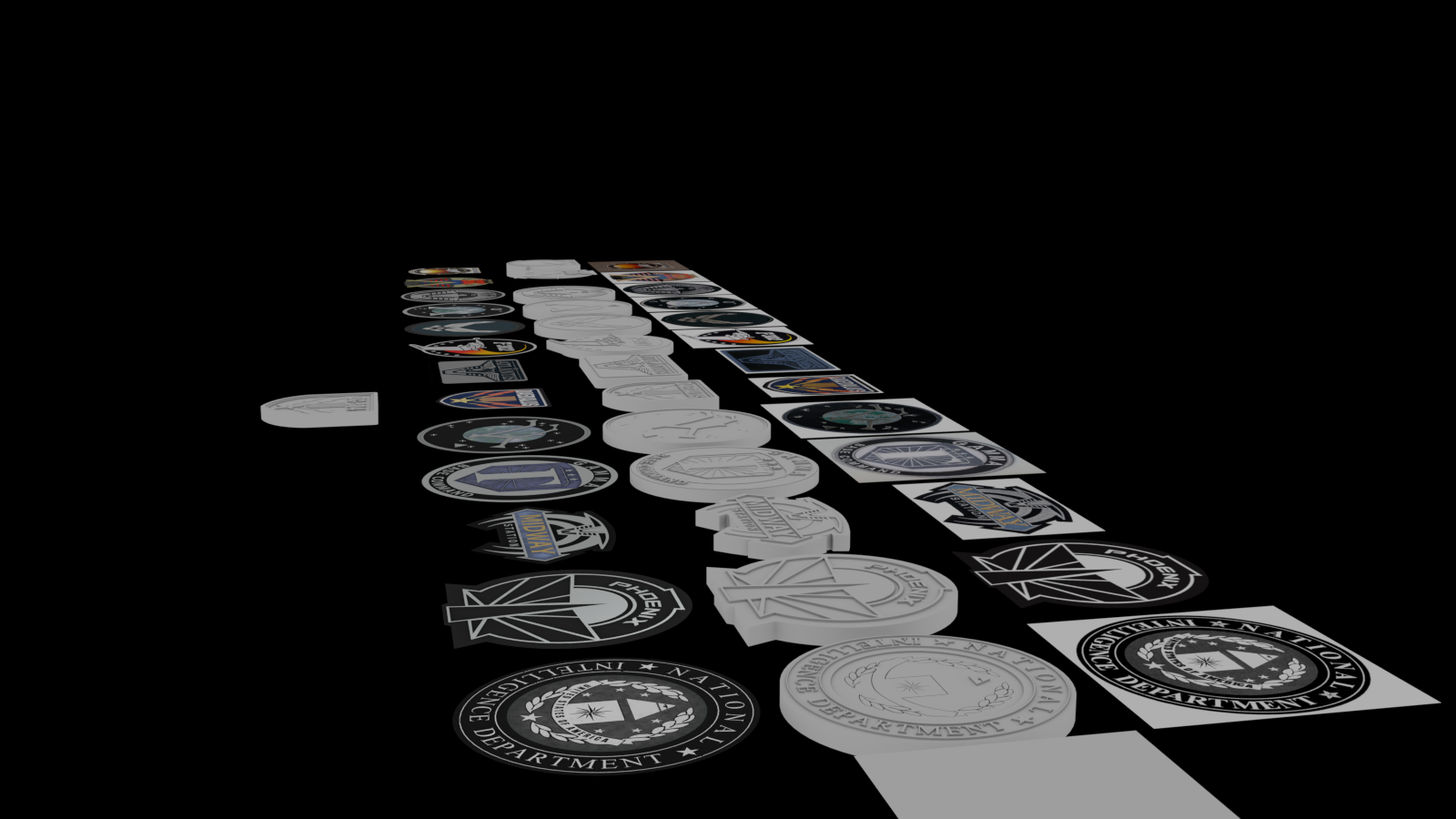 Some of these I uploaded to Deviant Art, so you can download the STL and print them ( I think..? I never tried! )
Link to the Patches on Deviant Art

There's way more stuff but the article is long enough as is! If you want to get into contact or actively follow development. You can do that on various Community Servers. Mainly VMC ( Valve Modding Community ) and also the Astria Porta Discord server! :-)

Join the Astria Porta Discord server!
I hope you had fun reading and till next time!

Just started playing Alien: Isolation so I'm really in the mood for more Sci-Fi. Out of all the Stargate: SG1 mods that have been teased on MODDB, I hope this is the one that makes it! :)

Thanks. I think the only xenos the shipa are phobes. They didn't really have luck with aliens... or the isolation from earth :-)

Hopefully this one sees a full release! :3

Wow, this is so far the best recreation of Destiny's interior ever! Well done!

Please continue your work and also consider making a Patreon profile for your work here. I'd totally support you!

Hopefully we'll see this in GMOD in some way, shape or form. :)

The best way you can support the project is by just sticking around!
As for a patreon page, I don't think doing official $$$ donation stuff is a good idea with the current situation of Stargate Network

It never ceases to amaze me what a small group of people can do when everyone clicks. Great project looking forward to trying it out. Cheers