I promised to talk about Generated Content in the next news post. Various work wend on in parallel so it took a bit longer. So here goes nothing.

One aim of this project is to make a game where the player really does investigate the story not just follow a red thread disallowed to side step one bit. To achieve this the story in this game modifies as the player progresses, and especially how he progresses. New NPCs and locations will be added to the story as the situation requires. To achieve this the game has to be able to generate location content to provide the scenes required. The video below outlines the result and how it is done from a mapper perspective. In contrary to other videos it is voiced.

In a nutshell the game supports defining generated content in separate world files. Inside the game world are placed PlaceholderBuildingPart. If desired to generate content one world file chosen at random is generated. This includes hallways and flats (rooms). Trying to enter flats generates more content. Classes like RandomGenerateStub (load from random world file) and RandomElement (pick random class) eventually produce the final props populating the new areas. All this properly persist with save states hence the game world grows with each new content and the new content persists.

Besides this more stuff has been done.

Support for new platforms has been added. Drag[en]gine basically works now also on MacOS platform (no IGDE yet). Still working on the details and removing some problems but it works.

But that's not stopping. Android platform is basically working too using DELGA files. What is DELGA? I'll tell you later :D .

Last but not least for those in the knows Haiku-OS basic supports works too. 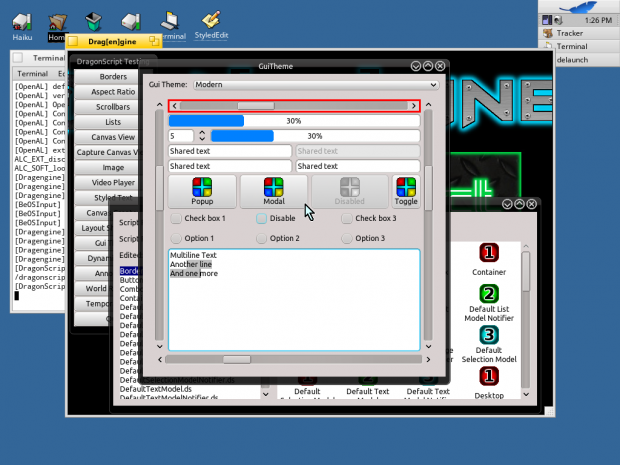 That has been quite a lot of work recently, especially code wise. What's coming up next I'll leave up to you to discover. After all this is a detective game, isn't it? ;)

You never cease to amaze me with new content updates! Question, has it been stated if this will be going on Steam or not? If so I'd love to see a crowd-funding campaign started to get the funds needed to get it on Steam Direct.

Thanks for the update, hyped for more!

Really great stuff. Do you plan on adding more control to the random generation (how much money does the occupant have, does he prefer any "style", how clean is he, ..)?

This can be done using property replacements. I have not explained this in detail although it can be seen in the video in one place. Element properties can have "{variable}" tokens inside which can be replaced at generation time with a value.

Styles for props have for example"random{@random:8}" so styles with names "random1".."random8" are picked. Could be set though to "{type}{@random:8}" with "type" set to "poor" before generating. Then props would get styles picked named "poor1".."poor8".

So yes, different layouts and styles can be generated this way as the need arises. It's quite flexible so modders have got something to play with :D