The final post in a series where we discuss our character creation process.

Posted by TheManWhoFlewAway on Mar 22nd, 2015

In our last post we outlined the process of UV mapping and texturing our 'casual' and 'action' Kit character models. In our third and final post of the current series, we outline the process of rigging, weighting and animating Kit in 3D before demonstrating his updated 2D animations.

Our 3D artist/composer Peter Satera has been busy working on Kit's land and sea-based animations. Below he describes the rigging process:

PS: Like almost any character in 3D animation, Kit was in need of a diverse rig which allowed him to run through any range of motion the game called for. Since we decided to opt for 2D sprites only to compose our final scenes, Kit's rig doesn't have the same restrictions as a game rig would have. Weight and bone/joint influences aren't a concern; I don't need to integrate the rig into Unity's Mecanim system so instead can use Lightwave 3Ds bipedal rigs: additional muscle and movement compensations which allow for better deformation and quicker workflows.

The skeletal rig was set up using Lightwaves biped system 'Genoma'. I've created custom rigs before and Genoma has proven its robustness through testing and speed so I've come to really like it. 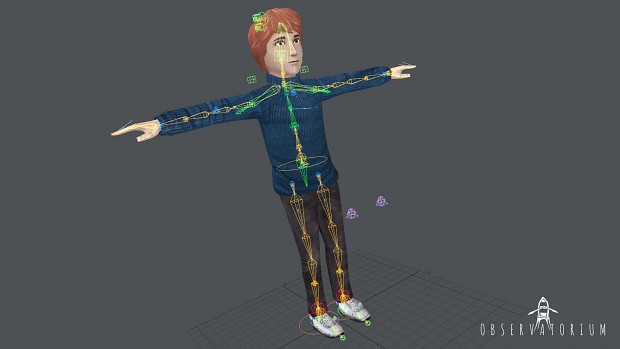 PS: The next stage was to weight Kit. Genoma makes a great first pass of deformation but for complete deformation control I decided to weight Kit's body parts myself. Here's a look the weights assigned in Kit's casual mesh: 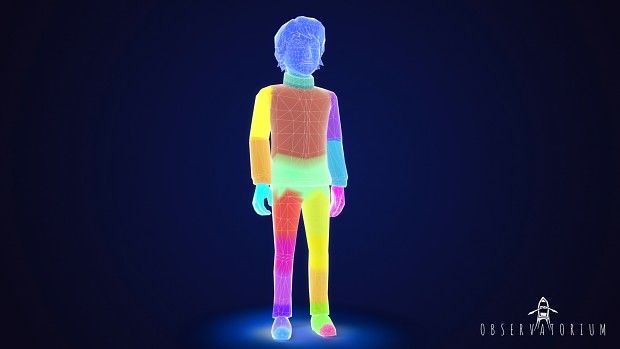 PS: Once Kit's 'casual' rig was running smoothly I ran him through some test poses and movements just to make sure his deformation was working well. Once everything looked great I then ran through the weighting process once again with Kit's 'action' model: making sure all weights were named the same.

With Kit being the same size in both models, all I needed to do was replace the model; Lightwave swapped out the model and automatically reassigning the weights of the old model to the new one. I then ran through some tests with this Kit too. Here's an example from Kit's rowing animation: 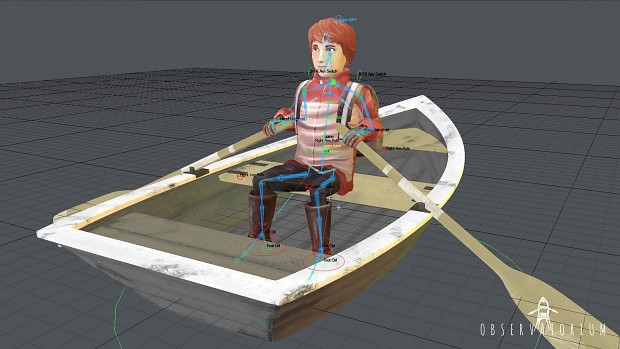 Converting the 3D Animation back to 2D

Once Peter was happy with the animations, he rendered them out as a series of frames before turning them into sprite sheets, ready to be implemented in our game. Below are some examples from Kit's idle, walking and jogging spritesheets which I feed into Unitys Mecanim system: 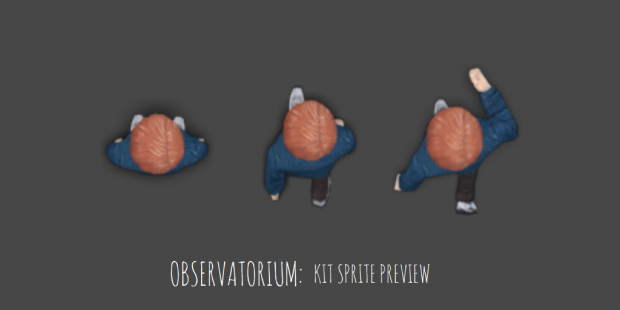 For tips on how to work with Unitys Mecanim system you should check one of our previous posts here where we go into detail about how to get your scripts and animations talking to each other.

The video below provides a look at Kit's revised rowing animation:

That's it for the 'Constructing Kit' series.

We hope you've enjoyed reading about our Kit redesign and our 3D to 2D process which we'll be following for a few more of our important game assets. We're currently hard at work on the Alpha version of the game and hope to share more environment and gameplay examples with you soon.

If you have any comments or suggestions please post below and we will try and respond.

Fantastic. Thank you, Clive and Peter, for a (as usual) thorough and informative examination of your process!

I just read the series of articles "Construction Kit" but I wonder why you are converting your 3d models to sprites. I guess it was an informed choice but I have some troubles understanding the reason. Would you mind explaining this ?

I mean, you have really great 3d models, textured, rigged (almost ready for the game except the missing parts you highlighted), a quite powerful 3d game engine and you target platforms able to display full 3d graphics.

Right now, I can't think of an advantage to converting to 2D.
However, I see a disadvantage which is : it makes shading (which is now easy to do in 3D) hard to do.

Another game I know (Project Zomboid) does this (converting 3d to 2d), the reason is that they want to have a pixel-art style, which is hard to do with 3d models. The other difference is that they have an isometric perspective, and the lack of good lighting is even more detrimental.

I am convinced that a good lighting (especially with the lantern on the boat and the glowing fishes) would look awesome in Observatorium and would be easier to do in 3D.

That's all, I hope I doesn't sound too rude, my English is not perfect.
Keep up the good work !

Hi yhoyhoj - thanks for your response!

You are not being rude at all - this is a very valid argument.

We did think hard about 2D vs 3D for the project and decided that since the gameplay camera is top-down orthographic we figured it would be alot of wasted effort to build the entire game in 3D.

If you've read some of our previous posts you'll see why the gameplay is forced to orthographic camera - the main reason is the synergy between stars and sealife.

One of the main reasons we wanted to build Kit (and some of the sea-life) in 3D was so we can turn around animations much faster. We have a few detailed sequences planned for Kit and so wanted to consider him from all angles so we could make sure his top-down animations appear to make sense (you will sometimes see him lying back or crouched over).

Lighting is definitely a concern and something we're investigating right now as part of our environment tests. We may end up simplifying the texturing on Kit's character model as part of this process to make sure everything fits together nicely.

We hope to share some proper environment artwork soon.

love the melancholic music. is that we fella on a journey of hope??

Music in the video is by Peter Satera (link to his profile near top of article) and he'll be doing all of the game music.

Wow. This looks so awesome, tracking!

Glad to see more folks commenting and getting in on this cool game :)