Twitter summary about new features for mappers and modellers.

Besides this new features have been added and existing ones improved.

Constructed Textures are a new feature extending the possibilities of skin creation in the engine. You can now define the content of a texture property not only with a color, image or video but also using a construction. Constructed textures work similar to a DTP (Desktop Publishing) type software in that you can place images, shapes and text into a canvas which the graphic module then turns into an actual texture.

This has many uses with the video below showing one of them. Create new variations of textures without needing to go back to your 2D Graphic Application. This cuts down on production time and reduces distribution file size. You get more varied textures and still have space to cram in the really important things.

You can do also funny things with constructed textures.

Caching has been improved to reduce loading times and overall improving engine performance. Caching is fully transparent and per-module-per-game. Also added in the GUI Launcher a Disc Usage tab where users can check out how much disk space their installed games consume. The Drag[en]gine forces game-data, config/saves and screenshots/videos into own directories so backing up and restoring config/saves is easy and not "hidden" (as in most games). The cache limits can be individually adjusted and default to 1GB. I set it down to 100MB for testing in this screenshot. 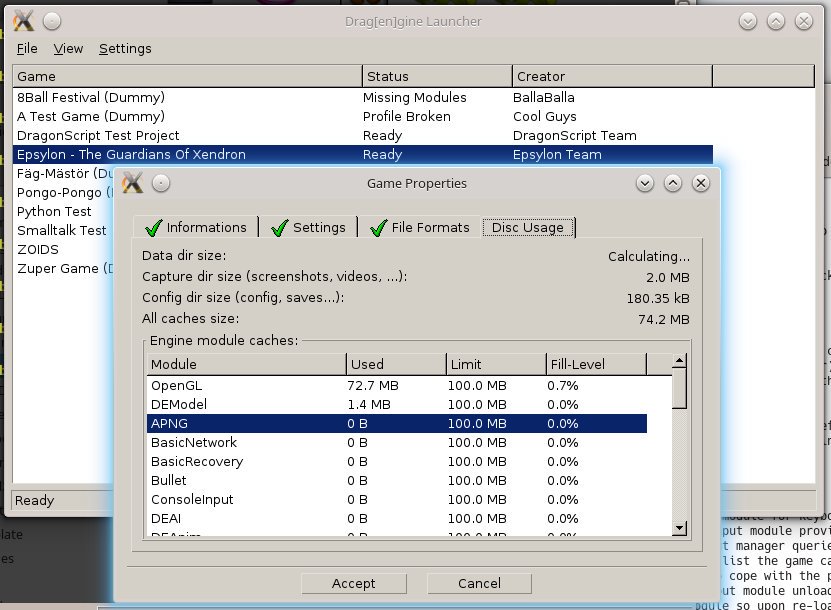 Variation textures introduce a new set of Texture Properties: variation.u and variation.v . These texture properties have been added to deal with the old aged problem of tiling artefacts with textures on large surfaces (ground, wall, facade, ceiling). With variation textures enabled many texture properties are allowed to have depth (width x height x depth/layers). Each layer defines one variation of the texture. The graphic module then picks for each repetition/tiling of the texture one layer at random. As a result the tiling artefacts are reduced a lot since their repetition is no more grid like but random. This avoids the need to place tons of decals on surfaces to hide tiling artefacts or placing random props in the world where they make no sense. Allows you to place props where they are required and sound not where they hide problems.

Constructed texture obviously are a prime choice to do such variations but you can also create 3D Image Files and use those. The Drag[en]gine provides a "poor mans" 3D Image format by default (*.png3d) which is nothing but a Tar-Archive of individual PNG files representing the individual layers.

The video below shows an illustration example how this system works.

Be surprised... I won't disclose... at least not here. Follow on twitter for regular news or wait for larger ones here on IndieDB.