The first 2 weeks of march brought several things, which you can sum up as work in progress.

Hello, This time i bring you some 'real' news. There are many new things to present, so lets start with the development section.

Oblivion, which some of you might know from a pretty popular UT3 mod, got into the world of low poly modeling. During the last days he made 4 models. 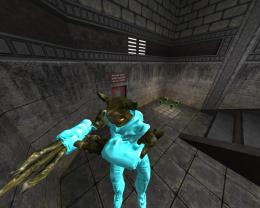 Gak, which is more or less avaible in nexuiz. Just a few adjustments are needed. 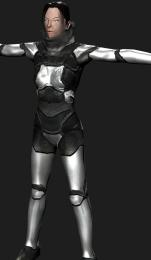 Pyria, a remake of the model, which is already in the game. It needs to be rigged. 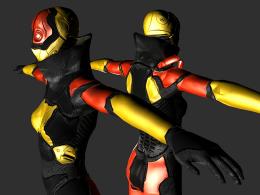 Umbra, it gave the basics for the Pyria remake. This one also needs to be rigged. 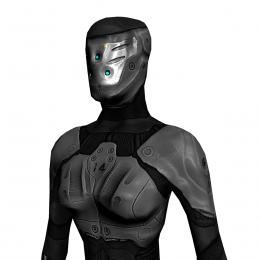 The last one is Epsilon 14 and it also waits to be rigged. So if you know something about animating and you are willing to help, head over to the editing section of the alientrap forums, where you download the models. 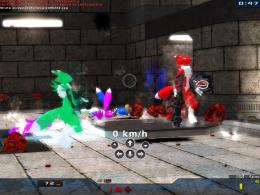 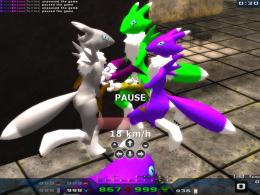 If you think ' Hey, this could be my new playermodel!' grab it here:
Alientrap.org

As you know from the last new tZork is working on vehicles for Nexuiz also there are some news.
But first i would like to show you the Wakizashi showcase.


Then there the spiderbots, which recieved a new hud these days.

There where a bunch of complaints about the new hud, which was introduced with 2.5. So FruitieX and Dib took it as a reason to make it more handy and optimise it for your own playing style.


As always there are some map updates and new release. djsupport (firefly) and i (downer) updated our maps. these updates can be found here: Alientrap.org
Alientrap.org

There was also new release, which came from Sepelio. He did a quiet good job on the visuals and also on the game (as far as i can tell you after onne round of minsta on it)
Grab this map here: Alientrap.org

Bartuc's 50 brush contest lead to some supprising results. You can find them from this post onwards: Alientrap.org

So thats it for now, if you have any questions regarding features of nexuiz and gameplay aspects, ask them. If you want a show off features, tell me (I will see what i can arrange).

that hud is impressive. i dont like the game itself, cause quake live and warsow are better, but this hud is really something.

if you dont like the game give some examples why? there are always people open for changes

I sincerely hope Renamon is not part of the game.

- Even reporting it as news, it's a CONVERSION of another's model. I don't even see the author's credit who made it clear in the news.
- It's also a furry model, those are subject to ridiculous overprotection of sue threats from authors even if it's fan art or even a conversion from another game
- It's also IP of Bandai or so. If you know what Digimon is, you know this is a no-no to showcase IP infringement as news for another game. This is BAD
- Unrelated, but furry avatars are the first step to tainting a game's fanbase. It's proven in history with Doom (no attention until Tails appeared in Skulltag, and now the community is overrun with incompetence...) Considering Nexuiz already has a fork that's exclusively furry as well (and vorey, ew) it's already on the highway to yiffhell.

If you think i'm crazy, there's no denying some furry mentality phenomenon when something is an animal. on two legs. big/bigger than humans. Particularily canine based.

Yes, I tried to put this comment as positive and unbiased as I could. The tl;dr version:

I agree with leilei; furries are the bane of any community. I don't believe I've ever encountered a competent furry player.

I think most people have no idea what you are talking about. And I get *all* /b/ jokes. So we are safe... mostly.

Have you played TF2?

Not long enough. You've never seen a "HORSEDICK" associated with like 5 furry steam groups that takes a Sniper slot just to hang in the ready room shooting at the wall repeatedly, for 'the lulz' (yeah because being a retard is apparently funny). A lot of them do this too, this is just one top-of-the-head example.

And then there's maps by them that must put their fursona in. cp_orange_x3 is an example. There's no proper place for a huge white wolf head.

And finally there is... ANIMAL FORTRESS >_<

No, I have not played enough. As a dev, I like Quake and all Quake things, but as a gamer turret defense games and battlefield-like games are more my thing. I don't like TF2 much.. hum.. QuakeWorld versions of TF are better, methinks.