In this post I will explain what we are trying to achieve with our combat design, and why. In short we wanted to simplify the RPG Stats'N Skills, but (a very important but) without loosing the great tactical depth and variation that the AD&D rules allows. (Read: big hairy goal)

In this post I will explain what we are trying to achieve with our combat system, and why.
In short we wanted to simplify the RPG Stats'N Skills, but (a very important but) without loosing the great tactical depth and variation that the AD&D rules allows. It's a big hairy goal, we know!

First we threw out stats like STR, INT, DEX, VIT, etc. We kept HP and made a mix of Stamina and Mana and called it Energy.

Our combat is based on standard old school turn-based system and we have 3 tactical stages.
The combat rules are equal and applicable to all units in combat whether they are PC, NPC, Friend or Foe. 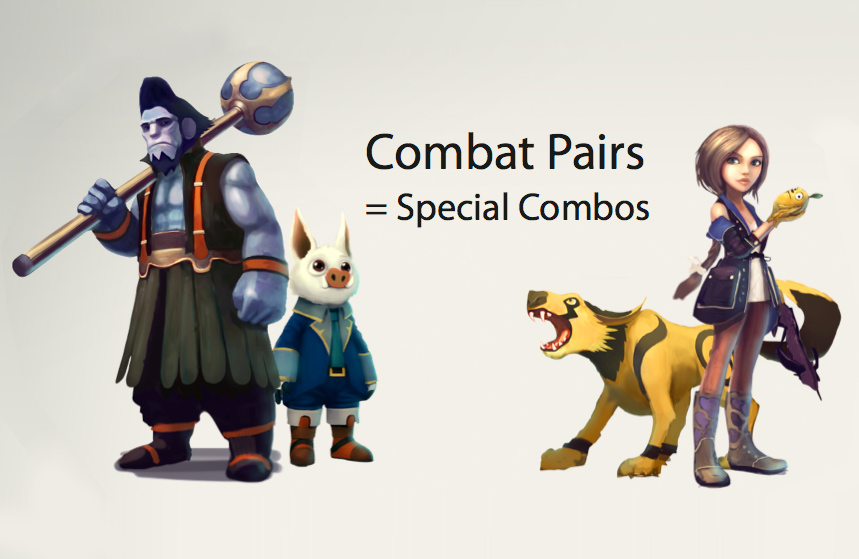 First off we wanted to add an extra element to setting up your team members by allowing you to pair up two players. The pair will become one combat unit and get extra combo abilities, so mixing up your players in different ways will unlock different combo abilities.

A Pair consists of one Fighter and one Protector.
When Paired the Protector will get one or more unique abilities that affects the Fighter.
The Fighter will have access to the magical energy that will enable the use of magical attacks. 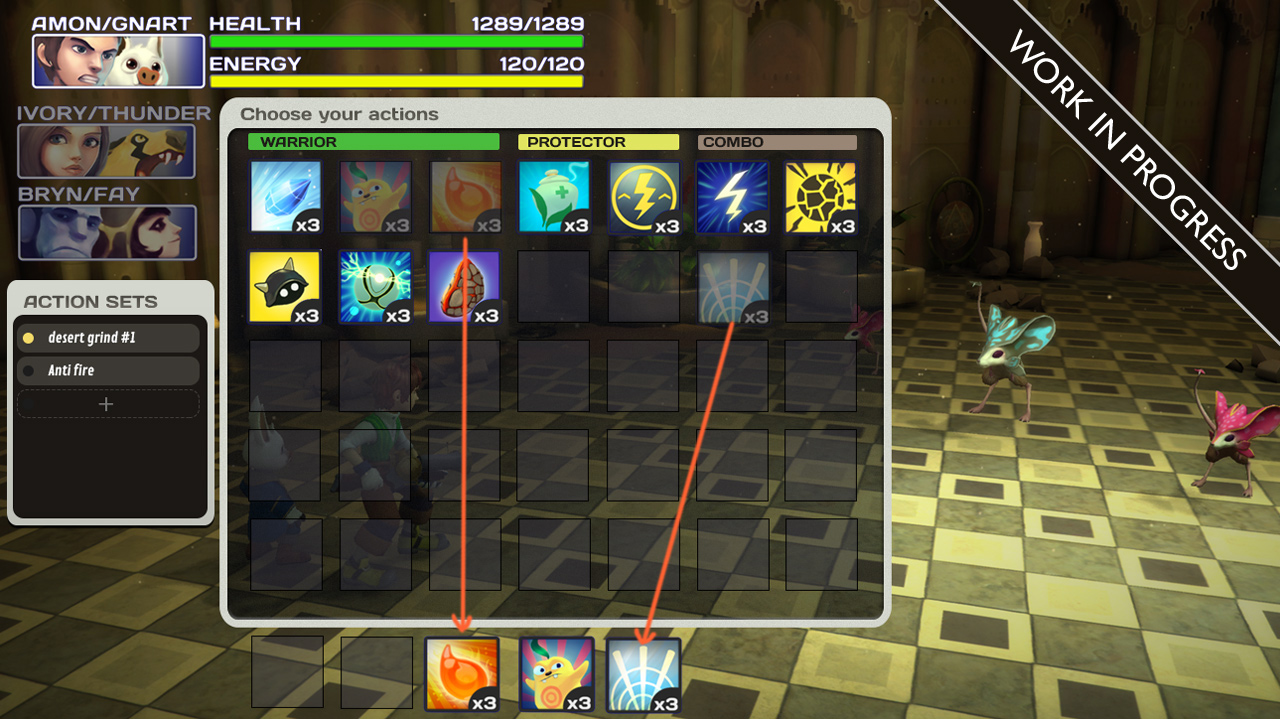 2. Choose what abilities to bring into battle

From the larger amount of combat actions (both combo and solo actions) you will need to pick out a limited number that will be available in combat. You might start off with only 3 slots (5 on the image above) and at a later time max out at 12 or 18 slots. The Action selection sets (Menu to the left) can be saved for quick selection. The Combat Action selection can be chosen just before going into battle, when you know what you are up against.

This idea was inspired by how you need to choose a limited amount of plants before starting a battle in Plants vs Zombies. Reducing the player's options makes for more fun gameplay - in many cases.

There are 4 types of actions. 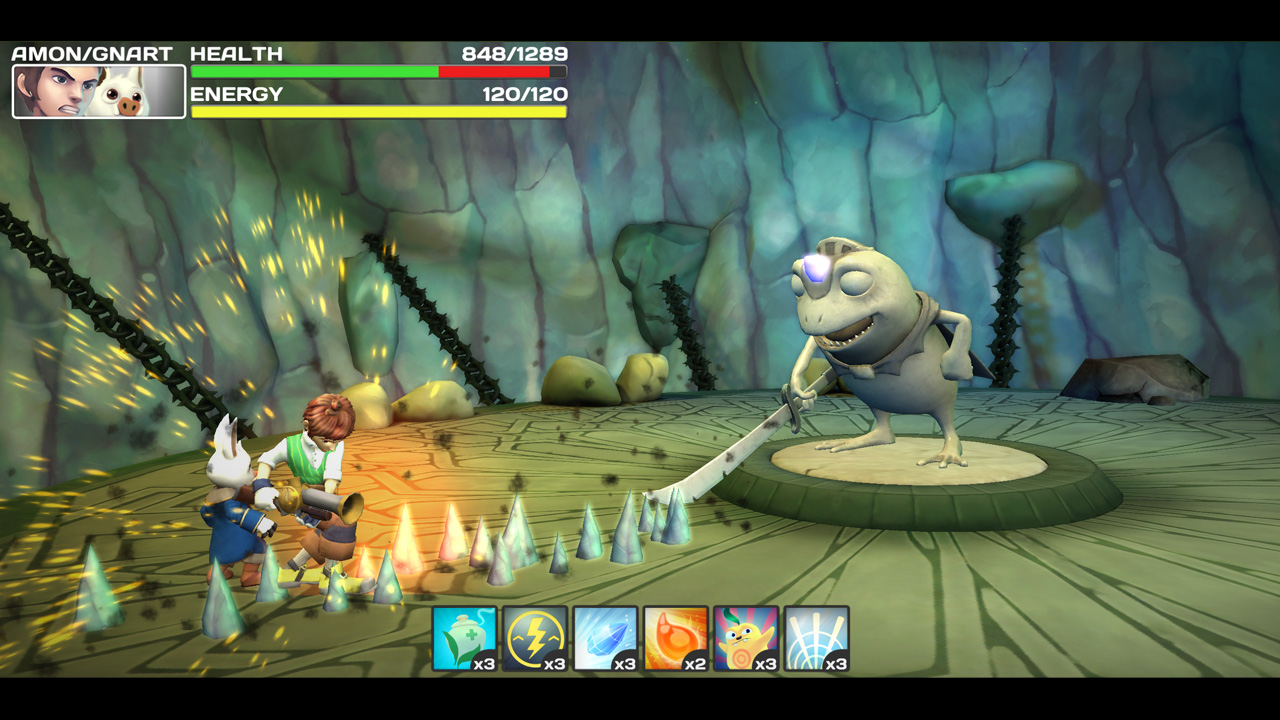 Each round a Combat Pair can perform two actions, one each. Most Actions will use a certain amount of energy. Some actions don't need energy, some do, and some creates energy. Each Combat Pair will have an energy bar, and as they perform actions it will affect this energy bar. How you manage the energy will greatly affect the outcome of the longer battles. The max amount of energy will increase as you level up. We would also like to allow the Protector to über-charge the energy bar unlocking some awesome super powered combo attacks.

We will try to keep each attack animations short and sweet. We want the gameplay to feel fast and flowing - as much as possible for this type of combat.

As the old school JRPG genre matured, combat stress was increased by adding time to the gameplay. Active Time Based Combat was one of those mechanisms that will penalize if you spend too much time thinking about what to do next. We don’t like to punish the player, but we do appreciate the added fun of getting a bit stressed out while playing. So, our approach is to add a timer that if you manage to do your combat action within a specified time-limit, you will get some kind of combat bonus. This might be a XP bonus, or an energy bonus, or maybe a Critical Hit bonus. This speed selection bonus will require fast action from the player.

Thanks! It was supposed to be simplified compared to most other RPG's, but having written this post, it feels rather complex. I should add that you will start the game, with only one Fighter.

Once you are used to the basic non-magical combat, we will give the player a Protector. Later once that is mastered, the player will get a second combat Pair, and so on.

So this is just the "Beast and the Beauty" story ?

As you only have the brute, with brute force, but not magical force, and the beauty, the protector that has all the magic, but can't do anything without the brute.

So there's no way, for the magic lovers, in "Festival of Magic" game, to have a mage warror... one with low physical defences (and such) but able to attack, and have a brute as protector, physical protection :D

Does anyone have a better name for the Protector Class? (Currently the Hogbunny, the Yellow Wolf and the Little old girl) They are not really Mages/Druids...

This game looks really promising. I'm excited to keep an eye on it and see more. But it looks like you guys are already have something great. Keep it up.

Also, an idea for another name for the protector class, Clerics? First thing that came to mind.

@kdooley,
Thanks. I forgot Clerics - As we don't have any defined religion in FoM at the moment, they were off my radar. (If we ever were to have any religions - not saying we will, it will be some ancient ones. In that sense Shaman might be more suitable than Clerics I guess?)

Still, the Protectors are in effect a mix of Bards, Clerics, Shamans, Druids and Mages - all 'magical' classes in various ways. Our Protectors will also have the power to conjure/summon creatures.

What the Protectors all have in common is that they affect the combat indirectly through the Fighter.

This looks really awesome. But as I was reading, the term "protectors" did confuse me a bit - I agree they need a better name! Something that clarifies that they are magical and work as a kind of "support" unit, not a front lines unit. But the combat system looks really nice and sleek. Definitely simplified from classic RPG style. I really like the idea of pairs and combat bonuses, and time bonuses. Now my question is: do you have any plans for multiplayer? The pairing system seems like it would lend itself very well to it...

yes this is epic :D

Thanks RedOwl and Fully-Metal, we spent some time today discussing alternative names for the Protector Class. We did not find any new name, but at least the Protector is defined as a Magic-Companion Class. Where Magic is used in broad term.

As for Multiplayer. We are designing micro servers where 4-10 people can play together (Close Friends) But the multiplayer gameplay will be limited to the harvesting/crafting area. (Have your girlfriend harvest all your ammo and spells while you go out an save the world.)

We will also introduce a Combat Arena for Combat Tournaments that we hope can be open for multiplayer. I say hope, because we are not sure we are able to make turn based combat play well as a multiplayer experience.

The narrative driven gameplay (all the quest) is designed as a single player experience. After all, you are supposed to save the world and be the hero. But once we get this game out in the hands of players, we might learn a thing or two...

As it stands now, this is what we are aiming for.

Everything is looking so good , me wanty.
If you are still looking for alternatives to the protector name , how about Sentinel or Custodian?