Dear community, today we have a really special video for you, a new picture and new community integration.

Dear community, today we have a really special video for you, a new picture and
new community integration.

Patrick aka Pat21, our Lead Programmer almost finished programming a completly
dynamical airstrike, which allows you (the player) to order an airstrike where
ever you want. Furthermore he integrated the whole code in a single flow
node, where you can define particle effects, number of bombs and alot more.
Of course, in the following development time, we will spend more time on
this feature, to make the airstrike even better.For exmaple a new "Weapon"
to define the target + new sounds giving the player feedback that the
headquarter received the order.

Our prop modeler Marco aka seth worked really hard the last weeks to feed our leveldesigners with great buildings and props. Showing in the 2 images included in this update, you can see a big urban map, however this level is just for mood testing and for showcasing new modeles to the team. We found that it's a great way to keep the team motivated and that it's a cool present for our fans! 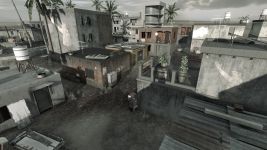 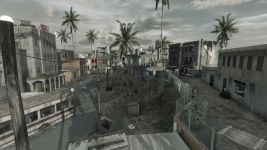 Last but not least, we want to introduce you to our new Codename Deadbird community portals: Twitter, Youtube Channel and Steam group! We thought, like many other mods and games that such profiles would be great to integrate the community more. Beneath moddb.com it's a good way to get involved with us! We'd like to thank "Overgrowth", where we got the icons from.

That's all for today's media update. Please help us making codename deadbird spreading into many other gaming communities and vote for us! We need every vote we can get to become one of the Moddbs greatest mods in MOTY!

All the best
- Dark Dust Studio

Already voted for you guys. You're definitly doing an awesome job. Reminds me of Modern Warfare just with CryEngine2 and that's amazing. Please keep it up, i am totally looking forward to play your mod.

Nice job. However, I'd say that the explosion particle effects are a little too firebally. More smoke and less fire would make it look more realistic in my opinion. Excellent job anyhow. Keep it up!

That video just made me vote! Nice job so far... I am quite impressed!

Absolutely can't wait to play this mod! Looks great so far! I'm gonna have to agree with PringleX though that the explosions need a little more smoke and less fire, but they are still VERY impressive anyway. Also the way you hold the weapon looks a little odd, but enough complaining, mod looks great and I can't wait for it to be released, keep up the good work guys!