Cinematic Physics, Fire, and a contest with incredible prizes!


For the past year, we've followed a monthly update routine, giving us constant improvement over our produced content for a better final product. In every update, we've asked you for your criticism on everything from particles to map scenes and models. That feedback has not only allowed us to iteratively design our content based on fast feedback, but even accomplish better performance on some high-end effects.

This time, we want to give you a chance to get something back for your constructive suggestions while also giving you a chance to have your creations directly implemented into the mod. We want you to suggest your own original ideas that you'd like to see put in the mod! Perhaps a scene that you'd really like to see in-game? Maybe a new engine improvement on top of some of our current changes? How about just a plain awesome blow-everything-up-around-the-player gameplay scenario? Whatever you have in mind, we want your ideas!

Not only will some of the best suggestions and ideas go in-game, but one lucky winner will get to play City 17 with some special cool secret stuff! The top 3 will also win some awesome looking C17 mousepads! More details posted below!


What kind of suggestions are we looking for?

The best 3 suggestions gets their ideas in-game, and free mousepads (One of only 20 in existence!), with their choice of background scene! The number 1 suggestion will also get early access to City17 before it releases!

Even if you do not win, theres a chance your suggestion might still make it into our mod!

To enter your suggestions, send an email to:
gear.dev@gmail.com
Please keep in mind, your suggestions can be about anything! Gameplay, story, characters, features; anything you can think of! There's no limit to the amount of suggestions you can send, and you're allowed to include pictures, videos, or any other form of media with your suggestion.


To add a more professional and cinematographic look, we decided to use Cinematic Physics, a method of physics-based baked animations, which Valve uses for games like Half Life 2 Episode 2, Team Fortress 2, and the entire Left 4 Dead series.

Cinematic physics have many advantages. Because they are baked animations via a 3D Modelling package, physics processing is no longer handled by the CPU! Using this approach to physics, we can now make maps littered with much more complex destruction scenes, without using precious CPU cycles and increasing your CPU usage. This means we can make beautiful complex scenes without putting any strain on your poor CPU! 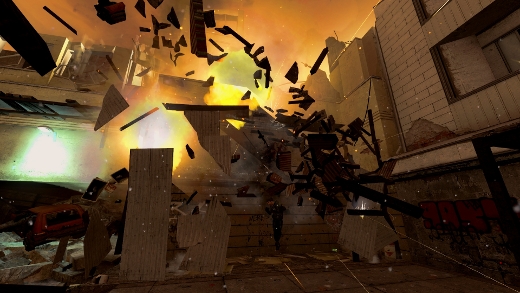 You can view the results of Cinematic Physics driven animations first hand in our video below:


Our last update got us working on some new environmental effects, and with that we've created a slue of new fire effects. From the last update's feedback, we've thrown together some new fire particle based effects. Not only do they use less video memory and CPU cycles when compared to our last version, but look twice as good! 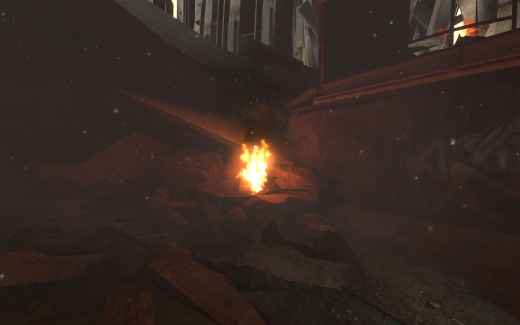 Some of those effects can be detailed in the scenes below: 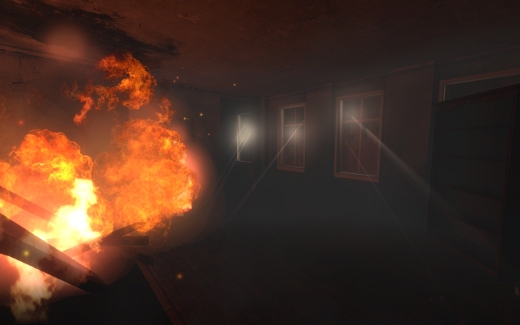 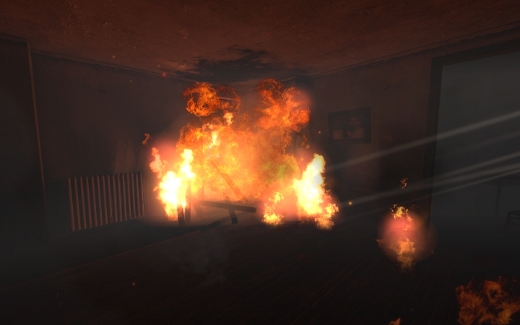 That's it for today's update! But we'll have another update this month for parts 2 and 3 of our contest, so check back often! Have a Happy New Year everyone!

I noticed most of your comments are 3 word sentences.

The funny thing is that this is true

What ? Are you serious about this wasting a lot of money to do this contest but just like it say Valve were not presenting your work because all that does is about money without it they were bankrupt just like in GRIN.

I think I'll give this suggestion thing a go :)

After many years of playing Half-life 2, I still like rampaging through a random mod, gunning down everyone in a mindless rage. But it doesn't hurt to try and be a little bit more defensive then offensive.

Throughout these mods I play, I come across assorted cars and trucks. Pushed to the sidelines after many years of misuse and lack of fuel, only to serve as a roadblock or cover from enemy fire. They rarely come into play in mods, usually as a smushing device for zombies and the only instance I've seen them actually driven was in the mod "Eye of the Storm". What am I getting at? Well...

Heres a scenario. Your entryway into a new area is blocked by debris, and the only way to get through quickly is to smash your way through. Thankfully, there is a truck nearby with rebels behind the wheel, who have rigged the truck with a bulldozer plate, ready to plow through the debris. But the problem is, their open to enemy fire and they didn't have much time to rig up too much armor. So, as the truck continues to plow through the road debris, you must draw the fire of the Combine to you, rather then the truck, by creating a scene and a hell of a lot of noise. Thankfully, there is plenty of cover, plenty of meaty Combine and plenty of things to smash and blow up in this street and adjoining buildings (Barrels, lights, electronics, even the walls with enough force) to bring the realization to the Combine that you are a much greater threat then the men in the truck, before they plow/push through all the debris, letting you get past.

I like that, sounds interesting, and gives some good gameplay.

I like it, too. That's definitely a new scenario :) Best of luck to you, mate. *emails submission*

A three day update? This sounds familiar...
Not that I mind or anything, I just think it's funny!
I'll come back one day with a character idea.

I love what you guys do, great update each time.

Good work but the cinematic physics kinda suck because it's really linear because you get the same results every time which makes it kinda pointless unless you have a big explosion or something but in gameplay it doesn't really do a great deal.

Left 4 Dead and Team Fortress 2 does it. I think it looks amazing. You can do more "cinematic" explosions with this method than you could simulating it in real time.

Great particles. On the first screen it's look like a real fire.

PS: Do you planing release demo after some time ?

I have an idea for a part of the game. I thought that a concentration camp may add to a dramatic story line. Think a bit of Treblinka. An extermination and work camp. After Nova Prospekt being out of action they move everything to there. All the captured rebels and threats are put there and are about to have a horrible disease spread through it (Maybe something like Anthrax). And instead of being a Mr. freeman with guns blazing and blowing up the entire facility, you smuggle people out. I just had another idea which will affect my last one. A respect system, a bit like the one on Red Faction: Guerilla. The more Rebels you smuggle out the more people will look up to you. The same goes for flippedoutkyrii's idea. The less rebels killed in the truck the more respect you get. And if you have more respect you can take more people in a squad or something. Or they will give you more health packs and maybe even give up their weapons. Or sacrifice their lives for the main protagonist. I may come up with a Character later but I can't think of one now. Hope you like my idea!

but just don't let yourself get catched by combine hitler! ;)

The explosion is pretty, but after a big blast like that I'm sure the building behind the scaffolds would be somewhat damaged. A big gaping hole where the Strider laser thing (I've forgotten what it's called) hit the wall would be sexy.

This. You'd expect it to knock a few holes in the wall too, especially seeing as that's what the strider cannon hits.

Cool look those realistic physics ;) i love this mod cant wait the release

Also, don't make the animation break the entire model. With the intact wall, it looks unrealistic. Make so that only a part of the model breaks away.

We go for coolness over some realistic factors.