ModDB has turned 10 years old, so it's time to hold our chins in thought and look back.

It's hard to believe that ModDB is 10 years old, after launching way back in June 2002 when Altavista was still the no.1 search engine, Google was just an up-and-comer and Twitter / Facebook didn't even exist. ModDB was first created because while attending various lan parties in the Counter-Strike heyday, my friends and I wanted to try and play heaps of different mods. Finding them was impossible, so creating a database of mods was our solution and hence ModDB.com was born.

Since then we've survived all manner of doomsday scenarios, such as the 2006 "PC gaming is dying" catastrophe "closed-off non-modding friendly consoles" are taking over. We've survived the great DLC avalanche of 2010 when previously mod-strong games like Call of Duty and Diablo announced you'll have to buy updates from them. Despite this modding is as strong as it has ever been, because people love tweaking and changing their favorite games and modders continue to innovate with timeless classics such as Counter-Strike, DOTA and more recently DayZ evidence of this (check out our Hall of Fame for some of our favorites).

To celebrate we've created a wallpaper with some of the more famous (and obsecure) characters from mods over the years, see if you can identify them all: 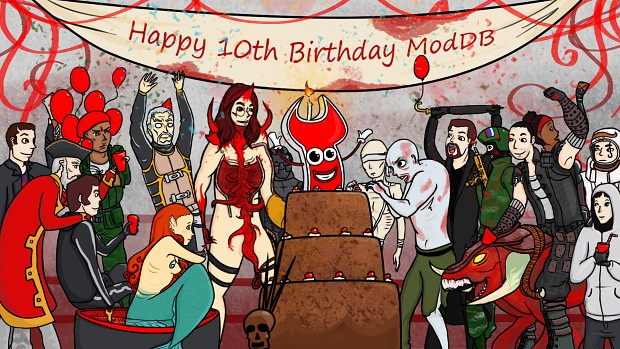 Now for some random facts:

If you are looking for a detailed and colourful look at the very beginning of ModDB, how we came to be the site we are, we have written a detailed retrospective for the diehard fans here:

A 10 year history of ModDB

So to everyone who has ever made or played a mod THANK YOU. It's been an amazing journey and we're looking forward to another 10 years!

Hear, hear! What a great decade that was, eh?

Impossible because at first day of 2013 crab people will eliminate whole mankind.

Damn, not again! Errr I mean, what you don't say, didn't see that one comming. :)

Someone make a mod with this context. Preferably on the source Engine.

We have boiling water? Think about lobsters.

Happy birthday!!!!!
the best page in the world ;D

Fantastic! Over the 10 years you build a fantastic side, lets go for the next 10 years!

Happy birthday! I had no idea that I joined up so close to ModDB's launch. So hard to believe it's been a decade already!

10 years, eh? it always makes me feel sort of old when I realise I've been visting here for 9 years.

Congratulations, ModDB. Nice show on the part of the staff to keep it going all these years.

You people are awesome. Best of luck for the future (and beyond!) :D

And I'm STILL waiting for that talk. I mean I am willing to work for you but you've got me to half way...

10 years old eh? Well a toast to reaching that milestone and may Moddb continue to grow as the years progress.

And another toast to Moddb itself which is one of greatest modding sites on the web (perhaps even the best. I know of no other rivals).

Death threats? You gotta be kidding me... Only on the internet.

we've received all kinds of crazy emails and posted mail even

All of them are probably from me.

I want my money! You stole my idea!

The death threats would have to be pretty random. Why would anyone send a death threat concerning Moddb?

This site really is FANTASTIC.

It's a whole universe of splendid potential, and an enormous billboard screaming out to the rest of the insane world, "Hey! People will work their @$$e$ off for free because they love what they're doing so much, they want to share it with anyone in the world whose willing to partake of it!"

Well, that statement isn't probably fair to the "whole" world, as its insanity is due to the corrupt machinations of about 10,000 elites who rule/ruin so many positive things about it. But we all already knew about that through Deus Ex, didn't we?

What a testament toward human creativity!

Thank you for all of your hard work and devotion.

This is a tremendous community. Happy Birthday, and MANY more to come!

Happy birthday ModDB. Was surprised to learn that the Stanley Parable caused you busiest day. Knew it was big, but not that big.

It's been a hell of a decade and in that time I've seen so many modding and gaming sites die off. I still lament all the lost content when Gamespy's Planet sites stopped hosting (and now appear to be largely dead).

I'm really really glad ModDB is still around and going stronger than ever. Great job everyone :)

Who in their right mind would send a death threat to the ModDB staff ??? That person can go **** himself ╭∩╮（︶︿︶）╭∩╮. Anyway, happy bday i wish you all the best and lets celebrate again in another 10 years :)

Happy Birthday Moddb! I cant wait to be here for the 20 year anniversary ;) Continue to be the best goddamn website on the internet :P

Gentlemen it has been an honor! Happy birthday!

happy birthday moddb! i hope you will last atleast another 10 years :)

*confetti* Happy B-Day! Great to be part of the community!

Happy b-day moddb ! Thanks for still being here after such a long time !

Happy Birthday! We love you! :)

On another note, I really do like that wallpaper.