The business simulation game Cars Incorporated has received a minor update taking it from version 0.25 to 0.26. Included are new office graphics and a quicker way to get to the factory screens.

Since I require a first few 3D models that are not generated by Cars Incorporated for the future version 0.30 (e.g. attached parts such as mirrors) I spent some time getting reacquainted with the open source 3D-software Blender. A byproduct of that is a slightly improved version of the office. It is still a relatively simple placeholder but it also represents a step into the direction the game is going to take later - with the media update v0.60 to be precise.

Since there is not much going on at the Indiegogo-campaign it might be a while until the game reaches version 0.60. But it will get there eventually, after all I already owe that to more than 60 people already. If YOU want things to move faster it would be best if you supported the game's Indiegogo-campaign, either by contributing or by helping to spread the word. If you do spread the word by using the tools supplied on the campaign page you can also win prices in the ongoing referral contest, amongst other things copies of the game (both digital and on CD), T-Shirts, Access to development builds BETWEEN alpha releases and - if the campaign reaches its goal - also cash prices. Just take a look ;-)

Since I did not want to let everybody wait until version 0.30 I decided to release the new office as a mini update since it also works fine with the current version. This however will definitely be the last update prior to v0.30. Have fun :-)

Why don't you join the discussions in the forum, after you have tried the latest version? 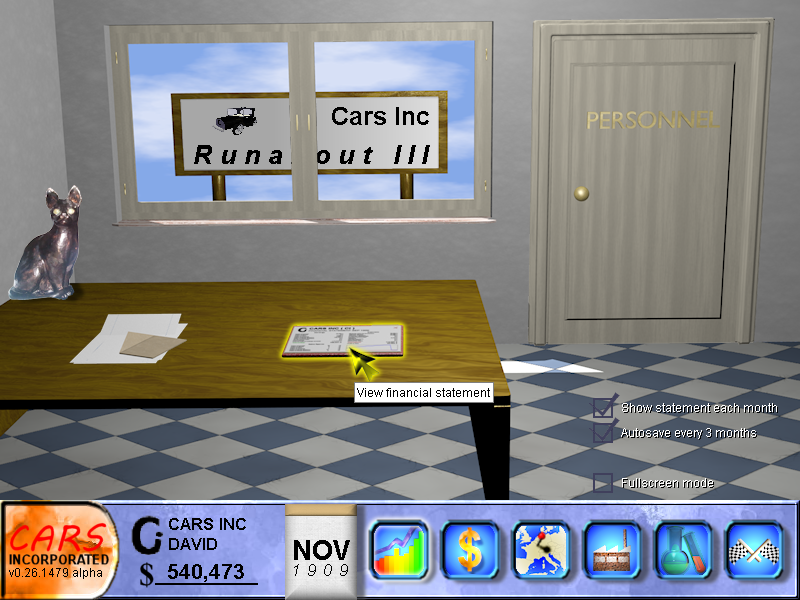 A placeholder sent into retirement. While still being simple, merely a 3D-rendered remake of the old version, the new office does look much better than the old Paint Shop placeholder graphic. The final version of the office will become available in the future media update version 0.60 which will improve the look of the entire game.

A technical side effect of migrating the office to the new graphics is the fact that you can now close menues in the office by clicking outside of them - the same way it was already possible to close menus on the business and factory screens before.

The question "how do I build a car?" or "how do I sell my cars?" has consistently been coming up in the course of time. Just recently I realized that this could partially be due to the fact that the factory screen could easily be overlooked by new players just trying the game.

So I added a new button to the menu bar, leading directly to the factory screen. The old method is of course also still valid. ;-)

Entries marked with (*) were solved with hotfixes available in the forum in advance. Report new errors or download the latest hotfix.

The new version is already available for download. Older versions will offer an update automatically if your firewall is configured to let it access the internet.

Note: Because of internal changes savegames from versions 0.11 and below will not work properly. Please do not load them. Savegames from Version 0.2x should not cause any problems.