A spotlight on carrier warfare in Aero Empire and details on the operation of gyrofighters. A related playable demo is also planned.

On the concept side of things, I've been working extensively on carriers.
Carriers are pretty much the focal point of the Pilot stage of the game, during which the player flies a gyrofighter and attempts to bomb enemy targets or defend his fleet from any enemy bombers.

(Render of a gyrofighter with completed texture)

A gyrofighter is a small craft, similar to a WWI biplane or the Wright Flyer. It's very nimble and can fly circles around the fastest airships, but lacks the range that would allow it to be used strategically. The carriers then are the aeries of the fleet, housing, repairing, refueling, and rearming gyros for use in remote battles. 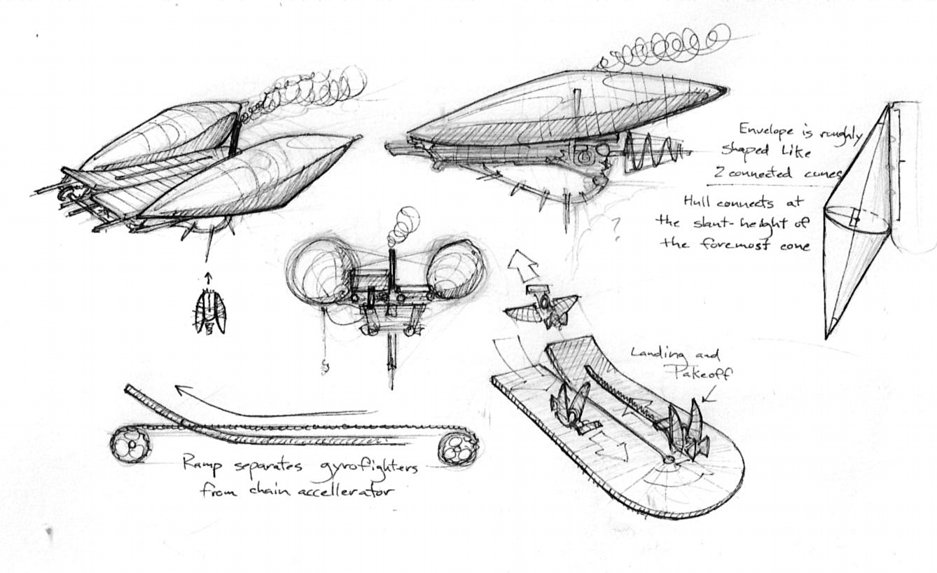 A typical carrier consists of a semicircular flight deck supported by helium envelopes, as well as cargo sections for the crew and provisions and any defensive weapons emplacements. Gyros land on the carrier's port runway, braking by catching a line just like on modern aircraft carriers. To take off, the gyro is placed on a chain/sprocket catapult linked to the ship's engine. The chain accelerates the fighter down the starboard runway and off a ramp. 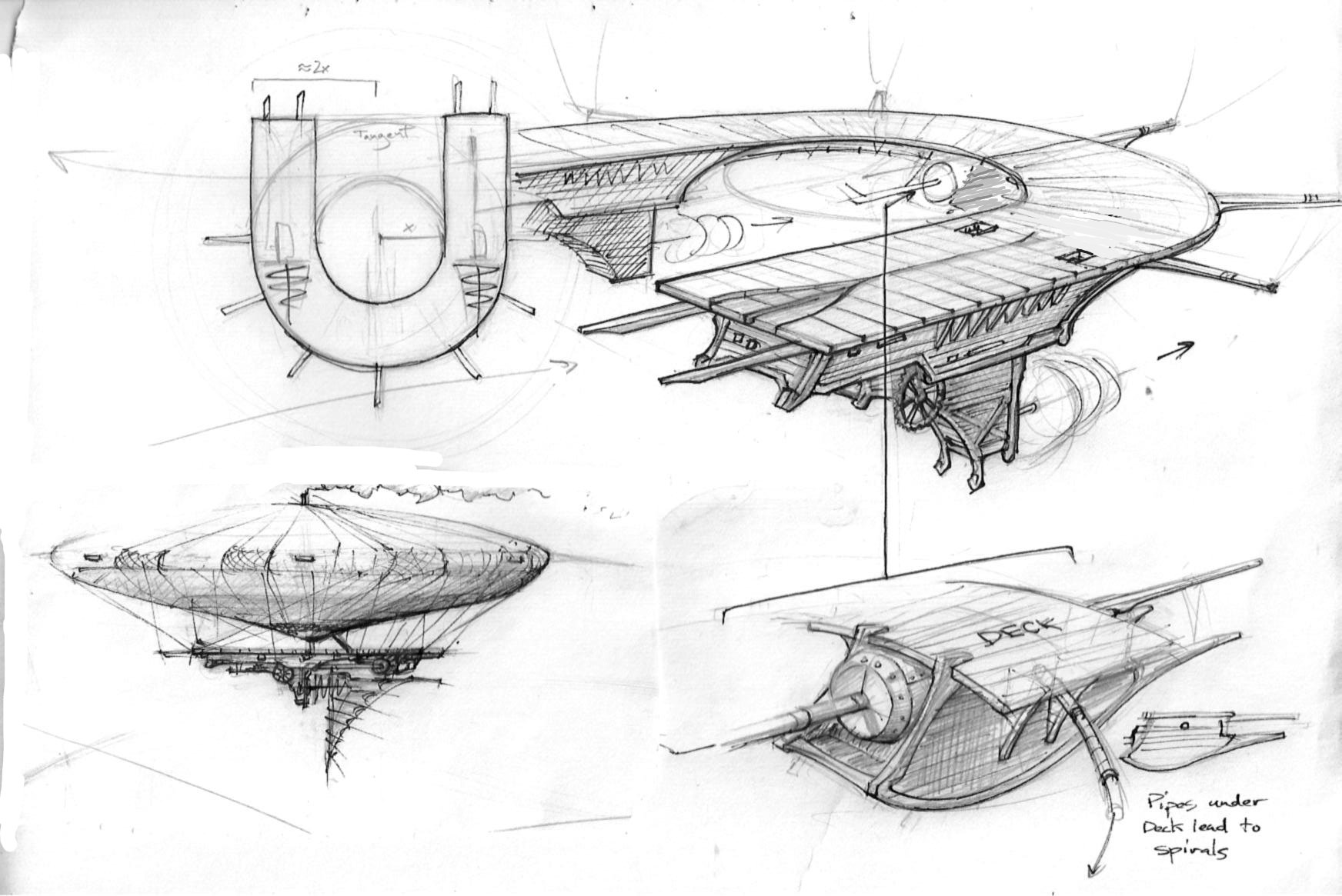 To conserve space onboard the carrier, gyro wings are rigged to fold vertically upon landing and extend on takeoff.

(Diagram of a bomb chute)

The gyro-fighter's primary weapon is a semi-automatic rocket pod in the nose. The rockets resemble elongated .50 caliber bullets and can be fired off very quickly. They aren't potent against armored airships, but can punch straight through other gyros. Gyro-bombers are modified fighters with slightly larger wings and two bomb racks in place of the fighter's rocket pod. Bombers are very deadly against airships as they are able to deliver explosives precisely, as opposed to artillery ships whose ordinance is much more random. 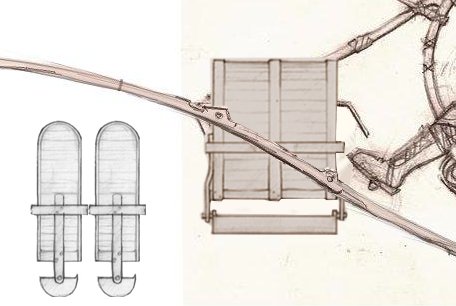 (Arrangement of bomb chutes on the gyro-bomber)

Also, I'm happy to say that the team has recently begun focusing on completing a playable demo of a simple version of the game's pilot stage. All areas pertaining to fighter combat (flight mechanics, HUDs, weapon effects, etc.) are now the direct focus of their respective developers. More info on this will be available when this milestone is nearer to completion.

That's all for today's update. Be looking forward to further updates in the near future.

awesome... I'm gonna expend a lot of time in that seat when the game comes out...
just a question/idea, would be able to still fly fighters if you already passed the rank of a pilot? or renouncing to a job in order to take an other one?

Yes, you do not have to accept promotions, and if you do, you can still request a position as a pilot on another ship even though you have proceeded to the captain stage.

nice... this should fun... too bad it can't be turned into an mmo... that should be interesting

Who says it can't ;) ? We'll start with single player, but we have plans for multiplayer, and even sketches for how the game could work in an MMO setting (although several of the game mechanics would have to be rethought and changed for them to work in a persistent world, the general concept itself extends nicely to multiplayer and mmo games).

I will LOVE this game!!!

I think a lot of people have been waiting for a demo - and so we're finally pushing towards making one (with the completion of the game logic engine, we are not that far from making one). We're thinking of maybe releasing the demo by Christmas this year, but we haven't set a deadline yet.

As for the game itself, the single player initial release will be completely free. After that, we may add expansions to the game (including multiplayer functionality), which we would charge for.

Interesting update. You are promising, and its worth waiting.

These show a real eye for detail and a great kind of stylized realism. Keep it up!

What is the AI for gyros going to be like? i.e., team play focused?

Will gyro to gyro combat be included?
Because I think it will be really hard to shoot down flying gyros with semiautomatic and unguided rockets.

oh and if we get shot down in a gyro will the character die? or will there be the safety balloons larger ships have? (i think I read about them somewhere I may be confusing with something else)