I call it an interview, but it's really him talking non-stop for half an hour about iD Tech 5, Enemy Territory, Rage, Doom 4, and, from 1:26 in the third video, why he thinks that the golden age of modding has already passed by:

And while you're here, don't miss the four new Rage screenshots from SIGGRAPH 2009: 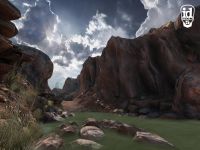 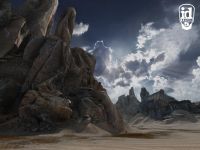 Youtube picked the best still frames for those videos.

Try playing them all at the same time. :P

Shame this was archived. There's a really good discussion of Carmack's modding comments going on at Rockpapershotgun.com right now.

I think John Carmack is great! After reading Masters of Doom I have a great respect for the guy (and every other founder of ID software). Thanks a lot for posting this very insightful interview.

God Carmack is the ******* god of game creation. This engine, and it's open Sourceness will be the answer to so many developers dreams.

Who the hell needs chuck norris? John Carmack only took one vacation ever and in that one vacation he wrote a mobile game engine. (True ******* story, the guy is a ******* genius) He is the reason you ALL have graphics cards that do what they do. He originally pushed hardware developers to create hardware to hardware accelerate games past the CPU. THANK THIS MAN.

NO DONT GIVE HIM A BJ YOU'D MAKE HIM GAY

you give him a bj blacowicz

Thanks for the news!

Well really, there was two golden ages of modding: 1994-1997 and 2000-2002. All the other years feel meh, because almost every (the majority has a ton that don't quite make it) leader's lazy and over-ambitious and not thinking realistic enough.

swappable engine? some one should give this man an old and moldy cookie, he finally arrived at the multitier concept in programming >_>
btw, hasnt that already been done in the ps2 and xbox to 360 period, or with the wii versions?

He's not trying to hawk it as a new idea, you know.

After selling out to Zenimax I have no respect for the man anymore.

Modding really has passed us by because the more shiny and corporate the industry becomes, the less people want to try the basic stuff and the more they want to try and compete with AAA games..

The result is failure.. always- the other problem is that a lot of gamers don't want to give non-AAA mainstream games a chance.

I think though Indies are taking off where Modding has died down- this could be a good thing.. the fact is though that Carmack needs to keep supporting Modding else no one will use his engine.. no matter how pretty it looks. Everyone that mods the engine after all is a potential customer for a commercial license.

That was rather interesting. Now where to I get me some of the CD-Action diet coke.

jesus this dude, I could listen to him for hours. I bet he must be fascinating to work with!

I don't know what kind of **** about mods he actually talked about but probably mods aint that good no more because half of these "professional" ******** that are way to overpaid to do their job steal ideas from the mod scene actually and sell them as their own...

Give moders money and time to develope their product and hey.. we got something "professional".

Seriously i simply Lol'd there.

I had to vote your Karma down. You may have had a good point to express but you expressed it terribly. =\ Lost in translation...

I was too ADD to listen to this all, but please tell me this doesn't mean that ID is dropping their great tradition of supporting modders!

Carmack you are my GOD!!!