Talking about animating the main character, Bob, and the work that goes into it.

It's time for another update! This time we have our game's main character under the magnifying glass.
As you might've seen from the screenshots, Bob is a gruff-looking fellow. As his animator, my task is to bring him to life and make him look as badass as a solitary lumberjack should.

Now, you might think that animating is a simple task, just draw pictures one after another, but it's a lot more than that. The pictures will have to sync with each other to make the animation look smooth and reasonable. I'll give you a little tour on how the process in Bob's case took place.

Let's start with the base concept; Bob is an american guy who lives in a cottage somewhere deep in Finland's forests. Being the secluded man he is, his appearance isn't the top priority in Bob's life. During our brainstorming sessions, a hobo-like look was agreed on, and this is what came out of my pen as Bob's concept.

A handsome guy, isn't he? ;) This was accepted as his final looks, so no edits were necessary. The animation process could begin.

Next up was putting Bob into the game's isometric perspective. 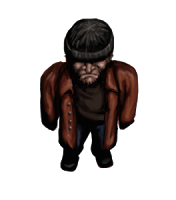 Looking a lot more fitting for the game now. A single standing-down image won't do, though. Now, as with most of the game's graphics, Bob is also drawn by hand. No 3D modeling or similar software, just my trusty pen display and Photoshop. It didn't take me long to get from sketch to finished picture, about an hour or hour-and-a-half. The biggest process was drawing the other pictures needed for his animations, which was basically a bigger whole of smaller tasks. I took the frame-by-frame approach, meaning the animations consist of separate pictures shown in quick succession, and drew the frames for each step separately. The final walking cycle, for example, consists of a total of 5-6 frames. It's not the smoothest looking thing there is, but we're not going for hyper-realistic looks in any case. ;)

After a handful of hours (I didn't really take time, but I think it was around a total of 3-4 hours), I finished Bob's very first walk cycle! Huzzah!

I couldn't have him walking down only, so naturally I had to make walking animations in other directions, too. We went for a total of eight separate directions (down, down-right, right, upright, up, up-left, left, down-left), so I had my work cut out for me.

Fast-forward a few days, and Bob was able to walk in all eight directions!

That was only a part of the work, though. Since our main dude is going to be standing, fighting and doing all other kinds of stuff in the game, my work didn't end there. I still have a good deal of stuff to do, but that will be a story for another time.

See y'all next time!