Finally an update! After spending a few weeks changing Boxycraft 2's physics engine to Farseer Physics, I am finally finished! While I was at it, I also got rid of the ugly Windows UI and replaced it with my own custom one, have a look below: 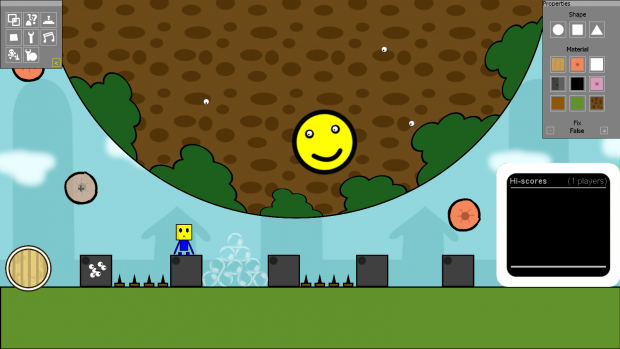 It's still what I'd call a prototype UI, and I've yet to add skinning support to it, but it works pretty well and integrates nicely with the editor. I'm working on the skinning at the moment, and my plan is to make it easily skinned using an XML document and a spritesheet, along similar lines to CEGUI and the Nuclex Framework.

Making the UI nice and moddable will allow people to create custom interfaces for tools or weapons they have made using Lua, and open up a lot more modding possibilities. 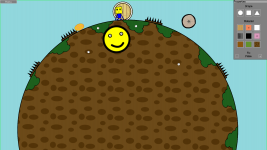 It'll take me a while to implement them all however, but in the screenshot above you can see a giant ball that would never have been possible before. I spoke about some of the advantages before in this post.

And finally, before I leave, let me give you a humble reminder that you can PREORDER BOXYCRAFT 2 FOR ONLY $14.99 OMG!! It gives you access to this and all future builds, and it gives me food. Bonus!

DUDE, its little big planet. You have copied loads of it.
Like scoreboard, points, the creature brain, spikes, create mode, check points.
Why are you coping it so much?

It started off as a copy because I wanted to see if I could create something along the same lines, but now with Boxycraft 2 I am working hard on making it into it's own game!

There haven't been many changes for a while because I've been working on the engine, but they should start coming through soon!

No it won't, sorry! :) There is a chance I'll release a demo version of it, though, but that'll only be once the game is complete