In this article I post couple new comparison screenshots and talk about what changes will be in the remake, compared to the original.

I am working on adding more detail to level, and I decided to post a couple of comparison screenshots to the original, kinda like Black Mesa project did with their screenshots. I think it is a good way to show what was in the original, what is right now in the remake and all diffirences and similarities between both. 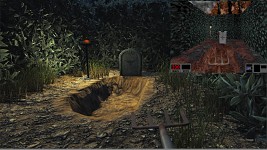 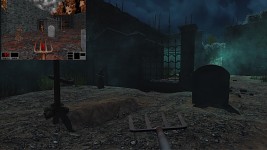 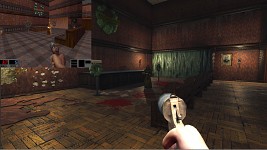 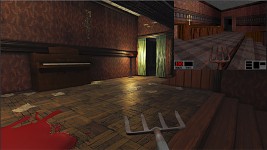 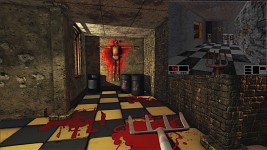 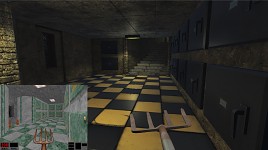 As you can see, I am trying to match general purpose and locations of rooms, but there are diffirences with small details, object placements and layouts. This is sometimes because I feel it makes more sense, or sometimes because of limitations of my resources and budget. I am trying to preserve all important objects at their original palces like secrets, ammo and weapons, enemies or interactive objects.

Changes to the original

I wanted also to talk about changes that will be in the remake. Besides obvious changes like physics, lighting and weapon hitscans working differently, I am also planning to make more intentional changes. For example, one of many innovatons Blood had is secondary fire modes for weapons. They are working great and I will bring this into remake, however for example secondary fire mode for pitchfork in the original was basically the same as primary fire mode, so I dedcided to make it a little more useful. Now pitchfork will have fast light attack as primary mode, and slow and heavy attack for secondary mode. It's nothing groundbreaking, but I think this will positively impact the combat.

There wil also be other small improvements to the game, and I wll talk about them later. Please tell me your thoughts!

Will you eventually Release a Demo, as a Teaser for what's to come? :)

I have plans to release a demo with first level

"Now pitchfork will have fast light attack as primary mode, and slow and heavy attack for secondary mode."

This sounds like something a genius came up with at another forum. Who could he have been??

I really like what your doing and appreciate the hard work but you should be careful before spreading word about it because the developers of Blood i.e Monolith Productions are owned by Warner Bros who have a habit of shutting down fan made mods/games. For e.g the Lotr based Skyrim mod MERP and a mortal kombat HD remake mod.

I hope they won't

Atari owns the rights to Blood, but yeah I think it would've been a good Idea if this Fan Remake was kept Secret until it was fully Finished.

Personally I feel blood is this odd game that doesn't have any mainstream news around it. So, there might be an immunity as long as nobody goes super crazy.

Yeah I guess this should be fine as long as some Game News Website like PC Gamer doesn't find out about it.

...if they do I'll throw them in the grinder from my nightmare with the severed head. Don't know what it looks like. I just know it was big, loud, and a lot of screaming.

big fan of the game this is for you if you want to use it feel free Soundcloud.com

That's really amazing. Thanks for sharing.

You make me wanna hug you.

Very nice. In the words if Caleb "I live, again!'

I would back this Project through paypal. Can we I do it?

It is a possibility, wait for more info closer to release of the demo