Post news RSS Blood and Guts in the Sandbox

Welcome to this week’s Monday blog post! Lemmy here this time, and yes, we have a video! Though probably not one you’d ever expect. As we continue to beat the meta-game into submission, perfect the skill system, expand the map, add all the missing animations, and do numerous fixes to the game to bring it toward RC3, we thought we’d give you a look into a part of the game we have kept under wraps for a while, but one that should have a huge impact on the game.

One thing about the zomboid community is it’s a diverse bunch. Whenever we've released versions in the past, we've had requests to lower the zombie populations. We then lower them and some people wish for higher zombie populations. Some want more weapons, some want less. Some want harder zombies, some want easier ones. Trying to find a balance where everyone or even most people are happy is a massive challenge. Some people may love it when they are hounded by zombies and want every last moment to be manic panic with short action packed survival times, where others may want to be left to build in relative safety. There isn’t a fit-all balance that would please everyone isn’t really possible.

Of course this left us with a bit of a dilemma, because since starting this game we’ve had very specific goals of making Zomboid not only as realistic as possible, but also the core premise of the game is that you are going to die and the game should try to do that at every opportunity.

Particularly with building, farming and numerous other features going into the game, it’s important that the official ‘You survived for’ main game mode should make it extremely difficult to survive for long periods of time, and doing so should be a massive achievement,, and the game should be balanced not only to be realistic and to conform to our borderline obsessive idea of what ‘proper zombies’ should be.

As such we decided to split what was Sandbox into two game modes. Survival being what Sandbox is in current versions, the standard and ‘official’ way to play the game, which is the same as the settings for the Story mode. This is canon Zomboid and balanced in similar ways to 0.1.5d. After dying you will get
the ‘you survived for’ message in the recognizable font.

Sandbox mode however, is now freed up to have additional options, allowing those players looking for different experiences, or with different tastes or skill levels, the option of customizing the gameplay in a multitude of ways. These options are cheap and quick to add, as well as being fully moddable, but potentially open up a multitude of community challenges and varying game styles. These can be added to over time in the future ultimately giving a huge amount of variety to how you can play. This is what a sandbox is all about.

The beauty of this is that we can give people the ability to change the game to fit their personal preferences without compromising the story / survival modes or our original goals about what the game should be. Sandbox’s death message will be in a different, smaller font, post RC3 possibly with additional information about the sandbox settings.Here is the Sandbox options screen (with an annoying typo noticed a millionth of a nano-second after posting): 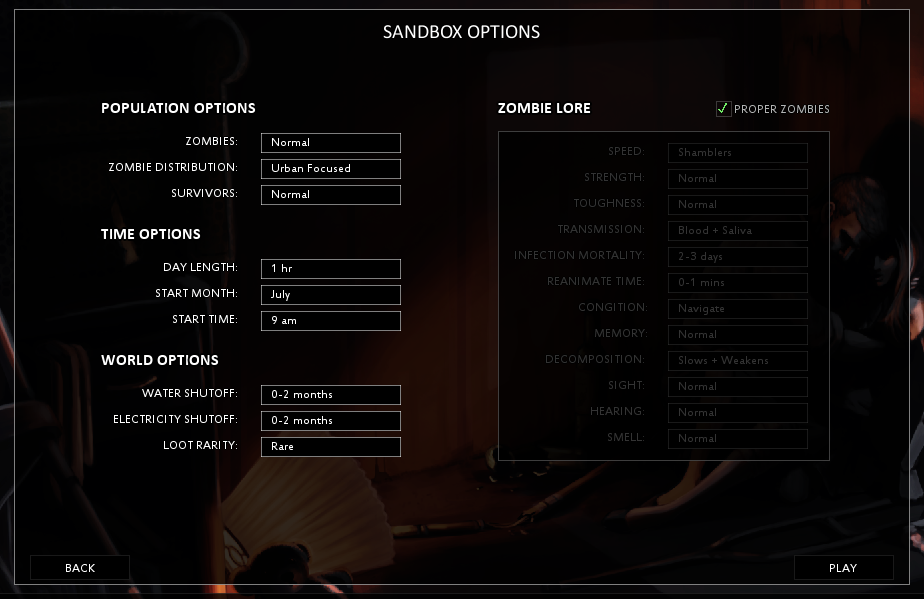 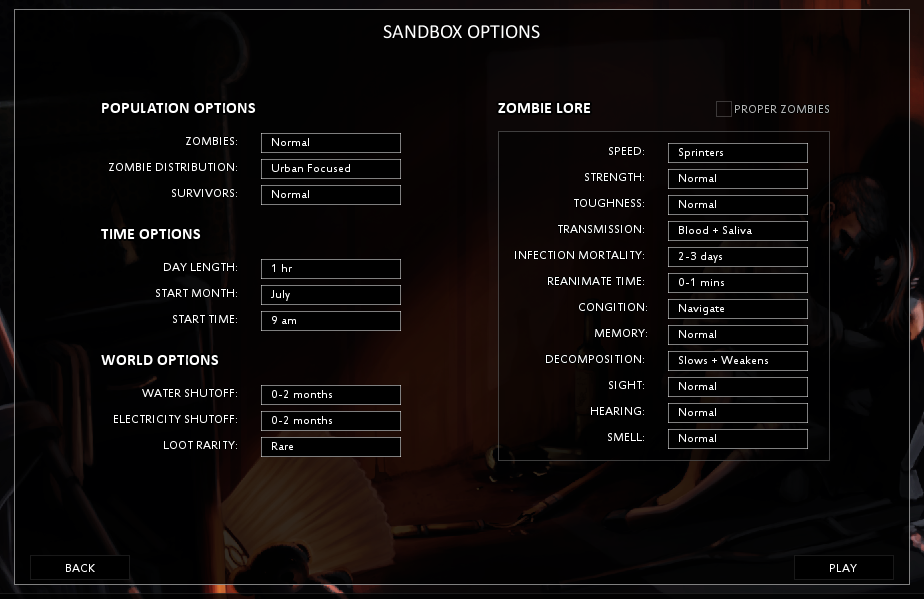 The Sandbox being a truly customizable experience, just with a few drop-down box changes you can change the zombie lore to most popular zombie fiction. Running and instant infection, to ‘everyone’s infected’ shamblers, to non-infectious weak runners, to anywhere in between. Huge amounts of zombies or not many, lots of NPCs or no NPCs, 1 hour days or play the game in complete real-time. The choice is yours. Although some of these options would be something we’d never ever want for the main game, it opens up many more options for players if they want a different experience depending on their mood or tastes in zombies and gameplay.

We can imagine forum / youtube challenges for survival times with 'Insane' numbers of 'Sprinting', 'Superhuman', 'Bloodhound' zombies as the results are frightening and entertaining to behold:

Thanks everyone for their continued patience and we'll get you RC3 as soon as we can!
Love,IndieStone

good compromis, if you want it, customize it..

each monday just makes me want RC3 more and more

Trying few but fast, strong zombies will be a different and very intense experience.

hehe... this should be the new 'lynx' advert!

I know you guys are working hard and all but these forms are just rubbing salt in a deep fatail wound your pretty much going *Hay look at this game we can play but you guys can't and have to wait ages for it* fair enough it games don't happen over night and need lots of work but come on, seriously we've been waiting I can't even remember possably since summer 2012 how long is it gonna take I'm losing hope and I might just open the window and jump from this 5th floor room, not real life I meant in game not gonna kill myself over a game but in all seriousness please could you at least give us something to test?

the jamiboi is right this is torture ive been waiting for so long for this to actually come out and it is a pain to wait at least come out with an update for people.

By the way, if we choose to have a high amount of survivors and few zombies, will the zombies eventually take over via infection etc. if we make them powerful enough?

i agree its taking to long for a update! so think howlong its going to be to finish, i dont think this game is going to do a well as it could of, they made the wait to long and dayz standalone is nearly finished so i am going to enjoy real zombie survival simulater rather this glicthy never coming out game

What are you talking about? DayZ works in a COMPLETELY different way than Project Zomboid does!

Great! Different Zombie Apocalypse everytime i play! Best zombie game ever ;_;
I hope that coop will be soon (at least for few friends). Surviving zombie apocalypse with best friends is best thing ever!

Turn them into beasts by turning up speed and strength but turn off their smell and hearing... All of a sudden, the sun becomes your worst enemy!

Sandbox mode better have a **** ton of options and they better be easy to understand. THE More Options to play with, The better the game

This is going to be awesome! But i noticed a reanimate option in the settings, does that mean after you kill zed they get back up in set time?

I also saw how they take bites out of you, sometime in the future can you add the horde like eating at your characters body when the, "This is how long you survived" title comes up? Its not much but its better than them standing doing biting animations when your on the ground.

Ah This is amazing! you can make where the zombies are most concentrated, makes for an easier start :)! Love it!!!!

Thanks guys, I didnt expect to get something as awesome as this. A sandbox option where you can change so much stuff is something I rarely see in games.

Best idea ever! So many options!

you say cheap and quick to load

does this mean we will have to pay for the custom optoins?
what happend to the key of RC3 realese?
Just keep on with these ideas you should finish the work you started before making more that needs to be finished surely, youve drained me

I agree 0, Im at the stage where I believe this is scam they are making an isometric survival game not far cry 4, theyve made enough money off us if they arnt up to the task then hire someone that is

Its hilarious when the only people that are complaining are the ones with the low IQ.

Seriously, I dont even understand what you are talking about.

Look on the forums...

RC2 is out for some long time now.

On behalf of most everyone on a PC...THANK YOU! So few groups realize more customization? Not a bad thing! It's nice to see customization not take a back seat in game design! Thank you!

LOL you people are crazy thanks thanks thanks for what? they havent released it yet and your thanking them yeah thanks for taking my money and leaving me with a busted prototype and no ETA, thats all the thanks youll be getting from me until I see RC3

It will arrive soon, my child. :D

I'm hoping for layered clothing if they're introducting weather elements and being able to be cold or hot. For example, you can have an undershirt for your base, then you can add a sweater or button-up (long or short sleeve, with option to roll up sleeves using crafting tab) then you can add a jacket, gloves, a hat, and then different types of pants and shoes that could add to different skills, such as combat fatigues for a bit of blending in, and steel toed boots for crushing zed skulls. I think it'd be awesome to implement every aspect of customization for the different weather, where in the winter, you could put on a jacket over your shirt, and then take it off in the summer when the weather starts to warm up. Just a feature I'd love to see implemented. :)

Im gonna set the least amount of zombies as possible, but with them being fast as f**k, but they will also have bad senses, so if i slip up, they eat me alive xD

Im going to love this feature.