There won't be a Friday update today, because I bit off more than I could chew.

There won't be a Friday update today, because I bit off more than I could chew.

I think I got started with the coding too late in the day. It's 5 pm now, and I have nothing at all implemented. My first attempt was to do biomes, but that ended up being very slow and very bad (sudden wall of snow for no reason!).
Then I tried doing monster villages, which turned out to be much more complex than I thought. Like seriously a lot more complicated..

The base code I wrote for biomes is definitely usable, but I need to speed it up (easily done), and make it much more intuitive to the player what the current temperature is or so. I could either do a simple postprocessing effect where cold areas have a cool tint (blue), and hot areas have a warm (red) tint, or play around with fog density and color. Or possibly particle effects..

For villages, I need to come up with something clever. It would be great to have small huts with roads and so, but doing that procedurally in streaming terrain is far from trivial, heh.

Also, I had 120 important emails to reply to when I got back from Berlin, so naturally I did the mature thing and ignored it for two days. Today it was up to 150, and I chewed my way through 75 of them, doing the oldest ones first.

If you're waiting for a reply to a payment issue email, I will get to you this weekend!

C418 just released a new album, and it's good.
You can listen to it online, or download it for free by clicking the image below. 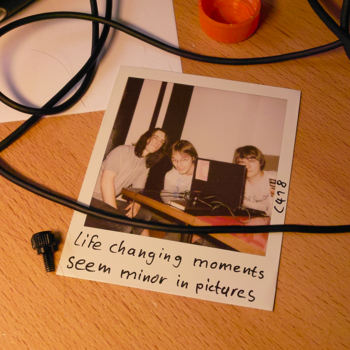 I met him in real life at BIGJam. He was younger than I expected, and the relaxed and almost nonchalant way he made music made me realize he's a real talent.

Keep an eye on him. He will go far.

Biomes sound cool, but is there any benefit to them? Considering you have until next Friday to do it, you could introduce a more in depth farming mechanic perhaps where only certain plants grow in certain temperatures.