Fleet ships have been completely re-designed to create a much better action and strategy experience that rewards players who balance their fleet composition instead of loading them with only dreadnaughts.

In Beyond Sol, you will get to purchase many different ships and design a fleet to attack your neighbors. We want fleets to contribute to both the action and strategic gameplay of Beyond Sol. On the strategic side, we want you to think about your fleet’s composition and give you reasons to pick certain ships over others and not let this choice degenerates into a single cookie-cutter composition. On the action side, we want every battle to feel different depending on what ships are used since each ship has different weapons, defenses, and movement behavior. In addition, we want the depth of fleet composition to be something you can easily get into but learn to master over time by designing a fleet that can overcome a particular opponent. 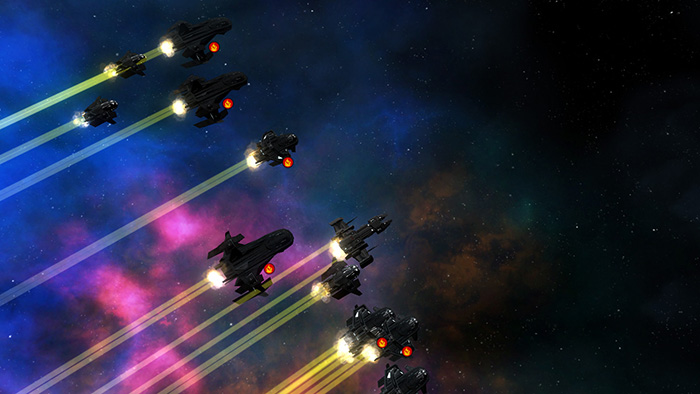 The original design of our ships followed a sized-based classification where bigger ships sacrificed mobility for higher stats and more firepower. This basically meant that dreadnaughts were twice as big and powerful as battleships, battleships were twice as powerful as cruisers, etc. The intent of the design was for players to experiment with different compositions and create fleets of varied classes where a key consideration would be the cost of the ships; however, playtesting revealed that players would eventually always build fleets composed entirely of one kind of ship – the biggest badass at their disposal. It turned out that players didn’t care what it cost; they just wanted a fleet full of the most powerful ship, and the game balance rewarded this strategy since a fleet of dreadnaughts would quickly obliterate any number of other ship sizes. We realized that any sized-based classification would result in a “bigger is better” perception by players so we redesigned all of our ships in a new rock-paper-scissor model described below.

All ships still have shields and hull strength you have to deplete in order to destroy them, but now each ship will have either a lot more shields than hull or a lot more hull than shields, which means each ship is either a shield-based defense or a hull-based defense. To coincide with this change, every weapon in the game now has a huge damage bonus to either shields or hull. Lastly, every ship you can purchase only has a single weapon that can target other vessels, which means that, offensively, every ship is specialized at taking out shields or hull, but not both. 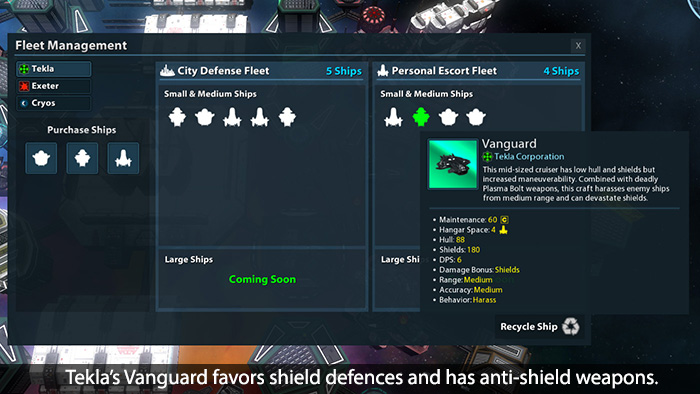 By designing each ship to favor one defense type and also favor one offense type, we get a great system where certain ships are hard counters to others. If someone tries to use only a single kind of ship, it can easily be countered by someone who uses two kinds of ships designed at taking out both defense types. But this new offense/defense model alone isn’t enough to have a deep combat system, so we have a second dimension to the new design described below.

Each ship will now have a specific movement behavior and target priority that will make it fill a specific role in a space battle. The 4 basic behaviors we have so far are skirmisher, stationary, orbiter, and interceptor. Each behavior has a particular movement pattern and each is designed to take out another behavior. This dimension creates a real challenge for players because you can’t just do the math to find some optimal balance to your fleet since behavior patterns will add a lot of unpredictability to battles that you must learn through experience.

Example: A stationary ship doesn’t move and fires high damage volleys directly at their target, so if it is attacked by a ship with an orbiting behavior it will most often miss the target ship with its weapons. The orbiter’s behavior gives it a decisive advantage over the stationary ship but it is vulnerable to the interceptor behavior which is designed to fly directly at its target and is often quite fast. And the interceptor is vulnerable to the stationary because it would fly directly into its flurry of weapons. 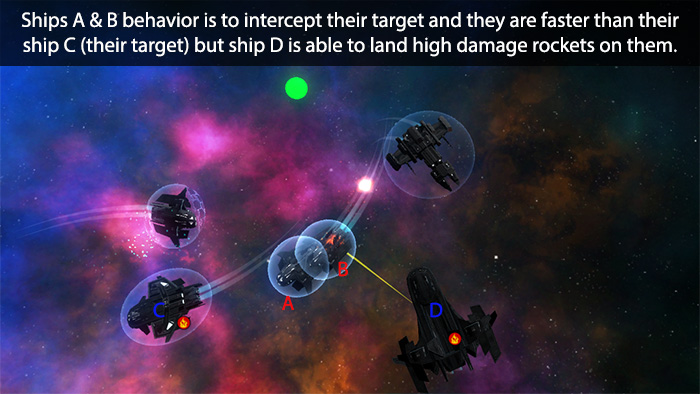 The combination of weapon type and behavior-based counters enhances the strategy component of the game by requiring players to experiment with new fleet compositions to better deal with enemy fleets. This approach will create a great variety in combat encounters due to the constant variations of enemy fleet composition, and your ship knowledge, strategic planning, and tactical awareness will be tested if you hope to win large battles.

But what about those cool Dreadnaughts?

Although we think this new ship design offers a better gameplay experience, it’s clear that players loved building the massive, powerful dreadnaughts in the old design, so we’ve decided we want to keep dreadnaughts in the game in some way. We will disable them for now so we can focus on balancing the new system but we have some ideas on how to bring them back in a new and interesting way.