Nobody enjoys downloading huge files, right? Update 0.3.1b is ready and it's smaller than ever before! Better compression, updated textures and some other fixes - new pack coming next week!

Update 0.3.1b is ready and it's smaller than ever before!

After big changes in RL and working and refining the texture pack on a on-and-off basis there's new (old) stuff coming up. I started to refine and improve the whole project some while back, adressing issues some folks had with the humongous environment textures of the hoth and chandrilla level aswell as fixing things from a visual/aesthetical perspective. Future packs will from now on come in a "Full" Version (with visually lossless compression, mostly half the size the packs had before) and a "Lite" version (with slight visual loss and about one third of the original size). This should improve performance on low speced systems aswell as reduce download times ;) Also I started creating my own texture library with a lot of new interesting real-world textures, some of them are even better replacements for some of the already improved textures from older releases of my mod. Also I decided to implement more refined compression of the textures.

A small sneak-peak for the pack coming next week: 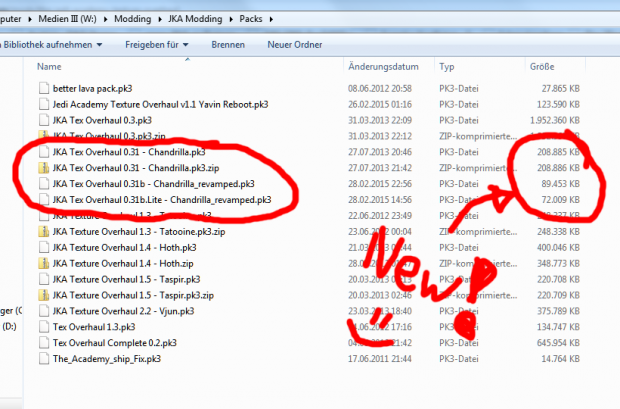 Thank you! Yes I really have to apologize for the long delay of a new release or update. BIG changes in RL and then I started to improve and improve the mod. I'm aiming for monthly updates from now on ;)

glad I got a new computer :D

Hi, even I am glad this mod isn't dead !! :D
But I was wondering when we could have new textures for the other JKA maps that haven't been included in the current versions of "Jedi Academy Texture Overhaul". So I'm asking you when they may be released..
I wait still here your reply ! Thanks in advance :D