The team behind Bushido: Feudal Warfare are delighted to announce that Bushido will now be released as a stand-alone title. To find out why, and what this means for our fans, read more!

Hi guys, We've got quite a big announcement to make, one which will hopefully lead to Bushido becoming bigger and better than it ever was before...

Some of you have noticed that our ModDB page has recently moved and now appears on IndieDB instead. The reason for this is that we've made a decision to stop production on Bushido as a mod and instead focus on releasing it as a stand-alone game.

The feedback and support from both the Chivalry and ModDB community has been overwhelming- and we strongly believe that this decision will lead to us being able to create a game that stands out based on its own merits, not living in the shadow of Chivalry (a game we all love).

This move has prompted us to re-evaluate some of the core gameplay elements, and we can now confirm that the following features are being developed:

We've started to prototype the character customization and new combat elements already- below is a quick visualization that Kieran has created. 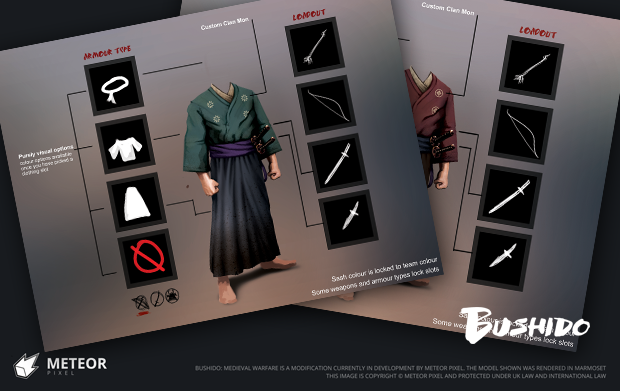 We realize that this new will leave many people disappointed. The decision to pursue Bushido as a stand-alone game was carefully considered and evaluated, and we firmly believe that the game has the potential to do well as a commercial title.

That said- we wont be forgetting about the community that helped to get it where we are today. As such, we're committed to bringing Samurai armour and Weapons to Chivalry once the team at Torn Banner have implemented the Steam Workshop functionality (if they deem it appropriate).

On behalf of the entire team, we'd like to thank everyone who has helped to support us with their comments and feedback.

Sam & the rest of the team

Great news. And at the same time, bad news. You're right when you say 'We realize that this new will leave many people disappointed'. This is good news as well as dissapointing news though. Instead of being limited by Chivalry, Bushido I assume will be able to expand and be more detailed, and developed and a higher quality end product will be most welcome.

Good news, I hope that your combat system will be able to suit this era better than the chivalry combat system would (its a great system but i think it wouldnt work as well with this project). Anyway keep up the great work and best of wishes! ;)

P.S. Will this still be free to play?

we firmly believe that the game has the potential to do well as a (!) commercial (!) title.

Commerical titles can still be FTP, can't they? Isn't that what microtransactions are for? (I don't support them, especially if they limit the balance of players who don't buy them.)

Will you be using the same assets you've already created or will you be starting from a completely new slate? I'd hope all the hard work wouldn't be lost D:

Thanks for all of the support guys, it's really overwhelming, and we really appreciate it.

We will be using most of the assets we have already created as well as building tons more, expect lots of updates soon! (Don't worry basically nothing is being scrapped, only expanded upon)

fack yeah congrats to developers, always wanted to play bushido without having chivalry .

I will fight with a europe warrior against a samurai

Actually that it is wonderful news since you will make your own high quality game and later publish some stuff to chivalry!You should know that you have us supporting you!
But i want to tell you some things to watch out for,
1:You said you will change the combat system from chivalry and that is welcome since it is a different way of fighting in Japan and since chivalry is not perfect but please be careful not to change some efficient mechanics from chivalry only to look different from it (for example the use of mouse wheel which chivalry introduced)your goal must be to make an realistic,effective and fun gameplay even if you use many mechanics from chivalry.
2:Even though it is going to be a commercial title i still think you should do an open beta to promote the game like company of heroes 2 and use later on tricks like chivalry's free weekend gameplay and reduced prices and stuff like that.And please don't forget then your original hard core supporters :)
3:Also what engine are you going to use ?
We (your funs) support your decision and the game seems to get from epic to legendary awesomeness and can't wait for more info!
Cheers!

Thank you MGreg, really. We're incredibly overwhelmed by how well received this announcement has been and we're very grateful for the support.
Sorry to keep it short, but we'll have news posts on our development very soon that will answer your questions in detail! Stay tuned.

This is big news indeed, I'm as happy about this decision as I am concerned. It is true that a different combat mechanic would suit bushido better, but chivalry has the best melee combat out there today and I really hope you guys can top that quality or make it even better.

On a side note, do you guys have an IRC channel?
If not, perhaps you should make one?

As always, best of luck and I'm really looking forward to this already amazingly looking game.

Thanks, Delta! Fear not, we'll do our best ;)
I'll talk to Sam about an IRC channel, in the meantime I'm always on steam if anyone wants to speak to me directly (links in my profile). We also have a steam group that's a little more forum-like.

Cheers for the support!

Omg i bought Chivalry when i found out about this mod, now it's standalone and i'm gonna have to pay for this again...i wasted my money for nothing t_t

Oh man, really sorry to hear that. Hopefully you will still enjoy chivalry though, it's a fantastic game!

Chivalry is an awesome game though. Hardly a waste of money.

Congrats! :) I really hope things come through with you guys :)
Keep up the good work

So, basically, you mean that you now will have to pay to play this mod/game? :CCCCC

Yeah. Bushido is now a full stand-alone game with its own mechanics and concepts. We're obviously still very early in development, so details on things like that will be talked about later down the line. Be sure to track us!

Cheers for the support!

At this early stage- we've got no idea on exact pricing. Certainly no more than any other indie game in the same genre...

I just hope they port to Linux now, I'd pay for sure - test it for bugs for them even!

We're building the game in Unity which does allow us to deploy to Linux- so its definitely something we'll look at :) !

Is it possible to alphafund this game? I would really love to support you guys.

Thanks we really appreciate it, be sure to track us for developments on this kind of thing ;)

not big suprise after rising storm

More mods for more RTS games... nice going moddb!!! BECAUSE THIS IS SO TOTALLY DIFFERENT! -_-

This is neither a mod nor an RTS game...

D'aawwww. Did someone forget their literacy at home? Do not feel bad, it happens to the best of us!

i like this :)... but this, is Singleplayer or Multiplayer?