Well the time has come for the big release: Battlegrounds 2 1.5a. This game adds a variety of features. Shots and description can be in the last news post. This release has been a long time in coming, but we have some big changes to add. The new features add a whole new dimension to the game, especially ironsights and capture the flag. Over the past few days we've continued to test and fix little issues with the game. Special thanks to HairyPotter for working hard right up until release to fix bugs, and thank you to our beta testers and beta test servers who have helped iron things out: 3D clan, AP clan and SS clan. 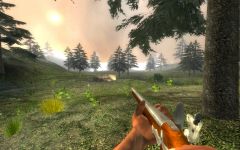 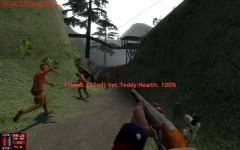 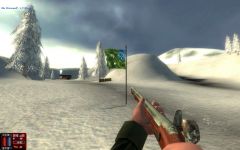 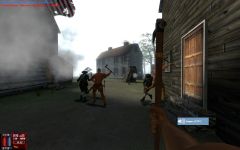 1.5a 2009
Iron sights added.
CTF mode added.
King of the hill settings added (You turn flag's fullcap setting OFF in hammer).
Spawn kill prevention added. ( sv_saferespawntime )
Much more HLStatsX support.
Fixed a bug where people who leave a flag while the capture timer still counts can return and finish the cap even though they'd stopped capping.
Added Native and Militia class.
Added bump mapping on all weapons.
Added bg_germantown_b2
Added bg2_maptrigger entity for mappers, which can do outputs on Round and Map wins for each team.
Tweaked the class selection menu a tad. Thanks to Area51.
Added hud_takesshots, which will make clients take screenshots of the scoreboard on map ends. BG2 Options entry added.
Flags will no longer continue to give points to teams once the round has ended and everyone is frozen.
Adjusted the player's camera position, so it's a little higher off the ground when crouching.
Fixed a bug where a voicecomm will stop a weapon's reload sound.
Added Tjoppen's new bullet physics code for (non) simulated bullets.
Simulated bullets model is now invisible, and it's origin shifted to the right of the player's FOV.
Added the Forcecap input for flags. Which forces the flag to instantly cap for a certain team.
Added a "starting team" setting for flags.
Localized some text strings, so that lang files could be set up.

1.5a issues:
Native has no voicecomms.

EPICNESS! You guys are great!

Cool, downloading now. I didn't think that you guys were still developing this.

Lots of good times from the original, so I think I'll try out BG2

Awesome, I've been a BG/BG2 fan for many years now, it's great that you guys are still updating and changing it. Also cool to see 3D and SS helping you guys out, in the past I have been in both clans at one time or another.

Add a proper bg_linebattle to BG2!!

It's really great. Fantastic work guys, this post is a little late, the game was up for download yesterday morning or something. Was happy to see so many people playing it. I'm not sure if this is true but it seems as if the bullets are now fast projectiles and not like instant calculations like in Counter Strike. I'm not sure if thats true but that's what it feels like. Either way really loving it keep it up :)

Thats not a new feature

Oh wow, I'm surprised I never noticed that. I used to play it a lot too :P Maybe the projectile speed was decreased? Or maybe I was just lagging lol

Help! BG2 won't find any servers, and when I get one finally, I can't connect to it. Someone help, I have 1.5a

Hope there'll be a WSIP-feature about BG2, soon! Mod definately deserves another (short) review for the current release.

Finally an update after all these monthes :D

wish i had half life 2

People still don't own Half-life 2? They have pretty much given it away for free through all of their sales.

Must say that I rather like what I've played so far. Only complaint is that you can't switch weapons after you've started reloading. While I can understand why it still makes countering the sword chargers a little hard sometimes. And it seems a little silly that a solder would just keep reloading happily while he's getting carved up. :P

does it work with the orange box version of HL2?

Yes, in fact I think it's required.

it doesn't matter when you purchased HL2 or how exactly you got it, even just HL2: Episode One or Two should work. In fact the access to the Source SDK is the only hard requirement, and that is unlocked with almost any source engine game from valve

Ummm, yeah... I'm trying to get a server haha. I don't get it at all. I run the file, brings up WinRar and then I don't know what to do. Are there any sites that can host a BG2 server for Americans for a low price? Or how're y'all doin this? Hahaha