Some information about BFME: Tactics beta, new features and plans for the future.

In a few weeks new BFME:Tactics beta will be released. On this occasion we decided to say few words about beta itself, new badass features we were painstakingly developing for a long time and share our plans for future releases.

When we started developing BFME:Tactics we merely planned to create another BFME 1-remake with enhanced graphics, new units and other innovations in gameplay. However, as development was moving on we understood that it had to become something bigger than just another cool mod. The idea of changing whole mechanics, converting them into “classical” RTS macro- and micromanagement style has not come easily to us. Spending hours of analyzing different strategies of old and new like DUNE series, CnC RA/Generals, Warcraft/Starcraft, it became clear that BFME always had its own, unique mechanics in a way. Now matter how we love good old BFME (and we love it so much), we were still not satisfied with the fact that players cannot actually run low on resources: resources cannot be depleted, therefore most players tend to camp a lot. Although having big respect for how it always was in BFME series, it became clear to us that bold actions are to be taken in order to create a truly competitive game.

First thing we did was borrowing HARVEST system from forefathers of the genre. Like in any other RTS, harvesting is the most important part of BFME:Tactics. Difference is that now you need to send workers to a mining shaft in order to collect your resources. As you probably already guessed, you can run out of them, so you have to be more active and secure more bases in order to survive. 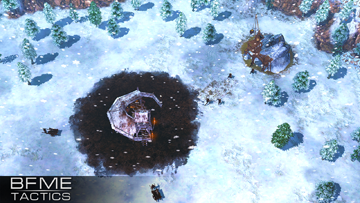 New harvesting system brought another change. You don’t have big fortresses in the beginning. You start with small warehouse where you can hire more shaft-workers, builders who actually build stuff (that is 2 different type of workers at this moment) and scouting hero. You can also buy an upgrade for your shaft-workers to harvest better. Farms have been changed aswell – they now only give command points, not money.

Second change is area restriction and new outpost system. You can create structures in the way you like around your warehouse, or on building plots near outposts. In early releases we mentioned the way we changed outposts system. After you secure an outpost area you have to decide what kind of outpost you need to build (whether attacking, defending or economical type).

Another change we are currently testing is power point gathering system. The idea of the change: on certain point of the map spell book respawns. The player who gets it first and brings back to his fortress (not warehouse) receives 2 power points. We believe it might add highly dynamical competitive experience. 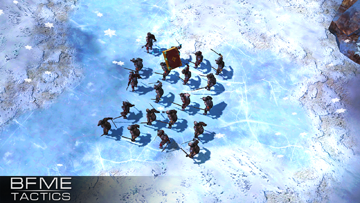 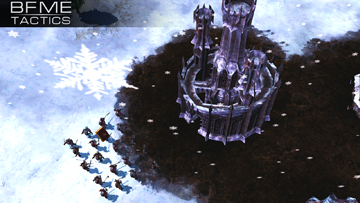 Our priority is to make a competitive multiplayer game. We invited highly skilled BFME players of old to help us to hone balance. However, you are all welcome to say your piece – we are opened for discussion and glad for a constructive criticism.

A little New Year teaser for you folks: we added several more changes that will help to change gameplay in a more dynamic and tactical way. All this you can see and test soon enough! In first beta there will be 2 factions (Mordor and Gondor), 4 new maps and automatic installation which comes with updater to help you get new fixed versions of BFME:Tactics seconds away from the release!

After releasing first beta and fixing all bugs we are planning to continue developing rest of the factions. Hopefully it won’t take too long and we will manage to do it in “one update – one faction” format.

Thank you for all your support you guys are showing us! It is because of you we made it into the top 100 on moddb.com! We hope you will like the result of what we were working for that long. 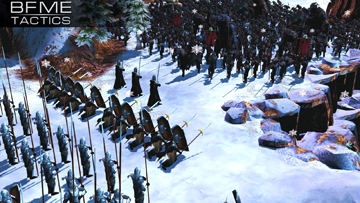 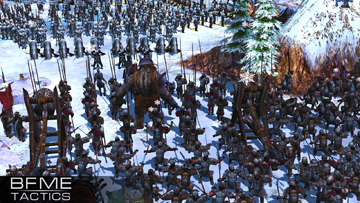 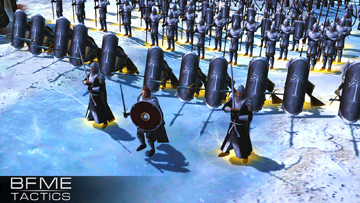 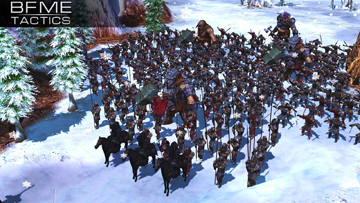 This will be awesome! :D

This sounds really good to me!
but how about installing the mod (I know that there will be information when the beta is out but still...) do you need any "special" things to instal it proper like: english version, extra patch, mod free version (I got self RJ-rotwk installed) etc...
I am really excited for the Beta!!
keep it up!!!

Any language version, 2.01 version ROTWK, without any mods.

thanks for your quick reaction, now I can prepare myself for this amazing mod!! :D

One word...Awesome!! I love the idea of the new harvest system. And I just cant wait to play it.
Only one question, does it have an AI? Or its only multyplayer?

Excellent!! This mod will be epic. Good job

...Will there be a possibility to build walkable walls around your base?