Greetings everyone! We plan on releasing the new demo sometime tomorrow and just wanted to remind everyone of what to expect and what exactly has changed (everything, literally everything!) Let’s start with the biggest change, the playable area: 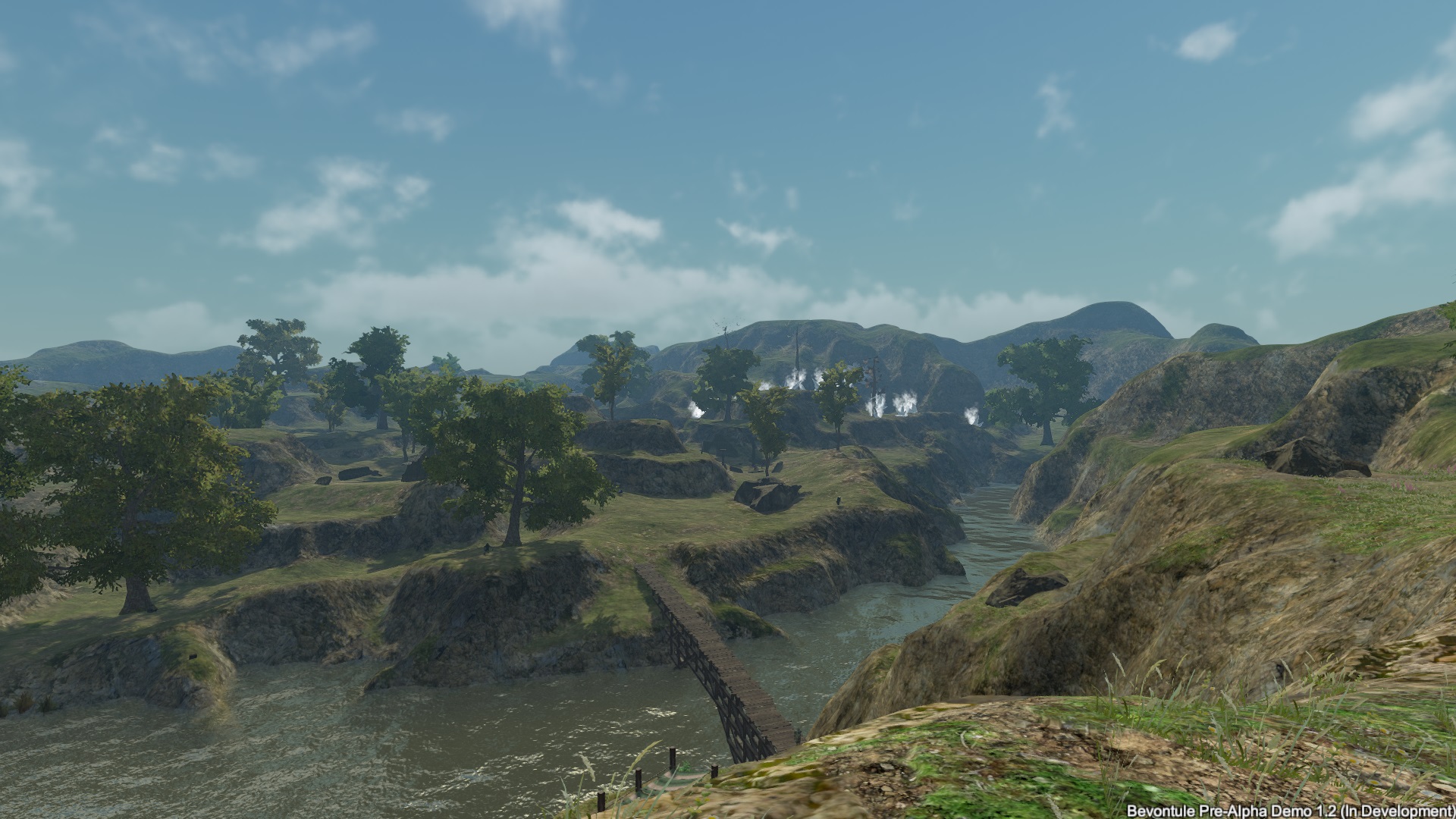 The Atonian Steppe, with its rich history and colorful inhabitants makes another reappearance as the setting for this particular demo. You might ask, why this same area? For the initial release of Bevontule, the Atonian Steppe will be one of several large and playable areas, but really, is the only ‘open area dungeon’ currently envisioned. What this means exactly, is that while it isn’t the only planned location in the game, it’s the most suitable for presenting all of the gameplay elements that we have so far established.

As you can see from the picture above, we have massively revamped this area. It looks so different, in fact, that it might as well be an entirely different location. If you’re not convinced, check out any of our previous videos for comparison! I would like to reiterate that while this isn’t necessarily a free-roaming open-world game in the vein of something like Skyrim, there will be a massive world map which will connect areas such as the Atonian Steppe to many, many other areas (Cephaline, Molsha (the subject of our first demo), Auvane, Sallasat and Yelev, just to name a few.)

While we’re not quite ready to give away big plot details just yet, it’s safe to say that the fledgling player will be spending a lot of time in the Atonian region and as such, we wanted to spend a large amount of time fleshing out the region and its inhabitants and backstory. Even though vast portions of the world have been claimed and rendered uninhabitable, the steppe represents a sort of relative ‘safe area.’ For a little while. 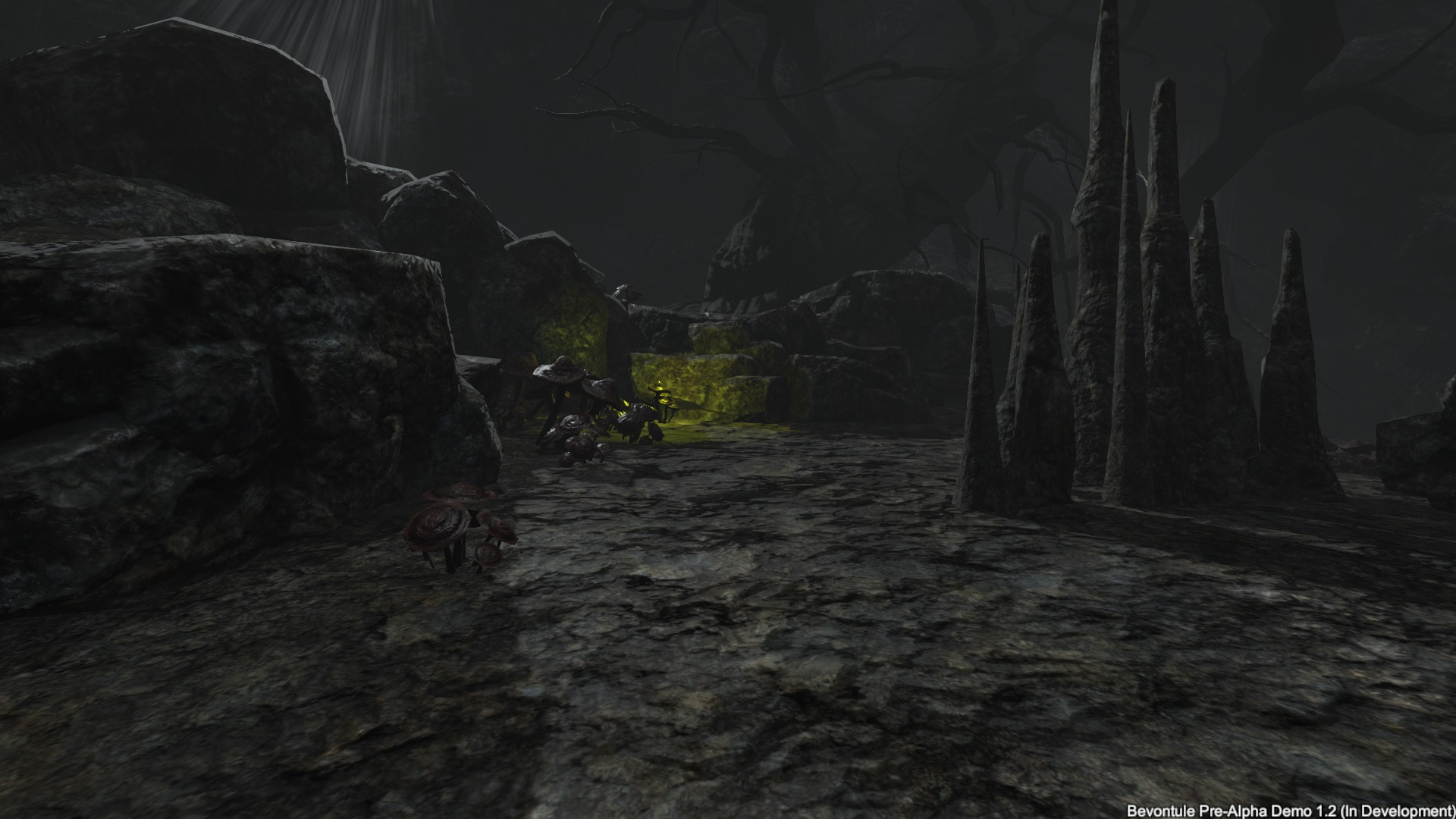 If that’s not enough, we’ve also made huge changes to the optional area below the surface, a large cave system that connects the two river-split sides of the steppe. Down here you’ll find more treasure, more enemies, more detailed environments, and who knows what else?

As in the previous demo, the goal will be to find and vanquish a large foe waiting on the other side of the river. I want to further reiterate that the in-game plot and motivation will be far different and the appearance of the ‘Kundalini’ is more of a contrived situation that drives the plot of the demo only. While many aspects will remain the same in the actual game, the reason for exploring the steppe will be different, as will the story itself. What I’m saying basically is that this demo is more setting and less plot.

While enhancing the environment art, it became clear that our current enemies were no longer up to snuff. While we don’t condone chewing tobacco here at Multithreaded Games, we figured we’d go ahead and attempt to improve them anyhow.

We were able to improve a large portion of our enemies, but were unfortunately time-constrained to finish them all, leaving one or maybe two behind in the process. The new enemy designs are well worth this small sacrifice and we were able to shuffle certain skills and behaviors so that everything from the previous demo was mainly kept intact.

In addition, we’ve added new skills and tuned many old ones as well, for both enemy and ally. I won’t spoil all those changes, so you’ll just have to play it and find out! I will, however, spoil a few of the upcoming enemies and give a little more information on each of them :) 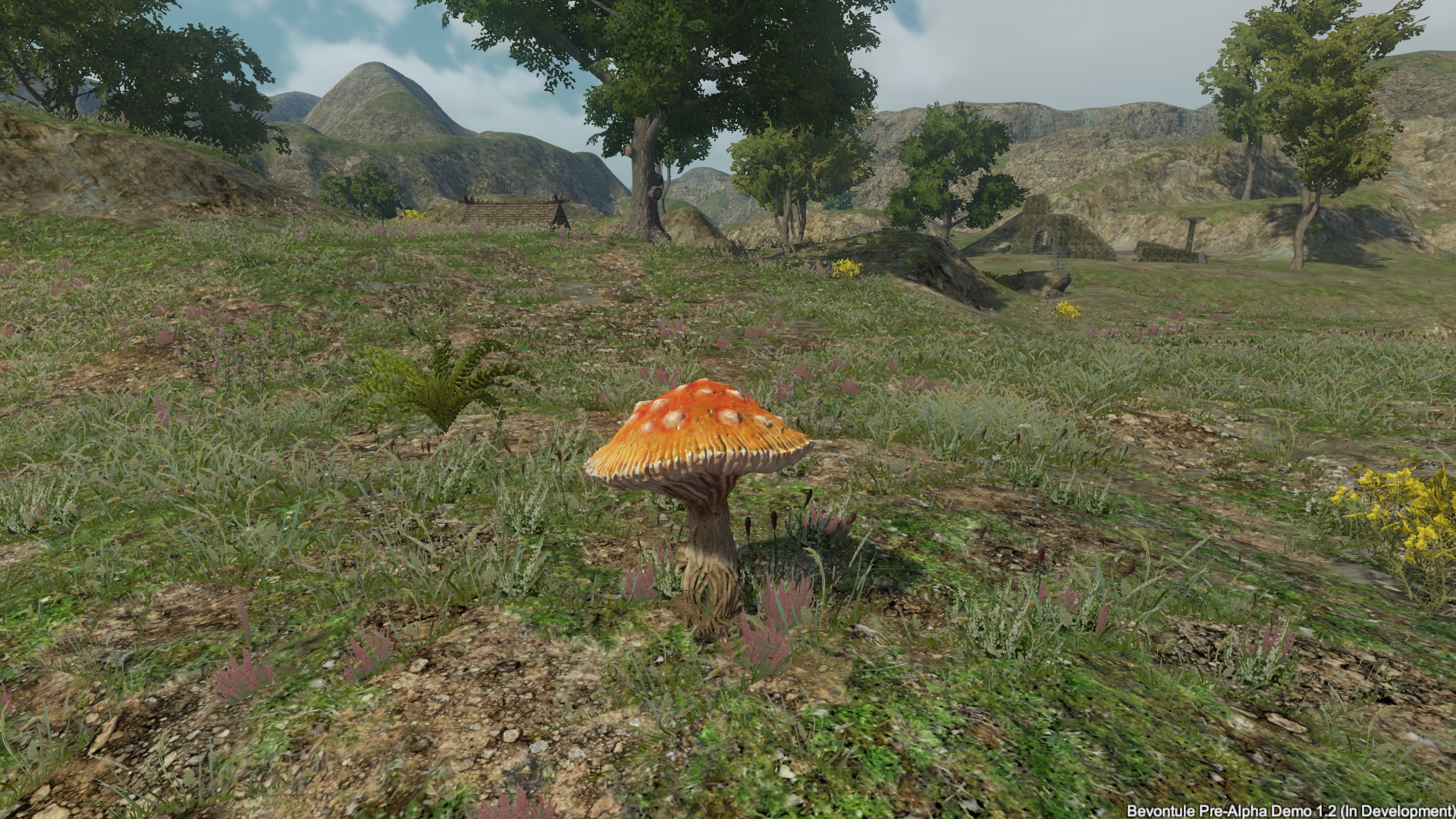 A hefty, but otherwise unassuming fella, Scabrums typically keep to themselves while roaming the wilderness. While they are solitary creatures, they’re unique in that they’ve formed symbiotic relationships with nearly every creature on the steppe, tending to follow them in search of whatever scraps might be left behind.

In exchange, Scabrums lend their support to enemies whenever possible, pumping out copious amounts of Aggressive Spores, which enrages nearby foes. They aren’t afraid to get their hands dirty either: stand too close and you’re liable to be smacked by one, their attacks occasionally inflicting Slow on their hapless victims, allowing their companions to score the finishing blow. 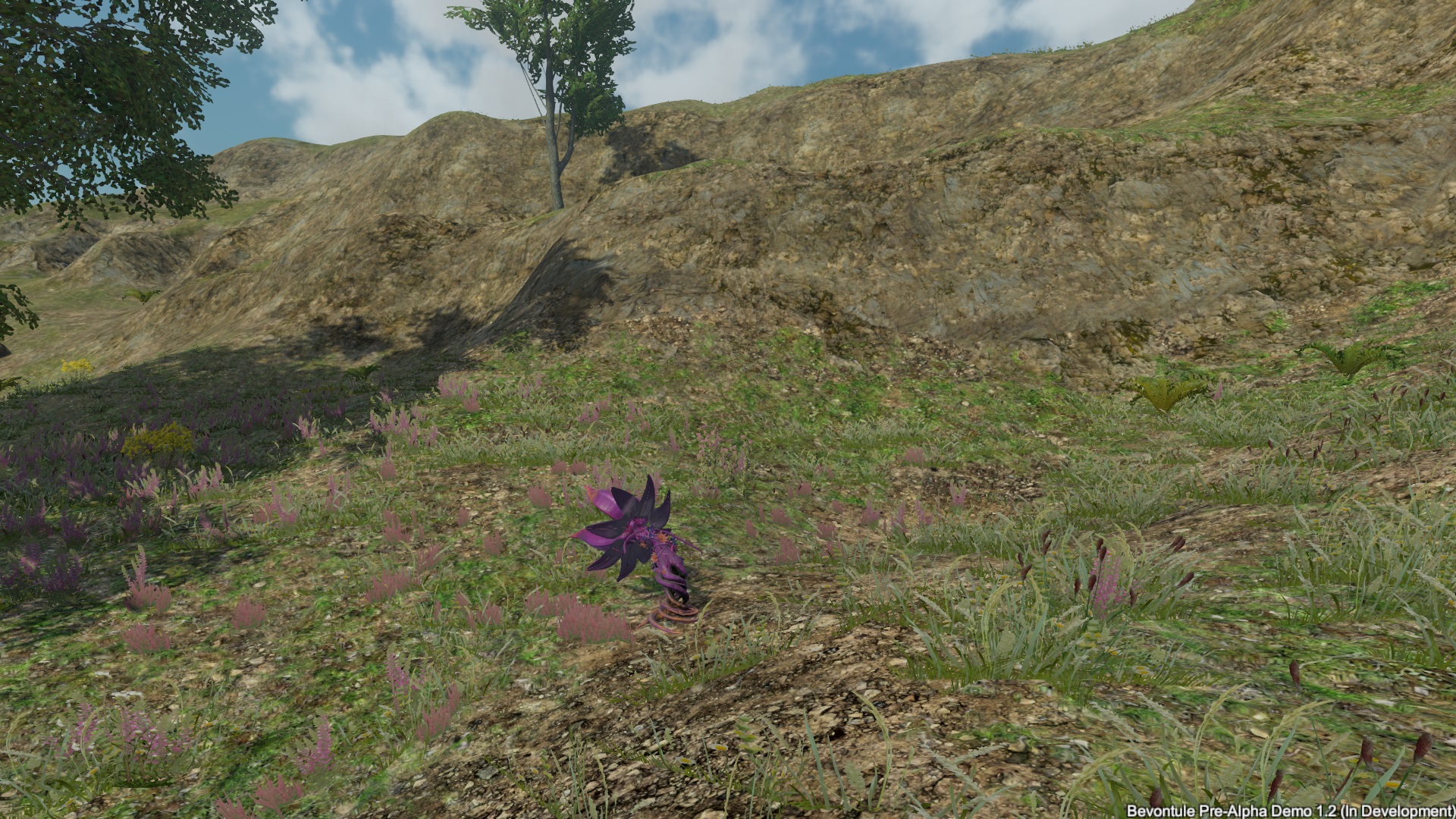 A vicious and cunning carnivore, Hyderangeas are mobile, unlike their rooted counterparts, the Elongata. While slow and meandering, they pack quite a punch with their rampant Seed Blasts, hitting multiple distant targets from relative safety.

In addition to their nasty bites, they tend to spew Poison Breath when they can, preferring to catch as many as possible in their putrid haze, watching as the victim succumbs to their unnecessarily strong poison. Take advantage of this skill’s long charge time to reposition allies or use Moroch’s Spinkick to send them flying out of range. 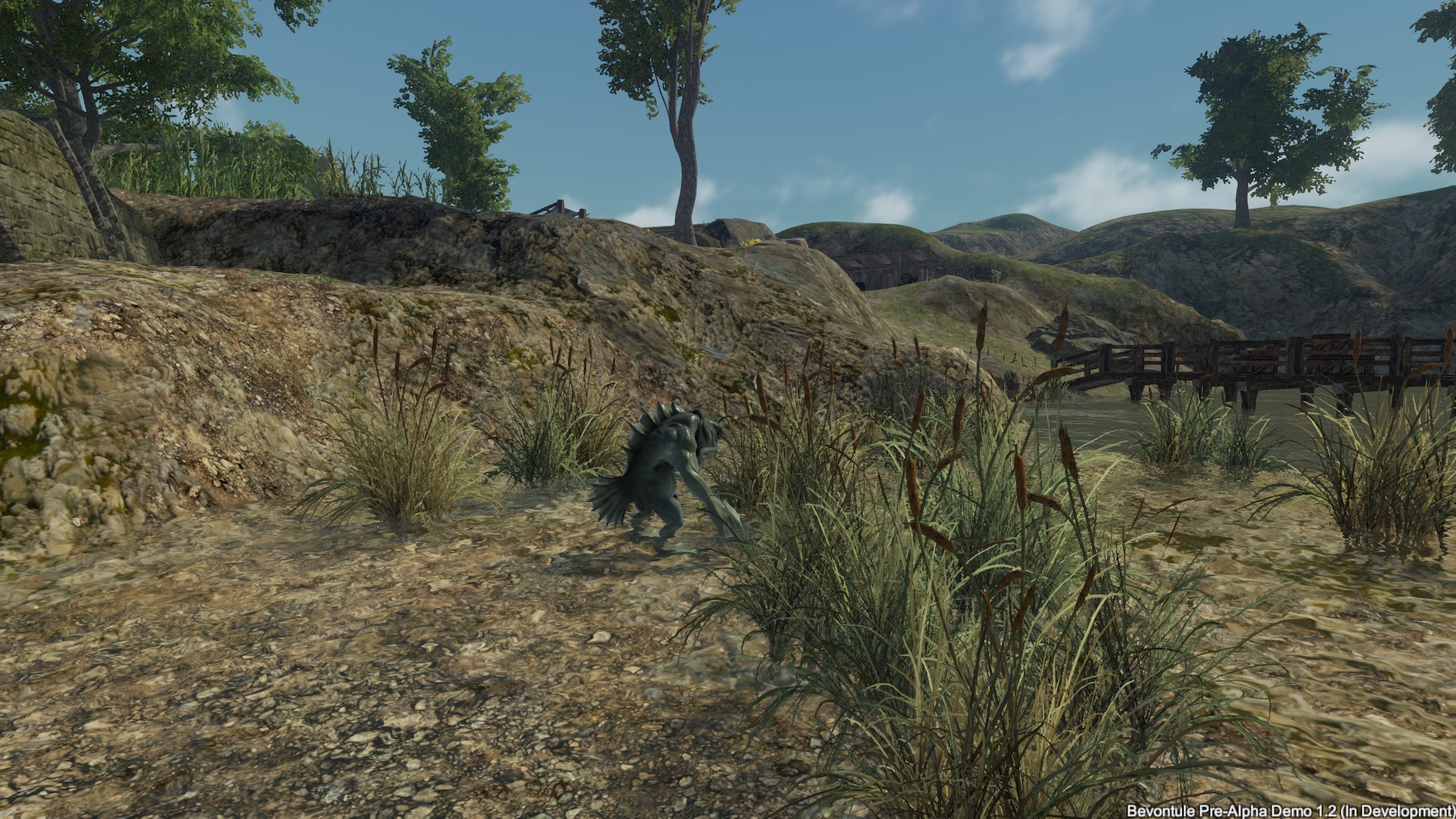 Adaros love catching unsuspecting prey (and travelers too!) along the banks of the Salinas River, using their signature skill Rend to deal a devastating bite to their target.

Short-tempered and unpredictable, it’s possible that an Adaro may unleash a single swipe or possibly more on a single attack. To make matters worse, their bobbing lights serve a functional purpose as well: gather up too many allies in a single area and you’ll be hit with Blinding Lure, a magical attack that makes up for in damage what it does to your allies’ vision. 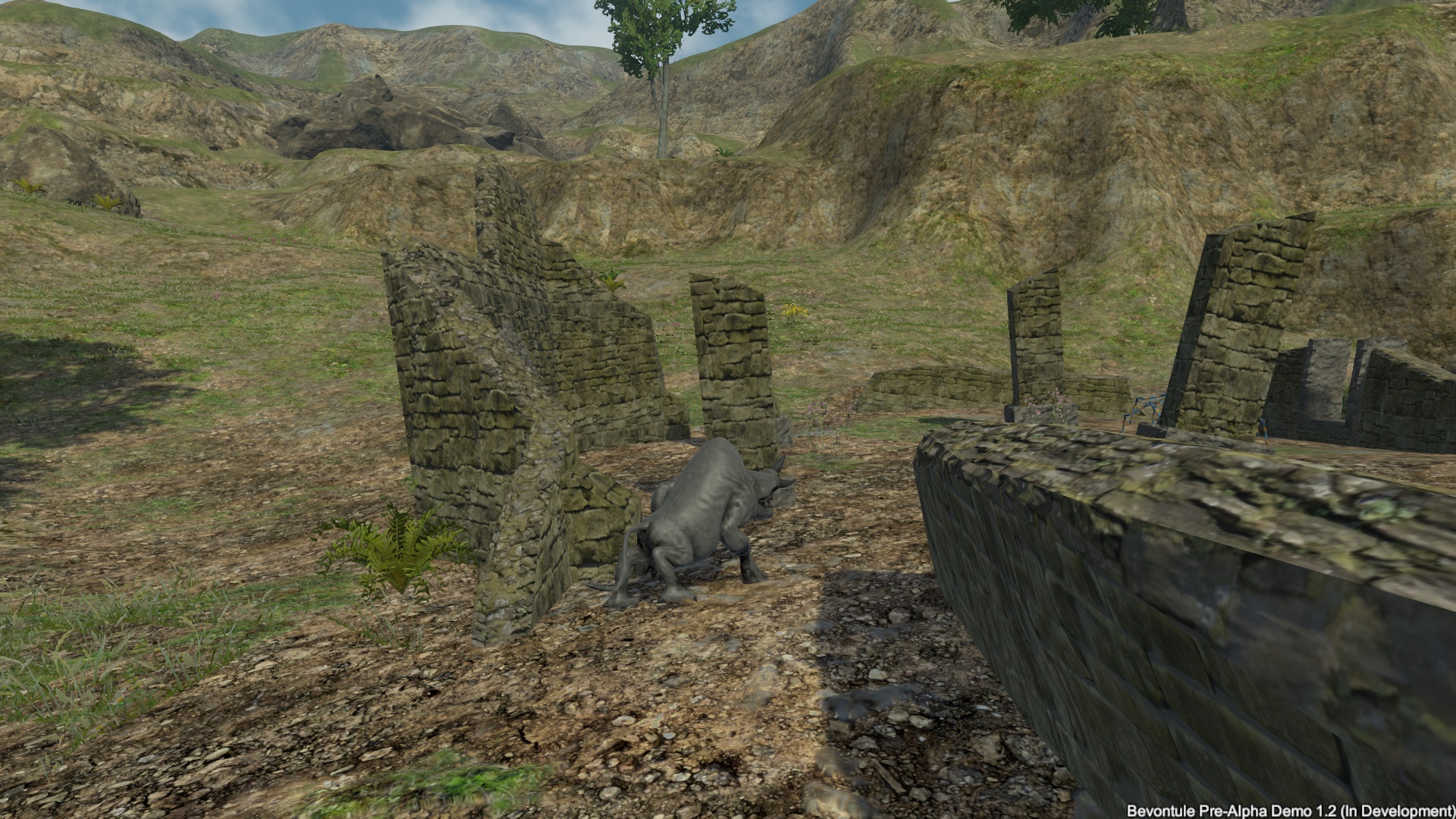 Brutish and utterly unreasonable, Karakdons roam the steppe sluggishly and seemingly without purpose, largely avoided by the other denizens of the steppe. Despite their menacing appearances, they are actually herbivores and aggressively drive competitors from their territory using Fling.

While their physical attacks pack a punch, they’re mostly known for their deep and agonizing vocalizations, their Howls weakening all nearby foes, while dealing a small amount of damage (and tinnitus!)

For much of Bevontule’s development, we lacked a nice and cohesive framework for properly animating NPCs and enemies outside of battle. Without getting too deeply into the nitty-gritty details, we took some the time to develop a system that allows us to assign arbitrary animations to NPCs and enemies and trigger them to play based on a number of different conditions.

We’ve also revamped their appearances, quests, mannerisms and functionality as well, allowing for NPCs that display disgust or anger when you fail to complete a specific quest or ones that might even be able to provide safe passage to the other side of the Atonian Steppe… for a fee, of course!

Conversations, buying, selling, inn’ing, resource harvesting, chest looting (OK, these aren’t NPCs, but still…) have all been vastly improved in terms of the responsiveness of interactions with objects as well as the amount of time spent doing so. 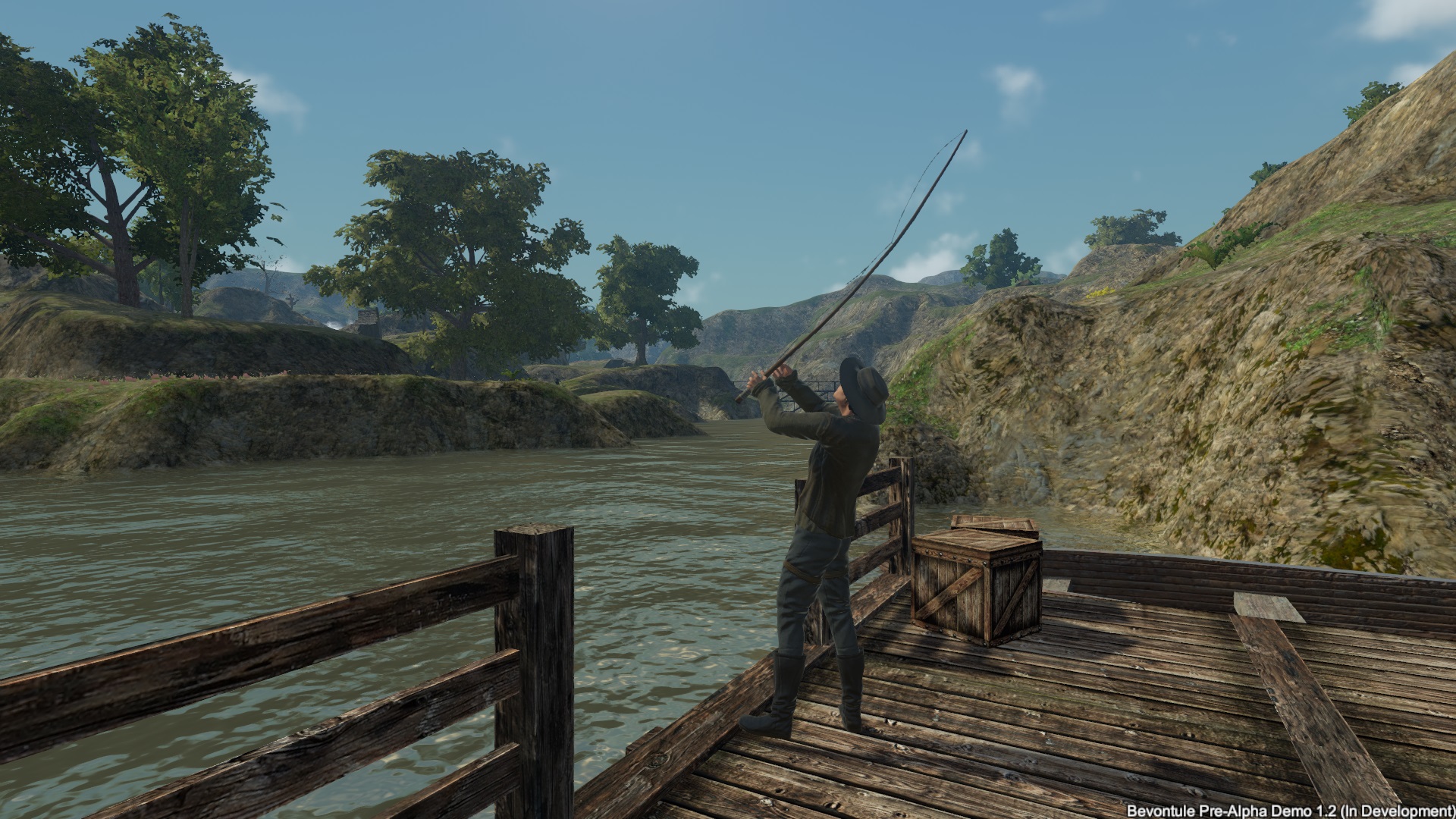 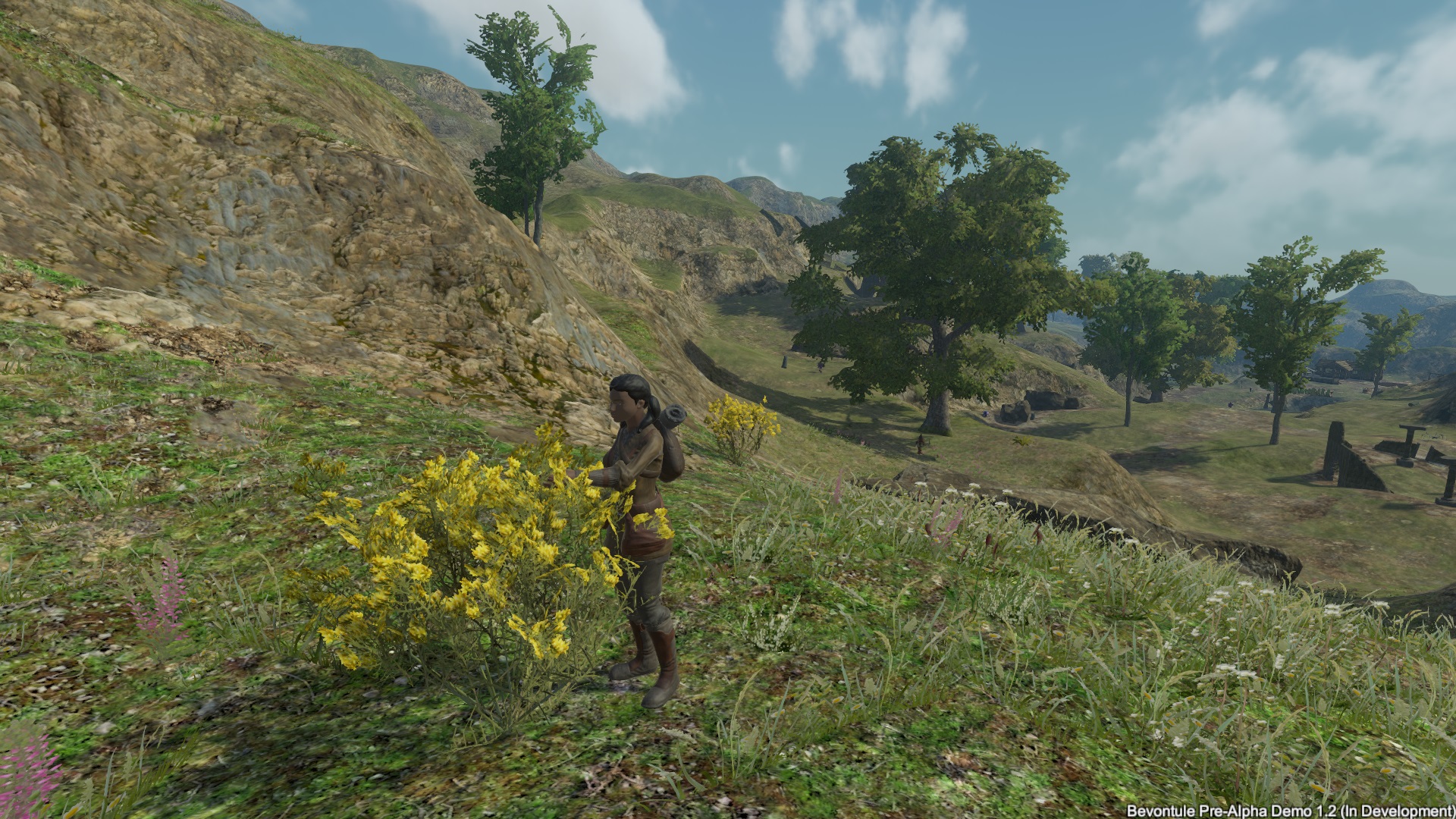 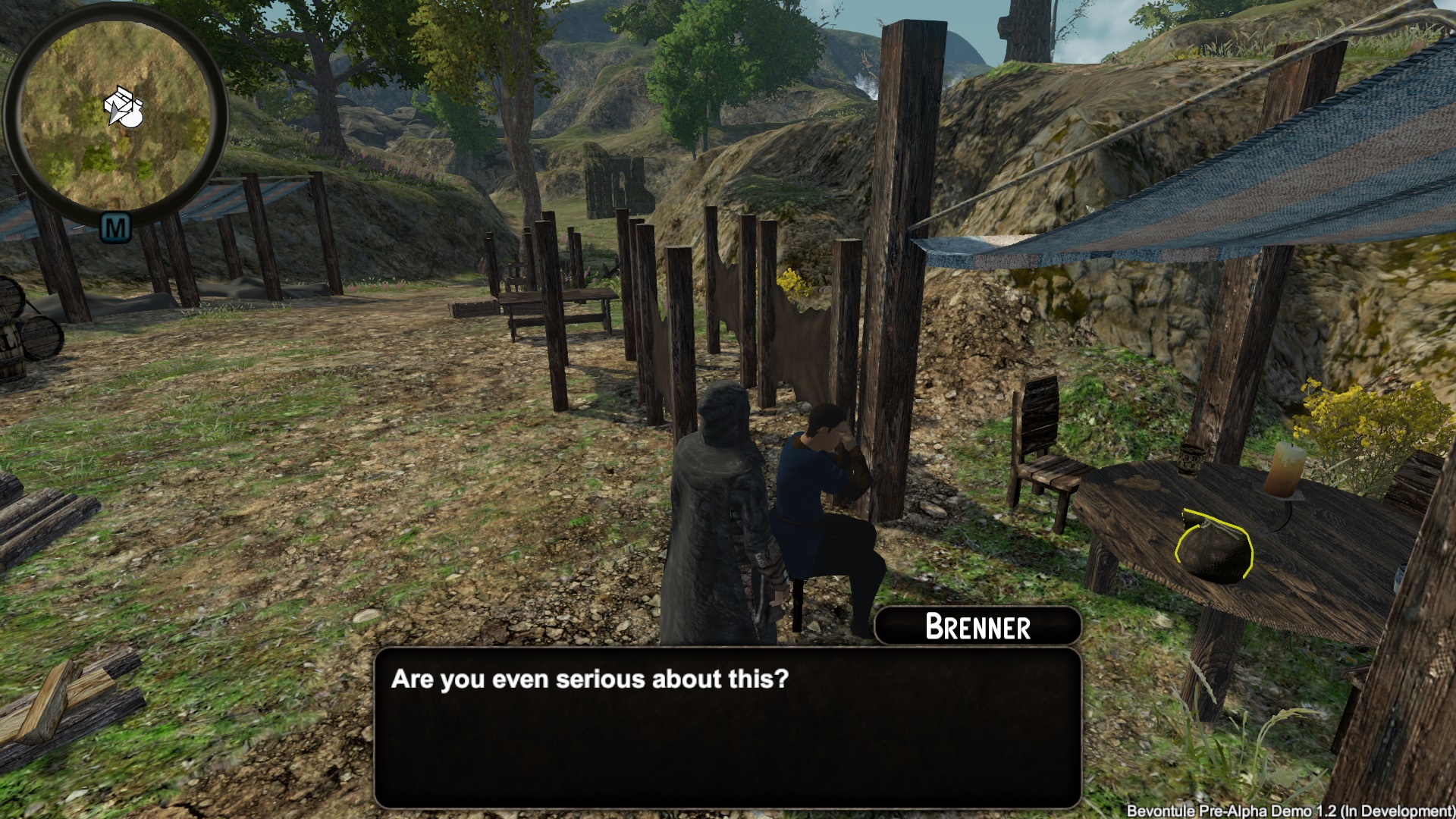 Many of the improvements in battle have come down to bug fixes, visual enhancements, AI improvements, increased usability and oh yeah.. bug fixes. Battle should feel a million times (official measurement) smoother than it previously did and enemies are less likely to make bad decisions when fighting you.

The very act of going to battle has been improved dramatically as well: enemy collision boxes are more accurately reflected, chasing behaviors have been vastly improved, enemies have more realistic vision and engage radii, enemies may appear asleep or hidden until a certain proximity, enemies now animate during waypoints and much, much more.

There are so many more things we have improved since our previous demo, but it’d be impossible to list them all. You’ll have to trust us when we say that the new demo is every bit as compelling as the old, but has all the polish of a completely new game—and we’re just getting started with everything that we truly want to do with Bevontule.

We hope you’ll give it a try tomorrow and we look forward to your thoughts, impressions and feedback!

(sorry for bad english) Pretty nice game, but need alot more improvement, I think this game need fog system like skyrim and the combat too slow

Thanks for the feedback! We were trying to find the middle ground between two extremes: either you have super short and mindless battles or you have drawn out, complicated battles. Since enemies can largely be avoided, we wanted the player to be able to choose his or her fights while still feeling a sense of difficulty and achievement after each encounter. Per our own stats, average battles last two to three minutes (of course we are slightly biased, being the developers), but I'd say we can reduce the time even further.

Thanks again for trying the demo and for providing your feedback!

Hope you guys complete the game