A Public Beta has been released for Operation Dead Dawn, as of October 31st 2009. Here we explain the Mod's basic gameplay features as well as some tips.

This is a Halloween present from CrazySoldiersProductions. Click the image above if you haven't already. 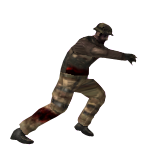 How does the gameplay work? 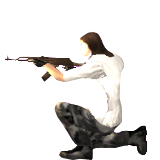 Every zombie begins with 3 "lives". Every time they are killed they lose a life, but respawn on their corpse. Every time they get a kill, they gain a life. Once all of a zombie's lives are expended, they are fully dead. However, each wave, these fully dead zombies are given a life and allowed to respawn. The goal to win is to prevent the zombies from spreading by having them all dead simultaneously. Zombies get harder, or easier depending on how successful the survivors are coping, so the game is leveled to your ability to stay alive.

As a twist, after you have killed sufficient zombies, they form into the mighty Goliath - a 15-foot tall zombie made of 39 corpses. This serves to shake things up if you and the zombies are at an equilibrium (When it kills you, the zombies then get scaled back, and you may just have a chance at winning as a result). 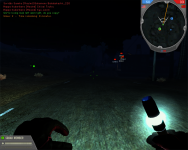 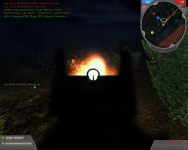 If there is a zombie massacring your team, it may pay off to be a martyr. Take one of the pill bottles lying around the city (press Q, right-click spotted, and choose "interact"), and the next zombie to kill you will be knocked back to one life. The pills are limited, so you need to wait until the right moment to use this ability. The pills are very useful against the successful zombies like Gore zombies, or Goliath, how have a tendency to rack up a lot of lives.

A certain amount of bold decision making is required, but it does pay to think before you act.

* It pays to know which type of zombie you're up against. If it's a one-arm zombie without a human shield, you can probably get away with a close-range shotgun blast to kill it. If it's virtually any other type of zombie, this will get you killed. Remember that they generally kill from close-range, so your best defense is distance. With Gore zombies, this isn't necessarily true, a couple of knife shots can often be the safest way (strafe as you knife to confuse it).

* The Type-85 kit has an LED Strobe Light, which is useful for seeing in the dark, so you might want to have a team-mate light up the way as you go through to make it easier to see zombies in the shadows.

* If zombies are rushing your base after a new wave, it might just be the perfect time to sprint past and try to capture their spawn point. Zombies can quickly recapture the spawn point, but while they capture, they will not chase you. Just watch out for Gores and Snipers, because they can still kill you while they take a flag.

* If you're running low on ammo, don't wait until it's too late; pick up one of the weapons lying around the city and fend them off! Most of these kits offer unique advantages, such as a periscope, a 20mm Sniper Rifle, or a powerful Single-Action Revolver.

* Remember to use your brain. Just because something is there doesn't mean it's useful, for example, there is a camera, but what good could that possibly do?

What settings should I use?

For best results, set the bot number to 36, and the bot ratio to 90. The balancing is delicate, and it's set to work best on this. Of course, you can tinker it to your taste, a lower bot ratio will result in a faster game.

Downloading for sure :D

Will be gettn it :D

This is great, even with bots! Put some servers up!

Can't wait to try this one out. Downloading and tracking

join the server!! im in it right now! uncheck no vehicles and check same mod and it will be there