Here we go with Beta Version 03 of Dibella's Watch, downloadable on ModDB. Read more about it here.

The mod is growing by the minute, and during the last week a lot of interesting stuff has been added! This time, you can download the mod right here on ModDB as well, so go ahead and check it out. As always, any bugs should be reported, so I can solve them immediately. Keep an eye out for more updates and possibly patches too!

I've added more than a third to the landmass of Dibella's Watch, and although this is still uncolonized and untouched for the most part, I will probably fill it all very soon. you're welcome to visit The Deadlands out west and see where the action will take place, but right now, there's nothing much happening there. As in the previous update also, I've done masses of landscaping, interior work as well as work on NPC's. There's some new resources available too; cows for instance (on popular demand). Enjoy Beta 03 while I start Beta 04. 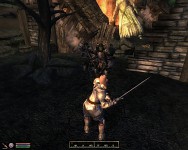 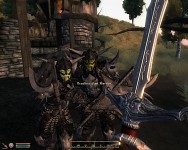 - More interior work done. Wordham Castle, most notably.
- A large amount of landscaping has been done.
- Worked on the City State of Vernuzen with adding NPC's and interiors.
- Dressed the Woodelf Queen finely in a new white dress.
- Added the Factions Alcoholics' Guild, Vernuzen, Wordham and Sachsmoore and assigned NPC's to them.
- Added Cows (on popular demand!) and a Dairy Farm with a farmer family near Port Zerrva.
- Added Wolves to infest the northern areas.
- Added a large amount of land in the west and north. These parts are still uncolonized.
- Wrote another quest, "The Pirate Treasure".
- Fixed an issue with a couple of guards in The City who wouldn't go to Barracks to sleep.
- Fixed a missing texture in Birkfjord.
- Fixed missing female Redguard Bronze Armour. 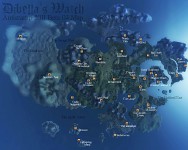 How is this not full of comments? This mod looks incredible and really deserves more attention. I'll be sure to keep an eye on this and review a later release. We posted about the mod here: Modsentry.com and hope to cover it more in the future.

wow this is impressive... this is the type of mod i have been looking for, for a while now... Im going to download it right now!

Sounds excellent. Be sure to track the mod too, because there are large weekly updates.

Thanks! I'm going to get more screenshots together soon, but I have had no time tonight. I have written a completely new quest. I need to get more stuff for the player to do into the mod. Quest-writing is rather time-consuming.

good stuff you got here i love those enemies there. good luck with all your future modding.

Thank you kindly. I'm going to have even more units for the enemies when I'm done. I'd really like them to have some sort of giant black spider assigned to their army too.

Tracking, surprised Bethesda haven't stolen it and sold it as DLC ;P

Thanks. Naah. Bethesda is busy with other things right now than stealing stuff for old Oblivion. Did you see the new trailer of Skyrim? I mean - YUM!