Post news RSS Behold! Story of a Cube is on IndieDB!

Is this something to be excited about? Oh yes, it most certainly is.

Finally, Story of a Cube has its own IndieDB page.
Since it's completely new, I'm guessing nobody really has any clue what this game is about. Let's change that!

What is Story of a Cube?

Story of a Cube is a 2D top down shooter game with really intense gameplay.
You can play it with your mouse and keyboard, or plug in a controller for some extra fun.
It's in pretty early development, but already features seven different weapons, one special weapon (need to make more of those), an awesome boss fight and lots of explosions!

I'd describe it more in detail, but as we all know, a picture says more than a thousand words.
Also, a video is made of thousands of images, so here's a video instead!

As you can see, I'm not very good at making trailers.

So how's the game coming along?

Why thanks for asking! It's coming along very smoothly.
I've already taken care of several big programming issues, such as difficulty levels, achievements, weapon upgrading, etc.
I prefer to deal with these things early in the development process, as it's much easier than trying to implement them into a game that's practically finished. (Trust me, it's hell).
Anyway, right now I'm working on the game's second chapter. The first one is already finished, and has a really epic boss fight in it. I have a feeling the second one is going to be even better.


Another thing I'm currently working on is the soundtrack.
Making authentic 8-bit music is quite different from other kinds of music, as it's made using a certain program known as a tracker.
The tracker lets you input a bunch of notes and hexadecimal numbers for things like volume and effects.
The whole thing is actually quite limited compared to modern music making tools, but the result is real, authentic 8-bit music that can be played on an NES. 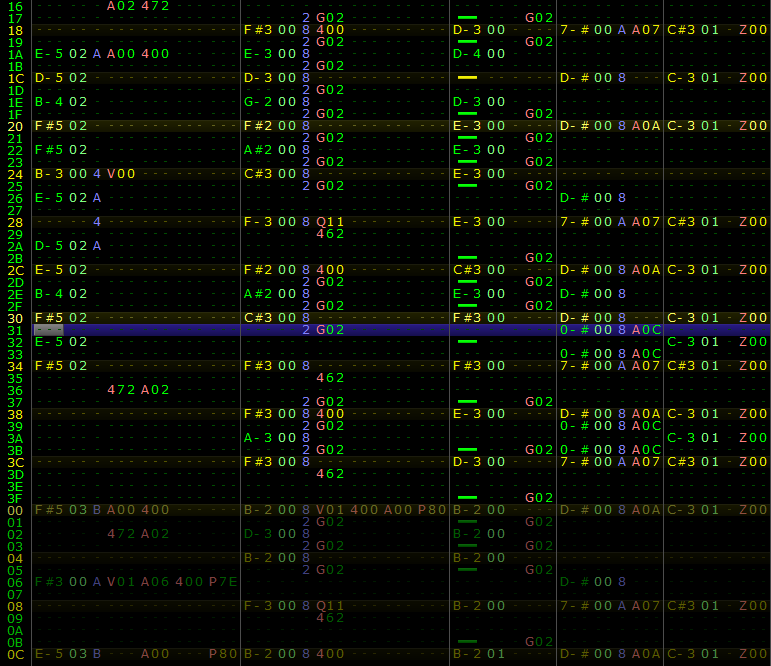 Your game looks fun! I was just commenting to point out that you say you're not very good at making game trailers, but this is a very good trailer compared to most of the ones I've seen on IDB. Good luck with the game!

Really? Thanks, that means a lot to me :D

:D no prob! It actually inspired me to start working on a trailer for the game I'm working on right now.