Soon, on August 31, a new game from the remade Battlestar Galactica universe will be launched. I say remade because there is the old from the first tv serie and the new from the last tv serie. The new game published by Slitherine and created by Black Lab Studios is based in the new universe, in the time from the first war between Cylons and Humans. (An important consideration from these videos/information. It was made with a beta and it is not the final game. Somethings can be different)

If you have followed all the stuff showed in the last years from this universe, probably you will compare the game with the prequel from BSG named Battlestar Galactica: Blood & Chrome which it is ambiented in the first Cylon vs Humans war.

About the game itself, it is strategy/tactical game, based in the previously created by Slitherine/Black Lab Studios Star Hammer. Both games are similar at concept with turns-tactical mode where you give orders and you can watch 10 seconds of action. But at Deadlock, the strategy part where you can create units, move them around a galactic map and at general, administrate fleets is more complex.

As Star Hammer, Deadlock will be published for PC and PS4. By this reason, the PC version has optional gamepad options as you can see in video. Other options are symple, without nothing too complex and more than enough for all players.

I go to center me mostly in the singleplayer because I am a guy more from singleplayer, in the past 17 years ago, I played a lot of multiplayer games but they were times where the AI was poor. At this game the AI is good and it will give you more than enough fun.

For the record, I have been testing this game from the end of April but even if I know it very well, I can not considered a very good player. I apologize if you see how the Cylons defeat my ships easily. :P

Other very important consideration from this preview. I have made with a beta and it is not the final game. Somethings can be different.

At first place, I go to show you some about the skirmiss mode. This mode is more than enough complex, as many other game, it is the easier way where to play battles and to train for the multiplayer games.

More advanced than the skirmiss mode from the older Star Hammer, you can play with the Humans or the Cylons. You can assembly your fleets or select the defaults, always following a amount of points. The limit of points is mostly because the skirmiss mode, mostly equal to the multiplayer mode, it has not difficult levels as the campaign. By this reason, you can not add a fleet with several Battlestars.

8000 points is more than enough for a good fleet. You can add ships from all the type, each type has a cost. Organized from most expensive to less expensive. You can think how the organization is from most powerful to less powerful but this is tactical game and each type of unit is used for one purpose, you can choose several Battlestars with any support or escort ship and you will discover how the enemy will break your neck when less you wait

The skirmiss combat is different from the campaign combat at one point, the difficulty, at skirmiss there are not levels, in the campaign, you can choose between easy, normal and hard. By this reason if you start the skirmiss mode selecting a enemy with a big and powerful fleet, you will be discover how it can defeat you easily. I recomend you to start with some easy.

Amount of points is limited as I said before and it is the unique set added for difficult the singleplayer skirmiss rules are shared with the multiplayer mode.

You can choose between different space maps, select your side, Humans or Cylons, select the composition from your fleet and the enemy fleet, there are defaults and to star the battle. All very simple but complex, without too many useless clicks or options.

At battle, you find a by turns game, where you can give several type of orders and when you click the end of turn, you will see 10 seconds of action. Additionally, you can pause the action with the space key. But you can not give orders, just stop the action. When the action finish, it starts the next turn and you can give new orders, analize all the battle and to find the best way where you can defeat the enemy.

The amount of controls are very good, you can control everything with the mouse, change direction, height, the turn angles are changed when the ship makes a turn. You can select all the type of weapons added at each unit. The targeting controls have a simple way and a complex way where you can select targets for the turrets in the unit from each side. Realize repairs or to change the posture from the unit are other of the options.

As you can see in the video, the enemy give me a more than enough good combat. This game is very fun and you can be playing it many hours without get tired.

Well, now you know the skirmiss mode, however for me at least, the most fun part from this game, it is the campaign. It adds a complete story in the BSG universe with the first Cylon war with several story missions, additional special missions and additional raids which you can fight at every planet. Yes every planet because the game adds for the campaign a complete galactic map from the 12 colonies space.

For show you how it works, I have started previously started campaign from me. I do not want to add too spoilers. The campaign adds in the begining a optional tutorial which it will help a lot to the new players. Of course, there is a very good introduction video to the story.

When you load a savegame or battle, you will see a background image like this and different text about the BSG story. 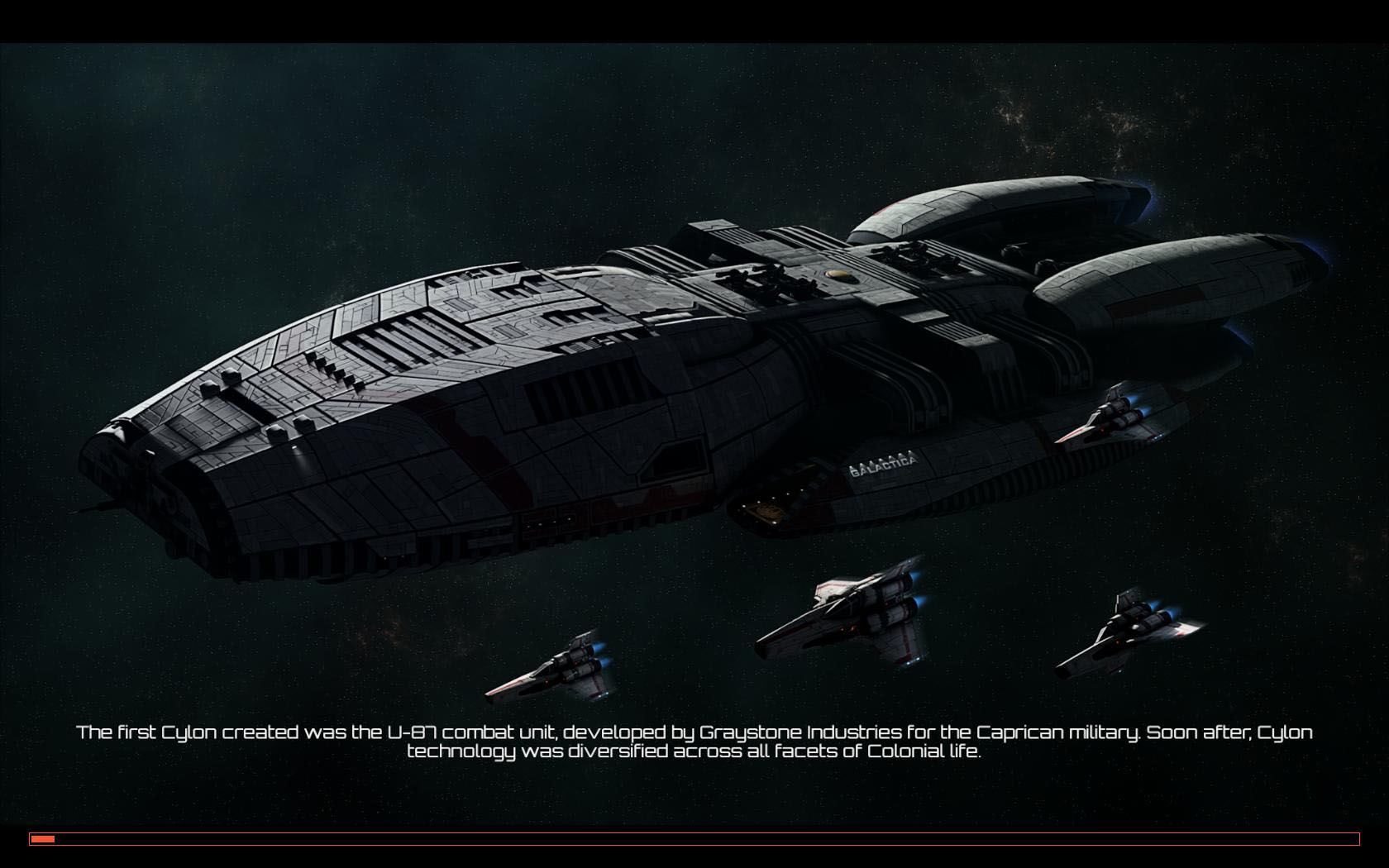 This is the 12 colonies galactic map. It adds even several additional locations. You start controlling a movile shipyard named Daidalos and two Manticore corvettes. At this savegame, I have a bigger fleet with 5 Adamant and 1 Manticore plus the Daidalos shipyard. The Daidalos can jump but you can not move in battles. However, it has defense turrets and it can spawn two fighter squadrons. There is a 7 ships limit per fleet.

This galactic map showed in a table, it is as the command center from the Daidalos where you control several screens more, everything at 3D. You can give jump orders, look planets and more. With the mouse, you can change your view. 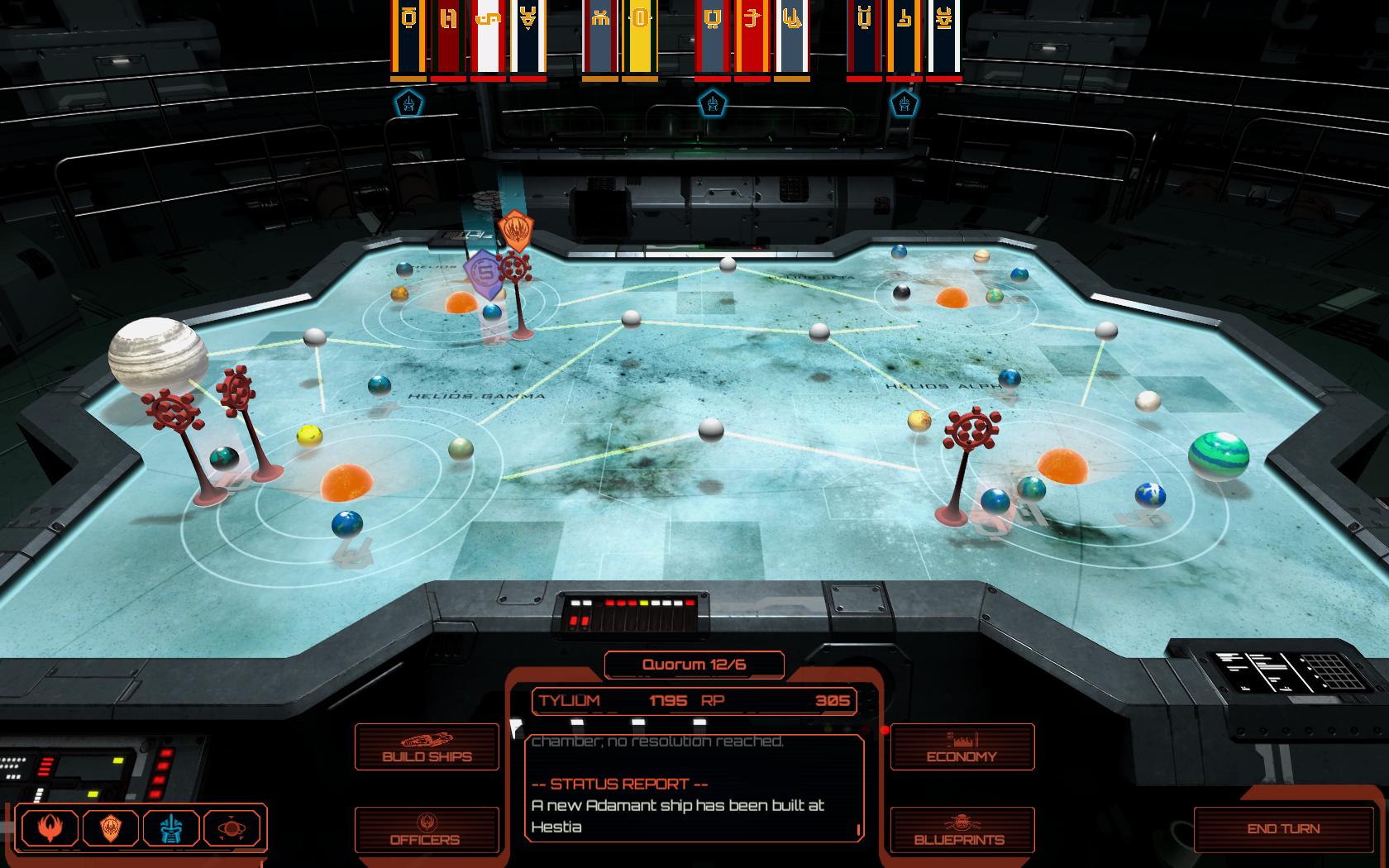 Additionally, you can build more fleets. I do not know if there is a limit in the amount of fleets, but it was thought for to build a fleet for each planet because when you protect planets with fleets, you get more resources. The economy screen tell you about how many resources get each turn. 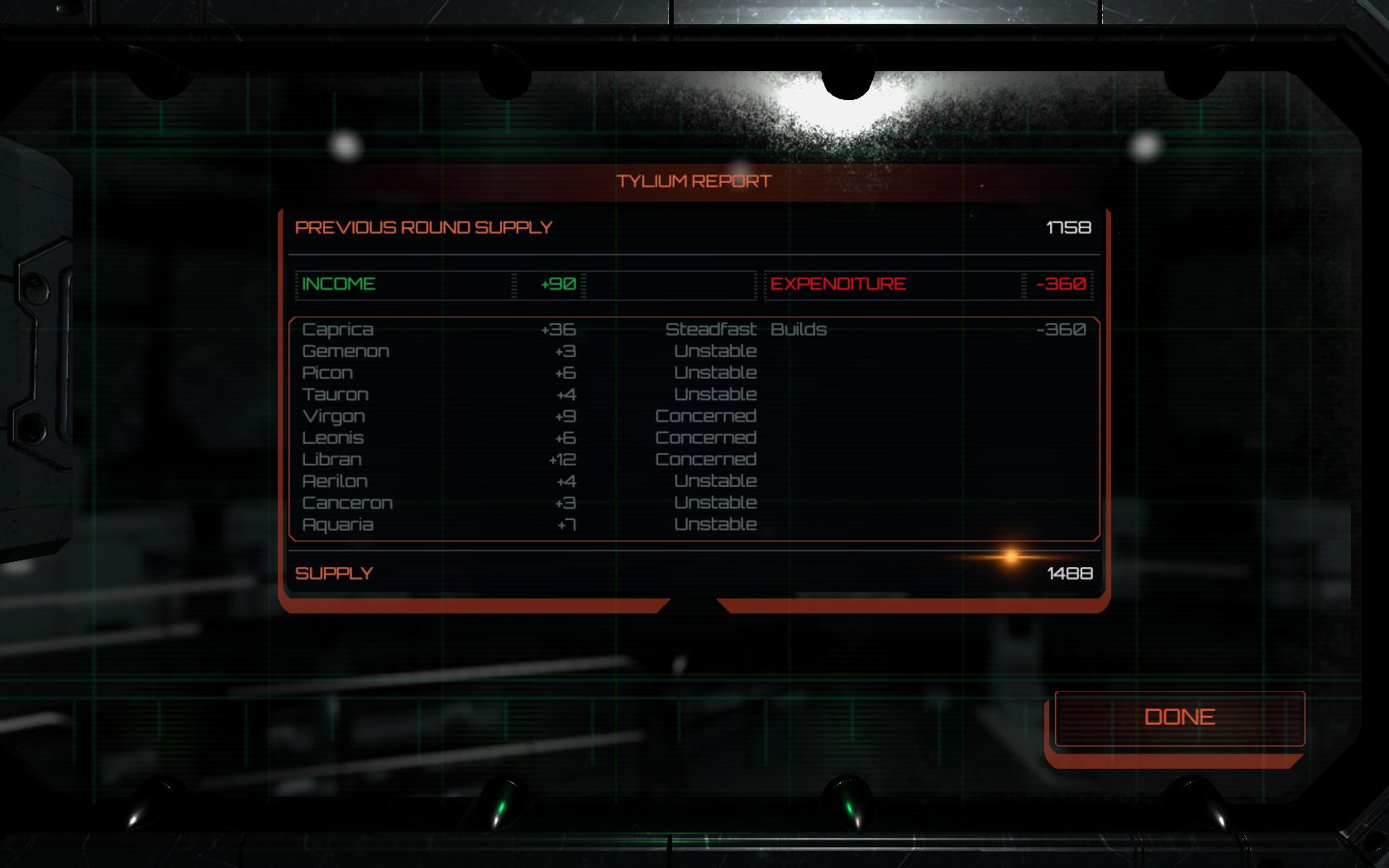 The main resource from the game is the Tylium, with it, you can build ships by example. Additionally, you can get requisition points which you will need recruiting officers, promoting your officers and buying additional technology. These points are get when you play the missions from the story (orange shield) or the special missions (purple shield).

In the Blueprints screen you can see and unlock the different new technology, when you complete more story missions, you will get access to new tech.

You can unlock small capital ships, battlestars, weapons and fighters. More than enough for complete the campaign with a lot of fun. 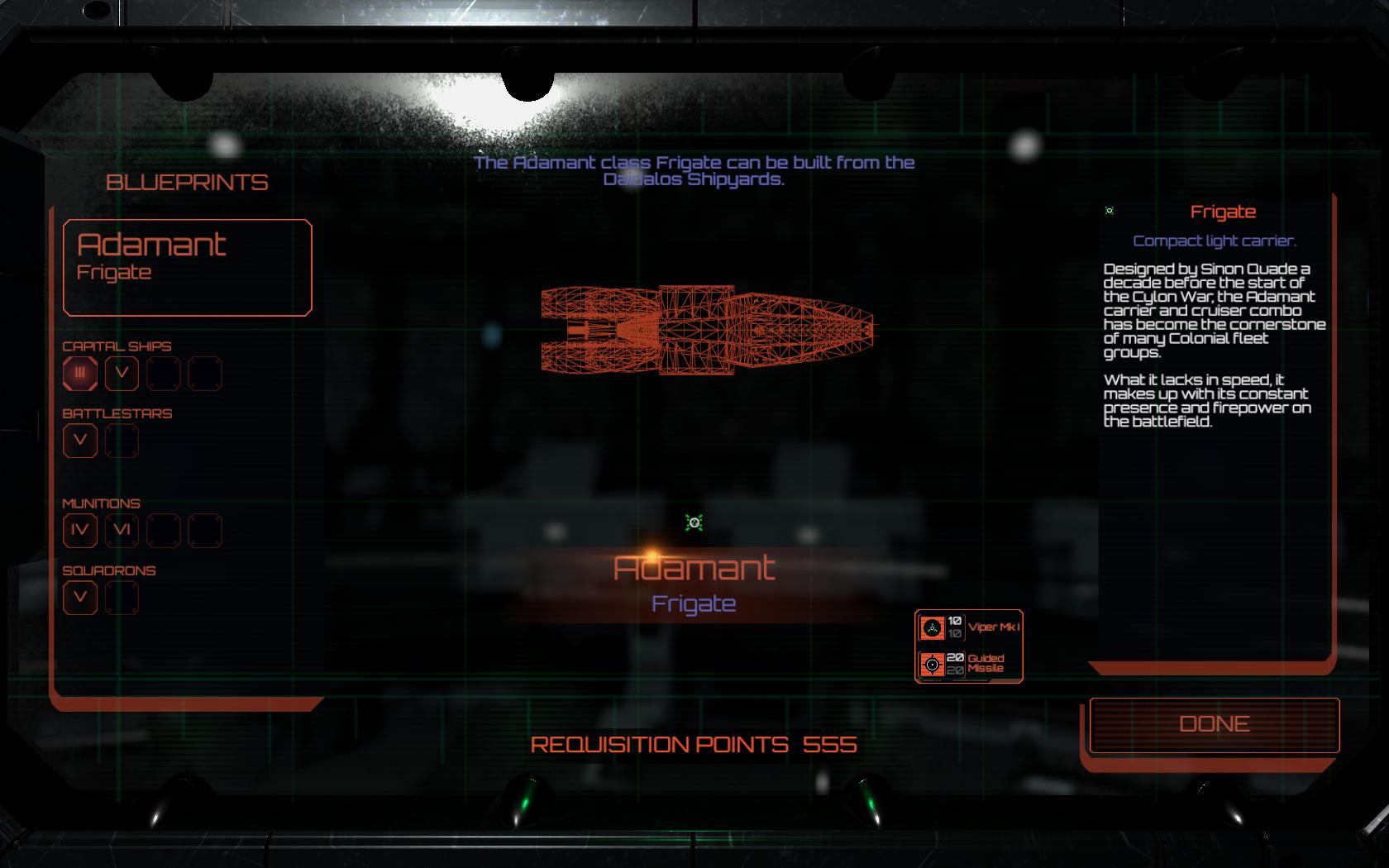 The Officers screen. You can recruit new officers and promote them. Officers are not avaiable in the begining. The main feature from them is command more units and only with them you can assembly a fleet with the maximun amount of ships. Each type of ship has a cost of fleet points. You can see them selecting the unit by example in the galactic map. 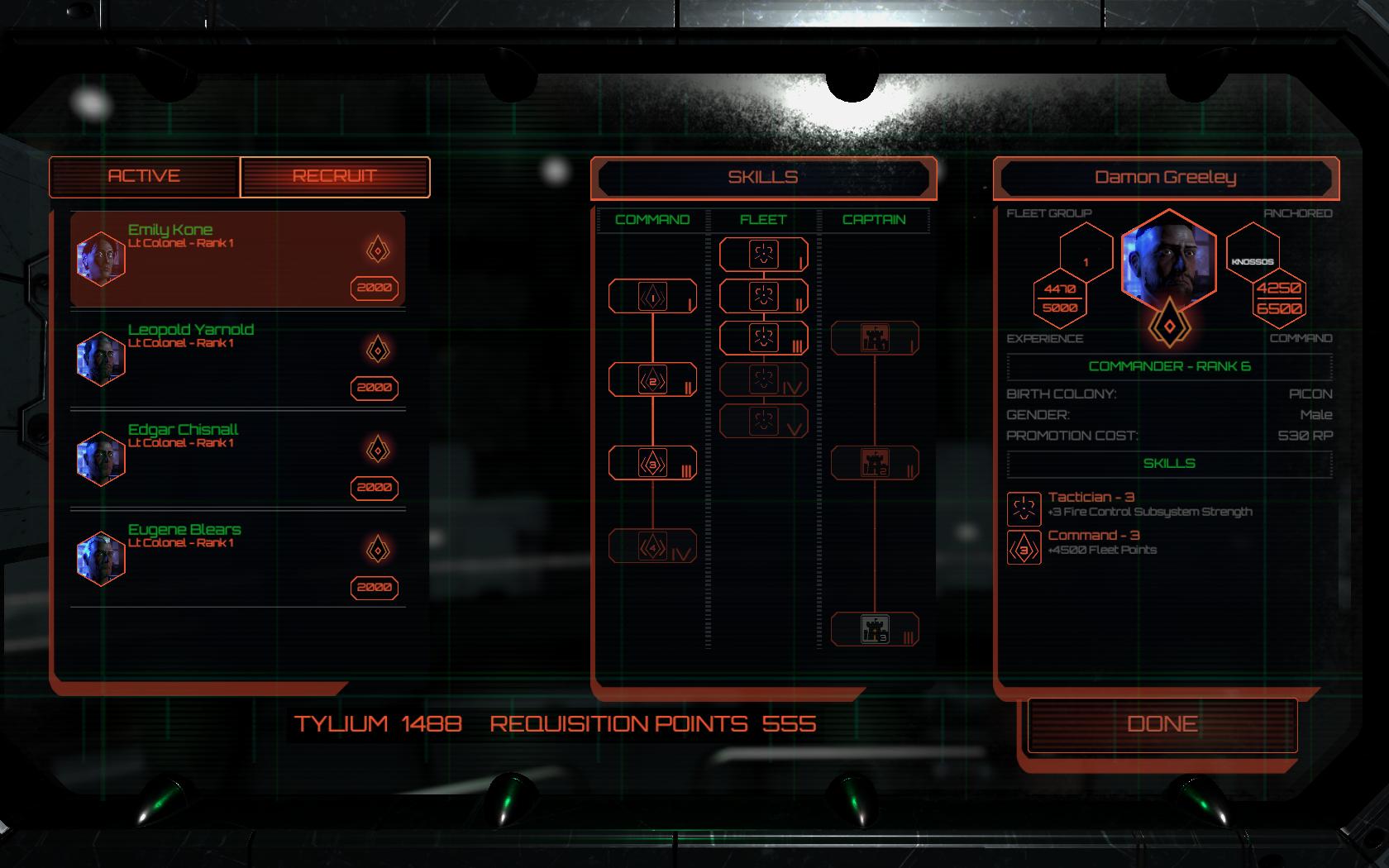 This is the build ships screen. Very detailed with the data about each unlocked unit. You do not need to build fighters, you select them before the battles and your loses are replaced automatically. You can increase the building times increasing the amount of Tylium. 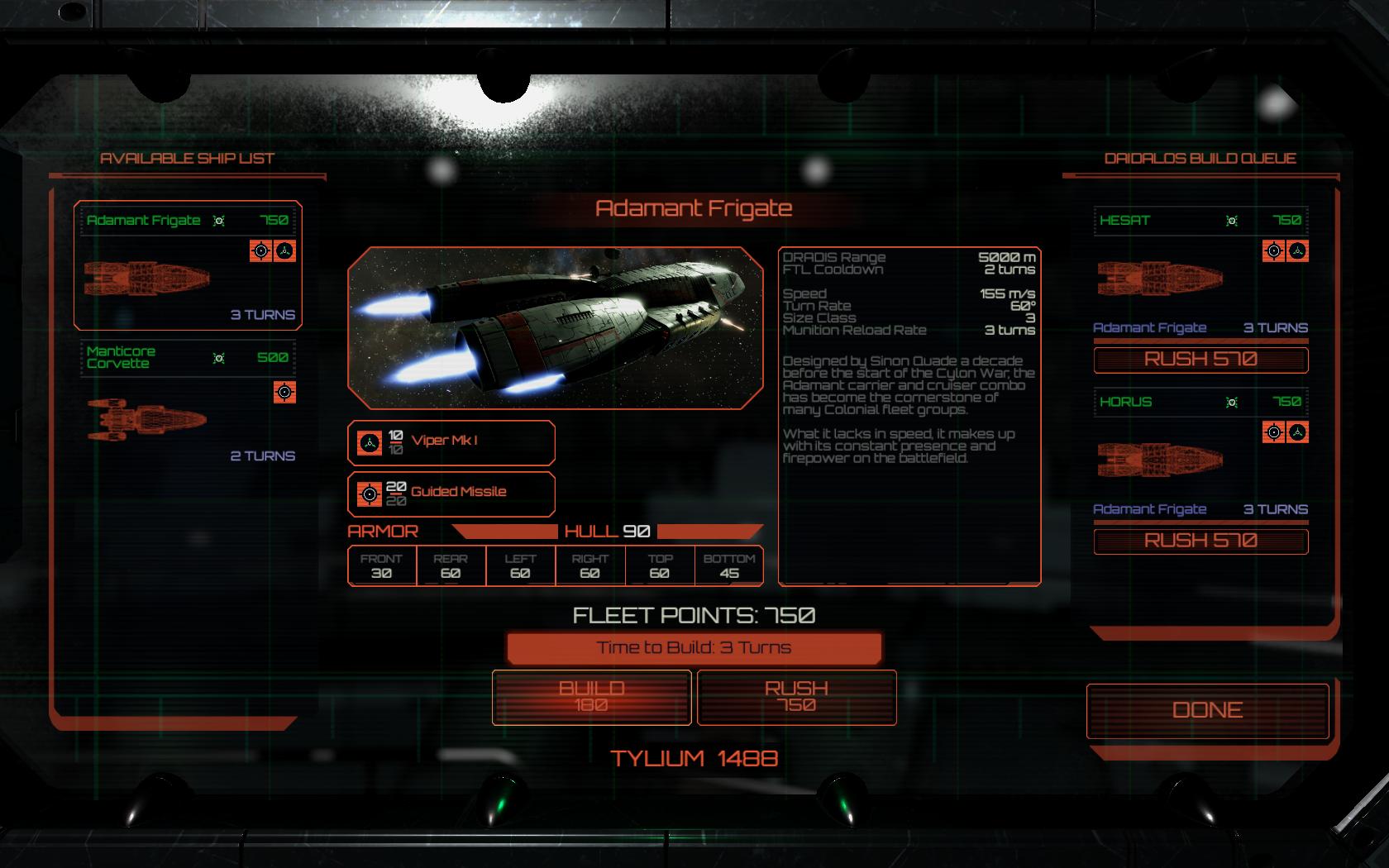 There is a screen where you can know all the details about each mission. Your assistant officer will give you the orders. The game adds voices for these events. There are several characters following the story events. All very canon according the BSG story. If you have followed the tv series, you will recognize the names. 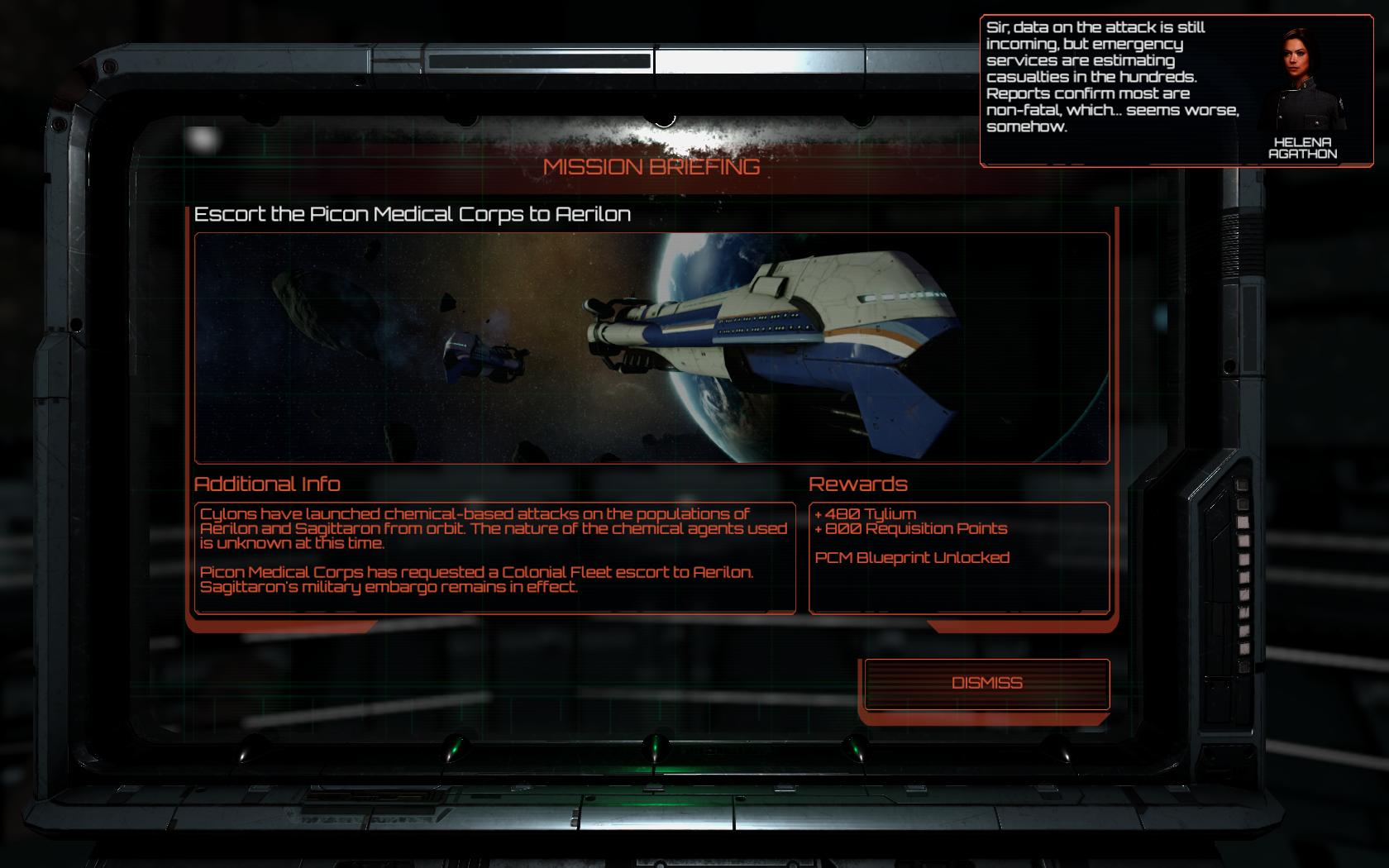 Additionally, if a fleet (a single ship can be a fleet) from you is in the same orbit than a Cylon fleet (clearly showed with these pink icons), your fleet can fight with it. If you have a officer in the fleet, you can play the battle, if not, it will be auto-resolved.

The auto-resolve option can be showed optionally always than the combat is without the Daidalos fleet or even with other fleet with a officer commanding it.

Other good option is how you must not play missions with the Daidalos. You can put it in the orbit of Ragnar where probably Cylons will not attack you and you can build other fleet for to play the missions. At few words, you can use the Daidalos only as a shipyard.

When you have administrated the neccesary things, you can click the end turn and everything will advance in time. Your ships will jump if you gave the order, the ships at construction will be completed or they will reduce their building times, resources will change and ofcourse the enemy will make its movements.

As you can see, the strategy part from this game is huge. You can make a lot of things and to play a lot of hours without get bored. The three additional difficulty levels, easy, normal and hard will give you more than enough options of gameplay.

I have recorded a video showing the previous features told from the campaign. The video has some subtitles with comments about it. However, this game is very intuitive and you read the previous description about the campaign, you will understand without problems what you see in the video.

The game will be released on August 31, you can buy it at Steam or Slitherine stores Battlestar Galactica Deadlock

About computer performance, if there is not any change, the game has these minimun requeriments.

About the videos recorded, I have played with this computer.

And for your information, I can play without problems at my old computer.

(An important consideration from this preview. It was made with a beta and it is not the final game. Somethings can be different.)

Thanks to Slitherine/Black Lag games by let me publish it.