Though this update took a lot longer than usual I do also have a lot more to show you all this update. Ranging from new models and new ideas to reworked models and ideas.

Though this update took a lot longer than usual I do also have a lot more to show you all this update. Ranging from new models and new ideas to reworked models and ideas.

First off let's start by going back to my previous update. In it I asked which model people liked the least and after a whole lot of comments I decided on redoing the Slipspace monitoring station, the Prowler and the Serric Frigate. I have already started making two different ideas for a new Slipspace monitoring station. Please let me know which one you like best or if I should start making something new altogether. 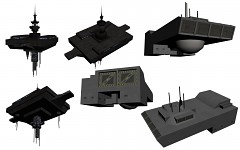 I also reworked the Pelican so that it looks a little better than before. Mind you, it's still a low poly model as it'll only be a really tiny shuttle. 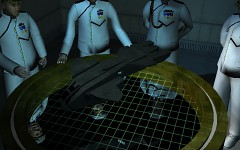 Now that we've handled all the reworked stuff, let's move on to the new stuff. For starters we have a couple of civilian freighters. Designed to transport goods from one planet to another the Laden and Parabola were the main freighter models used during the time of the UNSC-Covenant war. 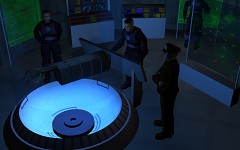 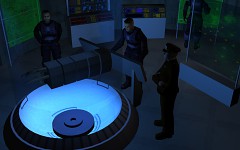 The next model will be a campaign-only object. It's the CRU class Prototype. Its construction was ordered by the council in secrecy and was kept from the Hierarchs. Why? You'll have to wait to find out. Its design was later reworked to the CAR class Carrier. 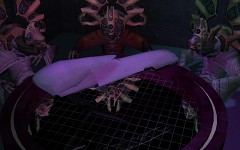 Now I'm sure that people that read this will know that not too long ago Halo: Reach hit the stores. In it, we're shown several new and even an old reworked idea. Since I know people are bound to start asking this;
- After thinking about it, I have decided to not include the Sabre unless people really, really want me to put it in.
- I will include the new Covenant Corvette model, though I'm not sure if it'll be exactly the same due to my dislike of the ring underneath the ship. (I might leave the ring out of it still looks good then)

Besides these two things, there is one more thing that I'd like to have your opinion on. Which style of ship should I continue in? The one we already know, the lone Battlecruiser Pillar of Autumn that managed to survive long enough for its crew to safely land on Halo, or the new style shown in Halo: Reach, the Warship Pillar of Autumn that decimated the entire Covenant armada with ease. It just looks way too powerful to be an old refitted cruiser in Reach in my opinion. But its your call.

Now, I hope that this update has satisfied all of you for a while. For the next update I'm going to be focused more on creating a few more Covenant ships as well as trying to get things going a little faster with that trailer I mentioned before.

Have you ever read the books?? It states in the books that the Pillar of Autumn was specially refitted for the spartans use in their mission to capture a Covenant vessel, as such it was refitted with Highly experimental technology in order to fulfill it's mission. One of those improvements was special collectors fitted to the MAC Cannon to collect excess energy from it's firing, allowing the Pillar of Autumn's MAC to fire 3 rounds in a row. Usually it takes 3 ships firing their MACs to kill a Covenant vessel, Meaning the Pillar of Autumn could take out a Covenant ship in one volley....
(not to mention the doubling of it's archer missile launcher, and newer better PD guns, and the fact it had a SECOND AI onboard (Inactive at the time the Covenant attacked Reach).....)

railgunners right the pillar was the cutting edge of UNSC tech at the time thanks to the refits, and the reach model does justice to its spec aswell as its orginal mission

Agreed, the ship itself along with its type was old but had been chosen because its structure meant it could survive plasma blasts much better than another UNSC vessel, it was upgraded to the best humans had to offer at that time. Its original mission would have ultimately led to humans using plasma tech and shields on their ships if the mission succeded, and really if you have the opportunity for that then you throw everything youve got into one basket (or in this case, ship). The Reach version shows what it should have looked like in CE.

I've read all the books yeah, and I do suppose you have a valid point, its just that I think they took a very different direction with the new version. And I know about all the refit-options that were done, its just that I think its a bit too much model-wise. To me, its like putting missile launchers on a WWII-era ship, the main model would still be a little old.

But this is just my opinion :P Judging by all the reactions I've had so far, it seems I stand alone in this.

Well technically they did attach a missile launcher onto a WWII-era ship. IE: USS Missouri. but that is here nor there.