Hey Everyone! I know it has been a ridiculously long time since my last post. Kurt and I both got super busy including both moving. However, now we are back in action and kicking butt again. This latest build is again heavily focused on the event and questing systems in the game. We are pushing to get to the place where we can start forming the actual story line in the game in a playable fashion. So, if you want to skip all the talk and just see for yourself, the here is the link to the build...

Hey Everyone! I know it has been a ridiculously long time since my last post. Kurt and I both got super busy including both moving. However, now we are back in action and kicking butt again. This latest build is again heavily focused on the event and questing systems in the game. We are pushing to get to the place where we can start forming the actual story line in the game in a playable fashion. So, if you want to skip all the talk and just see for yourself, the here is the link to the build...

So before we dig into the changes to the event system I first want to highlight one other change that I made. Last post I showed the dynamic lighting that I had added. However, I swapped that out for a 2D lighting system that I got from the unity asset store which I think looks WAY better. This new system allows me to have the 2D items block vision and cast shadows which looks really cool. I am really excited to start plugging in more lights to make the scenes more interesting to look at. Below you can see the new system in which the mast and barrels are partially blocking light. 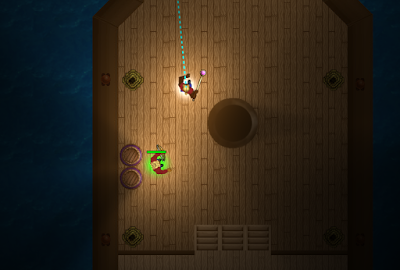 The rest of the changes in this release really focus on increasing the variety of events that we can script as well as the kinds of quest chains that are there. Many of these changes aren't things that you will readily notice in the build, but they are important infrastructure to allow adding events and scenes quickly. One example is that I changed the island generation to no longer happen at run time. Instead, I am randomly generating the islands in unity and then saving a collection of my favorite ones. Then, each of these I can manually tweak to make sure that they will look good (eventually) and that they have markers in them which can be used for adding event content to them. This also allows me to slice up the islands into some different ways. For instance, there are now events that happen on the shore of islands, so you cannot navigate the whole island but instead are limited to the section of the shore that is interesting for the event. As I said, most of the work here is behind the scenes, but it is setting the stage for what is to come. 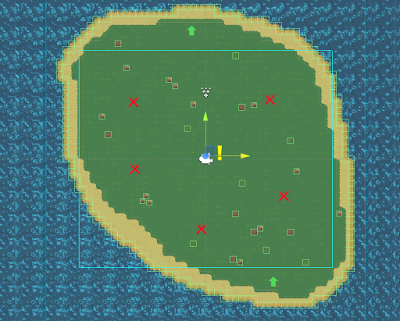 Editing an island prop in Unity

Beyond changing how props are pieced together for each event in the scene I have also added a new concept of branches to the events. This allows each event to have an arbitrary number of locations in it. An example of this is that you can now visit an island and then find and enter a cave on that island. This really expands the variety of things we can do to spice up the events and make them more dynamic. Using this system I can also place random objectives into events. For instance, finding a chest at the back of a cave that you decided to explore (watch out for ghosts!). 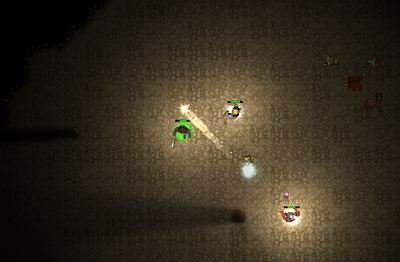 Looting a chest in a cave

Kurt is also back into high gear pumping out new assets for us. There are a bunch of new icons and islands which have been added into the sailing scene that look WAY nicer than the place holders. Also, the ship and locations icons have been sized down to look much better. Beyond that, there are a bunch of new bits a pieces on the ships to spice up their look. 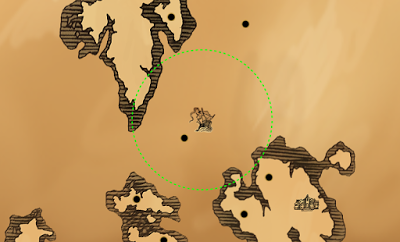 Another massive undertaking that was made in this build is to really finalize the saving functionality. You can now save and resume in the middle of an event without losing any progress. This is of course a critical functionality of the game, but I had been putting off implementing it because of how much work it was. It feels good to have it working now though! One interesting thing that happened was that the save game sizes were too large for the web player (it only allows 1 MB). However, I was able to plug in compression and bring them down to about 100 KB. This took a bunch of extra work, but now the saves are nice and small in size.

I am also really excited to announce that we are going to try and get into the Seattle Indies Expo (SIX). Seattle has a super awesome indie game dev scene and we are going to try and break our way in. Submissions are due at the start of July, so we are rushing to prep one more build of changes before we put in our application. As a result, you can expect a bunch more work from us to spice up the events and to add more visual variety in the next month.

Thanks everyone for reading! Please play the build and leave your ideas and feedback in the comments. We really love to hear peoples opinions on the direction of the game so far. Below is the slimmed down change list for this build...

---- v0.13 ----
- Refactor dynamic lighting. Now includes shadows and other effects.
- Refactor how props in events are managed for scalability
- Add new shore props used in events
- Add infrastructure for event chains to complete based on item collection
- Add new elven islands event chain
- Add elf character type
- Make docks come off of an island
- Refactor scene manager to allowing travelling to a larger variety of locations
- Add inside of the ship location
- Add caves which can be found during events
- Add chests which dump out loot as event objectives
- Add event branches which are used for greater event variety
- Events can now be saved in progress (this was a huge effort!)
- Add conditional event options (such as costing gold)
- New sprites for the map
- Compress the save files to save on space