Atomic Society is a post-apocalyptic town building game with moral/ethical choices. Our 24th monthly dev blog covers all the latest features and goings-on as we put the game together. 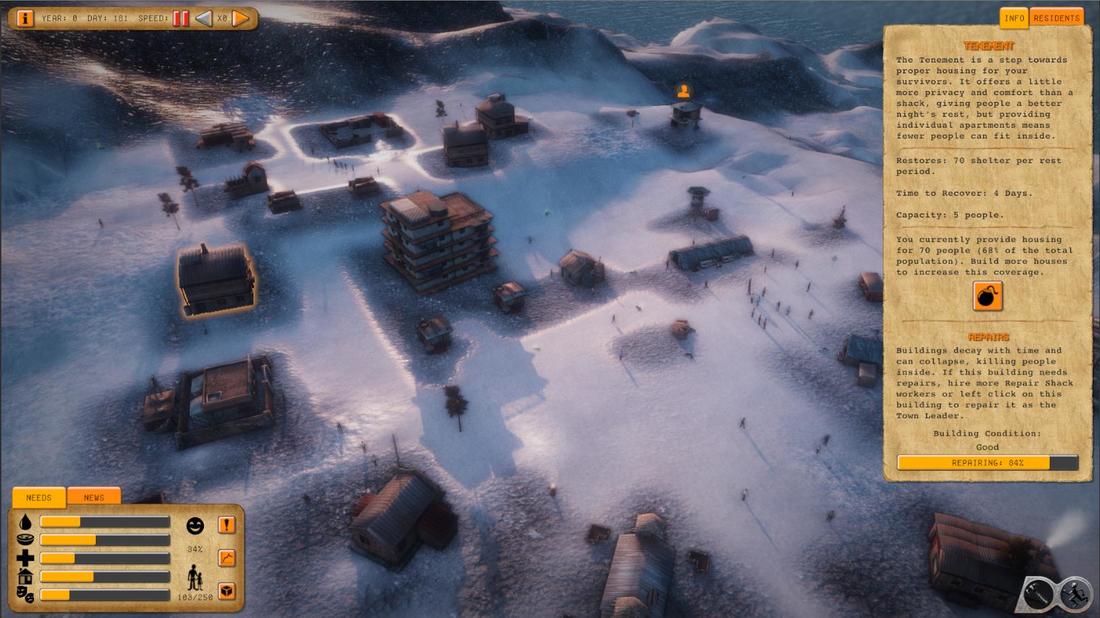 In this, the 24th monthly dev blog since starting this project (yay to me writing for these reports for 2 years!) we'll look at the last steps to finishing version 0.0.8, which might turn out to the penultimate version before Steam.

​Not surprisingly, 0.0.8 is taking longer than we hoped for! Redoing the pathfinding and construction systems from scratch is turning out to be another one of those “oh, didn’t expect this to be such a insanely complicated thing!” situation. Long-time readers of these blogs will know this happens occasionally making this game. It all works out in the end. On the plus side, I am reasonably confident that when you try the new version you won't ever want to go back to the old one.

​0.0.8 will now come with not one but two new maps for players to create towns on. The extra time in development gave me the chance to go for it. That means that in 0.0.8 all the maps will be in the game to enjoy at last. No more “coming soon” icons!

The 9th and final map to join the game is called Summit and is set on the side of a moody, frozen mountain. This map has an ominous mood. The survivors must’ve been pretty desperate to call this home. At the moment I’ve made it very misty as the mountains look best hidden by fog.

Thanks to Nani, this map comes with its own brand new convertible ruined ski lodge and broken chair lifts you can use. The tourists don’t need it anymore so why don’t you take it over? Summit joins Valley as the new maps available in 0.0.8. 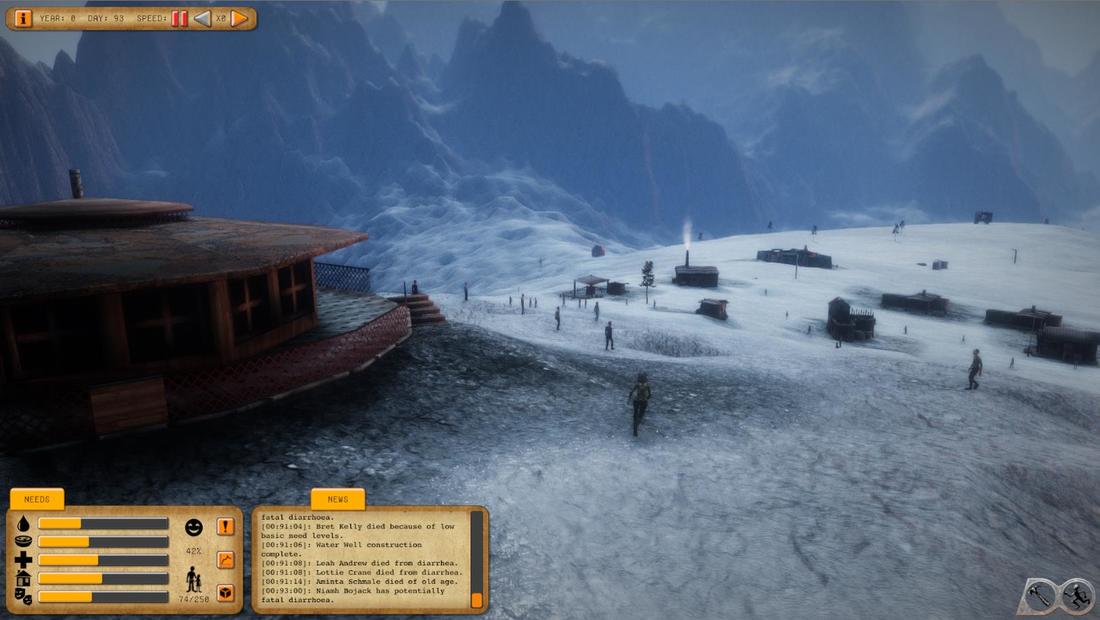 My current plan is to leave it at 9 maps for now and add more random elements to each of them so they're different and surprising each time you play them. I'd rather make the game with a handful of lovingly crafted maps you can master than to create endless generic random ones, especially as most people will probably only make a few towns. I think when we've got more features in the game we can start to add modifiers to each map, for example, reduced water production on desert maps, etc. I don't want to punish people though for picking the climate they like though.

0.0.8 will also come with some other improvements to all maps as well. New ruins have been added, bugs have been fixed, and all maps now have procedural sky boxes which really tap into Unity's advanced lighting system. On top of that we have also upgraded the water in the game, which looks far, far better and runs better too. These are some of the perks we can afford thanks to our pre-alpha customers funding us. On top of that, I finally have time to start tweaking and perfecting the maps instead of creating new ones. There are about 45+ different places you can spawn in Atomic Society overall, so balancing all of them as one designer takes some time! Perhaps your favourite spawn point will be more fun this version!

Despite this being one of the core tasks that is holding up 0.0.8, I can't say too much about the new animation system quite yet as it is still mid-construction. Nick is spending all his time on this, getting it perfect. What I have however seen looks vastly better than previous versions. We have upgraded all the citizens to a physics-based, organic animation system (IK), which lets them move with realistic weight and body-mass, and adjust their footing appropriately to the terrain. We tried to do this ages ago but had to roll back as it was beyond us. Well, we've levelled up as devs since then and now know how to pull it off (he says nervously, a few weeks away from release!)

Right now there are still a lot of bugs to solve though, but we're making progress. Making a city-building game with a third-person controllable character is double the work (don't do it fellow devs, though I wouldn't change it)! At time of writing we're battling problems with the Town Leader acting like she has lost her spine and Engineers teleporting halfway across the map whenever they finish building something. There's going to be a ton of perfecting to do with this but I'm hoping that when it's done, it's done...

As for the new construction system and pathfinding AI improvements (the other 2 core upgrades to 0.0.8) they're also a little hard to talk about, as they're also work in progresses. What I have seen however looks awesome. The pathfinding fixes are subtle but fix the most annoying bugs. And the new construction system alone is a dream. Scenery now deforms in real-time as you place a building, and it makes perfect sense where you can and can't place a building, there's new animations when you do build something too, and it feels 100x times better. Nick's labours are definitely paying off here. Building stuff is the core of Atomic Society and in 0.0.8 that core element will feel a lot more fun. I just want to put buildings down for kicks in 0.0.8, as you'll see when it's out.

This month Adam has been really busy doing a ton of little upgrades that all add up to make the game feel a lot better. I've been chucking lots of tasks to him that I've wanted fixed for ages. The biggest one is that now the Town Leader can manually repair structures that are damaged and fix them manually. Useful when your repair shack workers are off fixing one thing while your storehouse is about to collapse!

In addition to that, whenever a building collapses, or if you manually demolish it, the ex-building now leaves a little mound of debris. Click on this and it tells you what the building used to be, and you can even salvage it as the Town Leader to get a few bonus resources back. You might even now choose to demolish structures to gain loot if you’re desperately short of something. 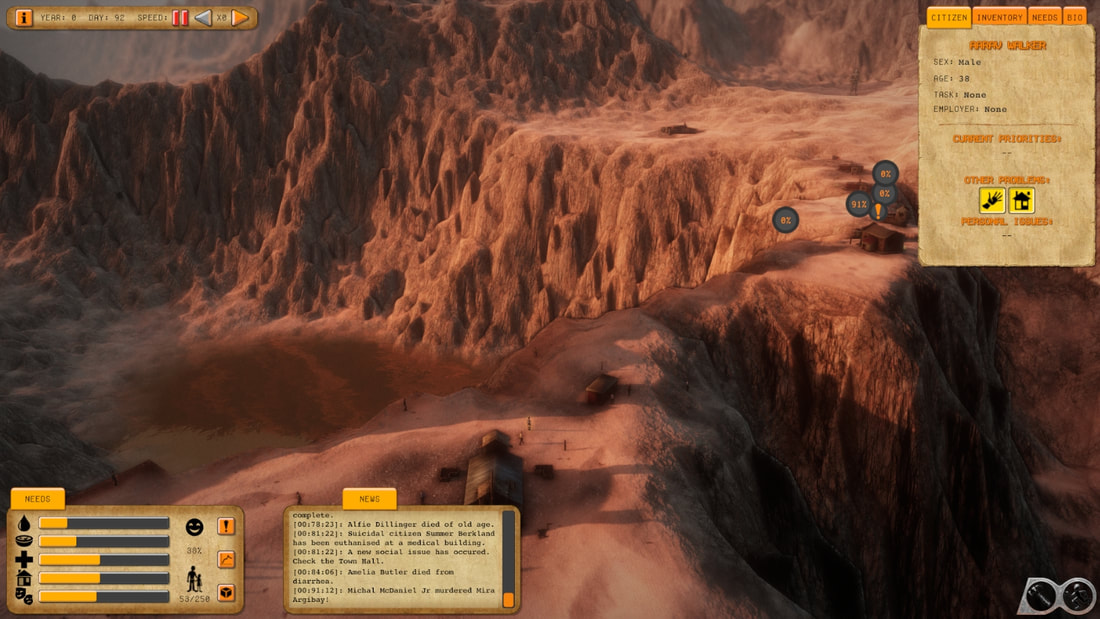 Without wanting to reveal the whole patch notes for the version here, (which are coming a soon as I feel more certain about what’s in them), here’s some of the other slightly interesting things coming in this new version… 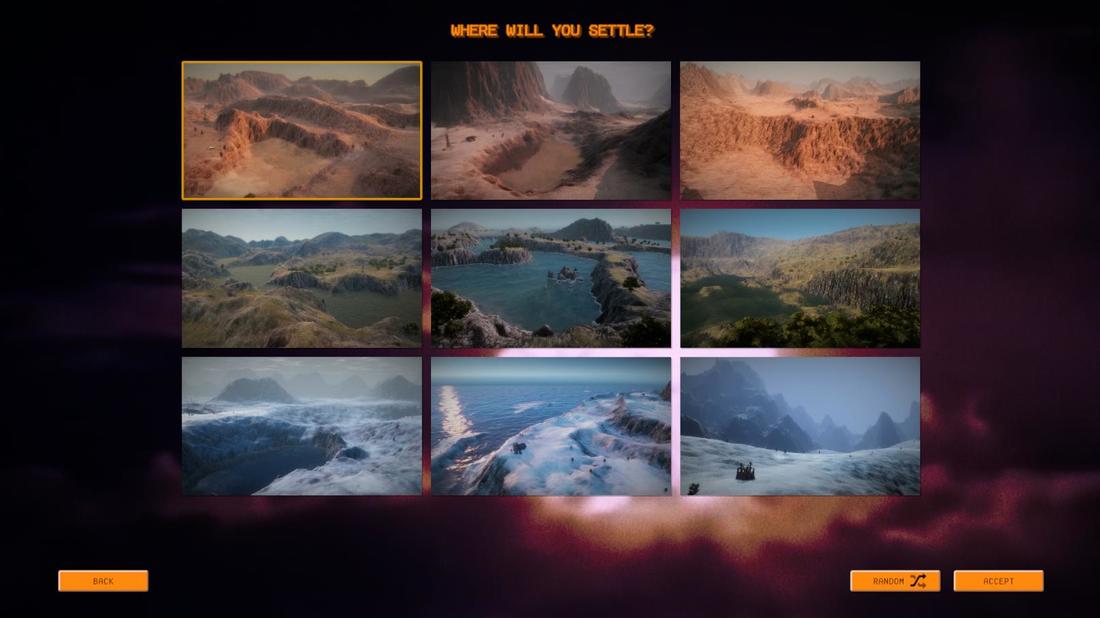 Adam has also been working on a tricky change that I wasn’t sure about. A few players disliked like how the camera in Atomic Society snapped to the Town Leader when you give him or her an order, and I can kind of see their point. We tried a few different approaches to solve this lately. For example, we temporarily changed it so that the camera never snapped to the leader at all. You simply ordered her about like a unit in an RTS game.

However, this change turned out to be a load of rubbish. It made the Town Leader feel like a tool, rather than a character. You were moving them about without any connection. It’s important that players get to see their town from a character’s height occasionally. However, because I’m probably in the minority here, we did find a happy compromise. It’s now that case (and all this can be toggled off in a new Interface section of the options) that the camera will break out of Town Leader mode whenever she enters a structure. This prevents you from accidentally interrupting her. On top of that, you can now deposit loot in the Storehouse in any mode, no camera snapping.

I will find out in the next Youtube videos whether I have made a terrible mistake here! 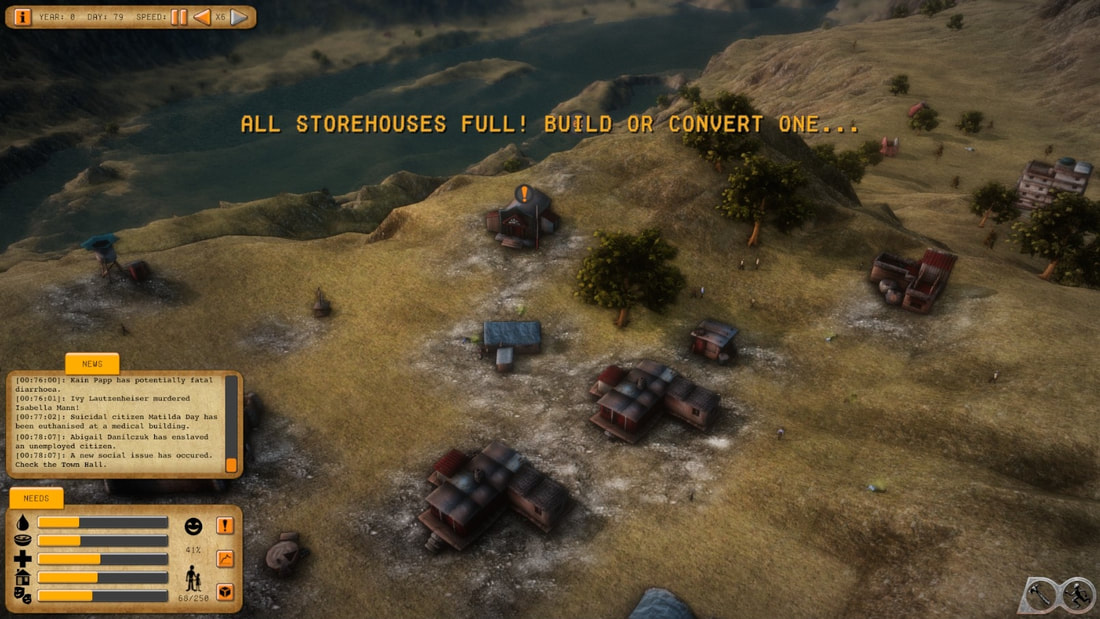 This and last month are still just a taste of what's coming in 0.0.8. It's not going to be a version that radically remakes the game or adds a new feature that changes everything, but it is shaping up to be a much-needed refinement of existing stuff. I don't expect any Youtube streams of this version because it's an evolution rather than a revolution, which is fine, as it gives us breathing space for the Steam release.

​I’m not quite sure when 0.0.8 will be out, perhaps sometime in November. After then it’s straight onto work on the final (!) pre-alpha version, aka 0.0.9. I can’t believe we’re almost ready to stop calling Atomic Society a "pre-alpha" and to move onto the next stage in the life adventure that started way back in Feb 2015. The end of 2017, or early next, is going to be the biggest shake-up to our lives since we first went public. As little indie devs working from home in our spare time after work, everything changes soon. It might not be a life-changing shake-up, but my life has been already been improved enough meeting my teammates and making this game.

Creation is its own reward. The more I make this game, the more I love making it (that hasn't changed). We're getting over the hard stuff slowly but surely, and it's proving to be a lot more fun expanding what exists. If I were looking for a game to play, this is the one I'd be after.

0.0.9 will be a smaller and slightly faster version (so let’s say 2.99 months instead of 3.0) and then it’s out onto the big world of Steam. I’d like to launch before Christmas but I think it’s more sensible to say we’ll be ready in January now. I’d love it to be faster but what game developer doesn’t? Thanks to all our pre-alpha players and players who are waiting. I hope you enjoy what's in store in 0.0.8.

I'll see you next month. 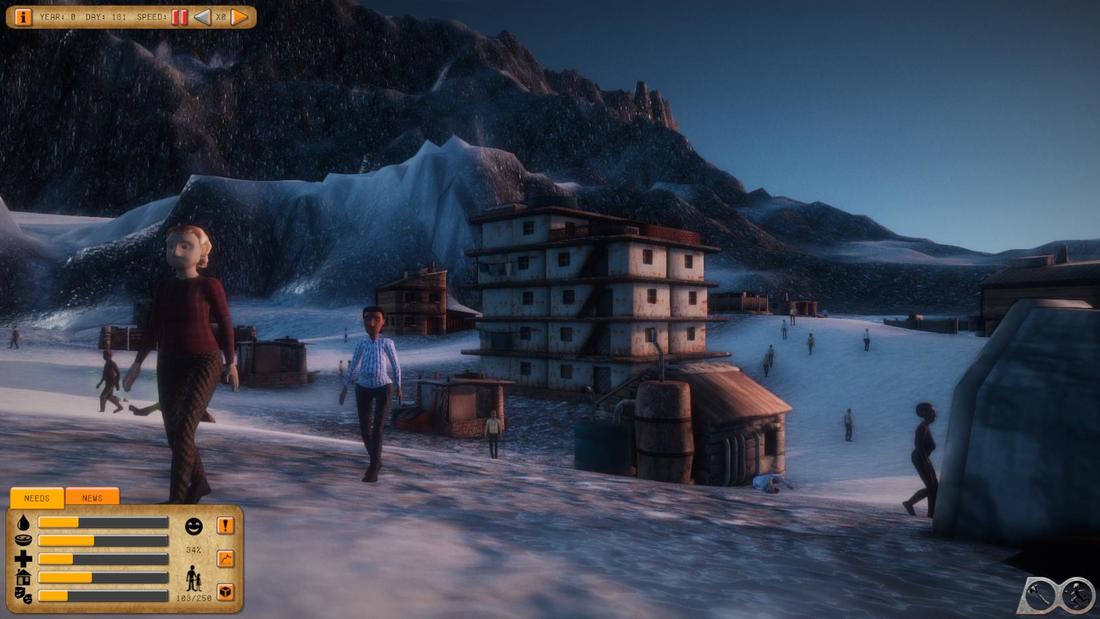 Can I just asked why shadows on buildings look so weird? I dont mean shadows casted by sun, but shader used on buildings in general, it seems so unclear and foggy to me, for example windows of a building in this picture : Farroadgames.com

Well spotted! That's a bug with the ambient occlusion at the moment. It won't look that murky when the version is out. (And the effect can be disabled entirely in video options if you don't like it at all.) :)