Welcome to today's modification update for the Assassination Mod, which is being created by Anarchy Productions. Today's update summarizes three items that have been posted on the Crymod forums, as well as an update on the previously shown "US Marine" character.

Welcome to today's modification update for the Assassination Mod, which is being created by Anarchy Productions. Today's update mainly performs as a summary update. Various assets and so forth which form part of the modification have been posted around the Crymod forums, denoted as an asset/level for the modification by the "[Assassination Mod]" text at the start of the thread title. Today's update summarizes three items that have been posted on the forums, as well as an update on the previously shown "US Marine" character.

US Marine Character
First up for today's update are two updated renders of the US Marine character that will feature in the modification, which show him posed in two different positions, and from two different angles, with our previously created and shown MP5A4 sub-machine gun. The model and texture are currently marked as completed, although further work may need to be performed at a later date. The model and texture have been created by team member Quillisia. 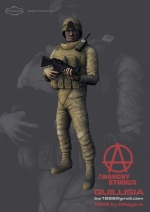 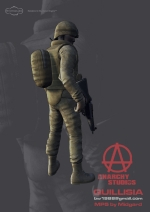 Bumper Car
Secondly for today's update, we have two renders of a Bumper Car prop for the Chernobyl/Pripyat level that is to be included with the modification. The renders are currently slightly outdated, with minor modifications and additions including modification of the proportions of the wheel and pedals, and the addition of a bent and mangled antenna/'wire' to the back. The Bumper Car was modelled and textured by team member glenatron.

Ice Level
Next up, we have some of the first progress on the mod's Snowy/Icy level to present to you here, which is being developed by new team member Nano.. The first two screenshots are currently outdated, where the third and final one shows the latest progress that has been made upon the level, including most noticeably ToD, fog, and other general atmosphere changes.

Russian Gasmask
As the last content item for today's update, we have a Russian gasmask that has been created for the Chernobyl/Pripyat level that is to be included with the modification. It is nearing completion, although it still requires tweaking for ingame use. The below screenshots showcase it attached to a standard NK model. Both the model and texture were created by team member Quillisia, and the model exported ingame by myself, callofduty511.

Recruitment Positions
The Assassination Mod is currently steadily moving along, although any new talented additions to the team are always welcome, with the current positions listed below being open. For more information on how to apply, be sure to check out the official recruitment thread, which is located here. If you are capable of something, but a position for it isn't listed, feel free to apply anyway and we'll be sure to consider your application.

That's all for today's Assassination Mod update, we hope you enjoyed it! If you have any questions, comments or feedback, be sure to leave them here for us in the official forum thread for the modification!

Great update guys!
Looking forward to this one :)

Woo bumper cars!
Since when did US Marines use MP5s? I thought only SEALS used them? Or at least Marines DIDN'T use them? Oh well looks great anyhow.

@flamingvipir
We're not going for an authentic experience, so the enemy will be using a variety of different weapons =) It's also slightly misleading titling the character as a marine; he's just heavily based upon one, it seemed an appropriate choice for the Desert level =P

I Didn't Believe anyone could make a good Crysis mod, Looks like your Proving me wrong.

evrythin looks good but the gas mask loks a bite lame it should look more like gas mask from chernobyl or somethin. And us marine hes legs are small but rest of body is too big, also face is to fat :/

The gasmask looks quite close to reference (http://image34.webshots.com/34/7/97/77/338279777OXuZnA_fs.jpg) and does not appear 'lame' to me =) Generally not worth it to re-do the entire thing as it really does look fine to me and I have not received any such crits. from anyone else.

As for the Marine, the proportions for the body itself cannot be changed if we are to use the standard Crysis SDK rig, as the Marine is built upon the proportions of the provided example character. The head however could use some improvement. If we can't get a desirable result for the head, we will be using the standard heads included with the game =)