More work on the arcade controller. More pics of it.

Hello, I did more work on the controller prototype today ^^

Ok, the photos you saw yesterday, the controller was not locked the parts, it was only "assembled" so I could see if they fit each other. Today it was time to start gluing the parts (we planned to use glue, as I mentioned in yesterday post). First we needed to make all wooden parts even, to do this we (I am saying we, because it was me and AGF co-owner, of the business software division) sanded the parts (sorry, no photos of that for now). Then we made small holes in the wood, inserter some wooden pins, and used that to lock some parts, as you can see on the picture. 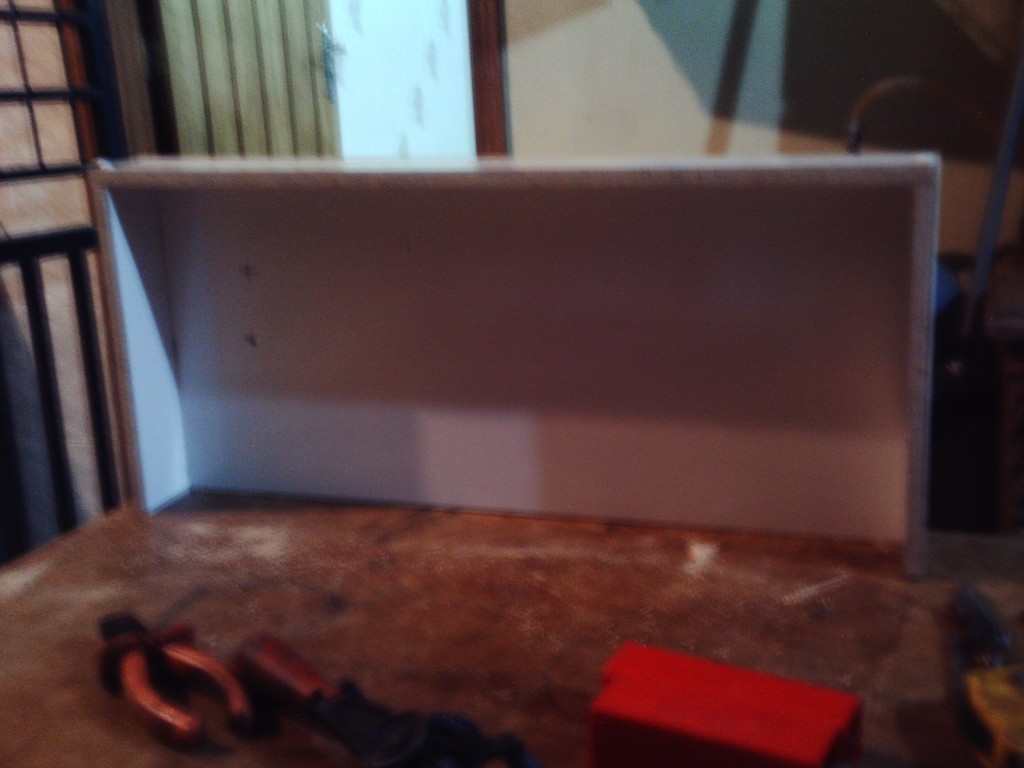 The box you are seeing here is the controller seen from the top, the side that has nothing is the "back" and will go against the arcade cabinet. And yes, the thing in the background of the photo IS a barred door, here in Brazil we lock themselves inside, and the bandits outside (instead of putting them in the prison... actually, we have prisons, but we have waaaay more people to put there than it fit... I wonder if someone can make a russian reversal about this fact :P).

Anyway, returning to our subject here, after the box was properly working, we fit the trackball, the usual mounting is using a metal plate on the top of the trackball, but I think it is very ugly to do that, as seen on this photo (note: this photo is not mine, I just grabbed a random photo on google to show what I mean) 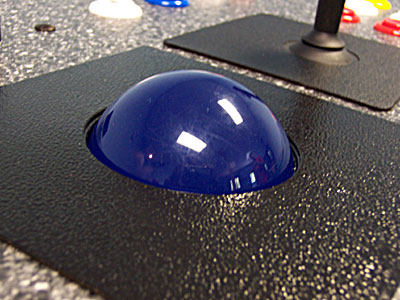 The reason people do this is because it is easier, the trackball has only some milimeters on the top side, meaning that it is almost impossible to fit it on regular wood unless you do some serious woodwork, since we are using a wood-like cardboard, there was no need, but then people would put the screws on the top (no need to show a pic here I think, just imagine a trackball and 4 screws being visible on the game board). But the trackball holes for screw actually has space to insert a nut nicely, and it happened that I had the exact size of nut for that holes :D 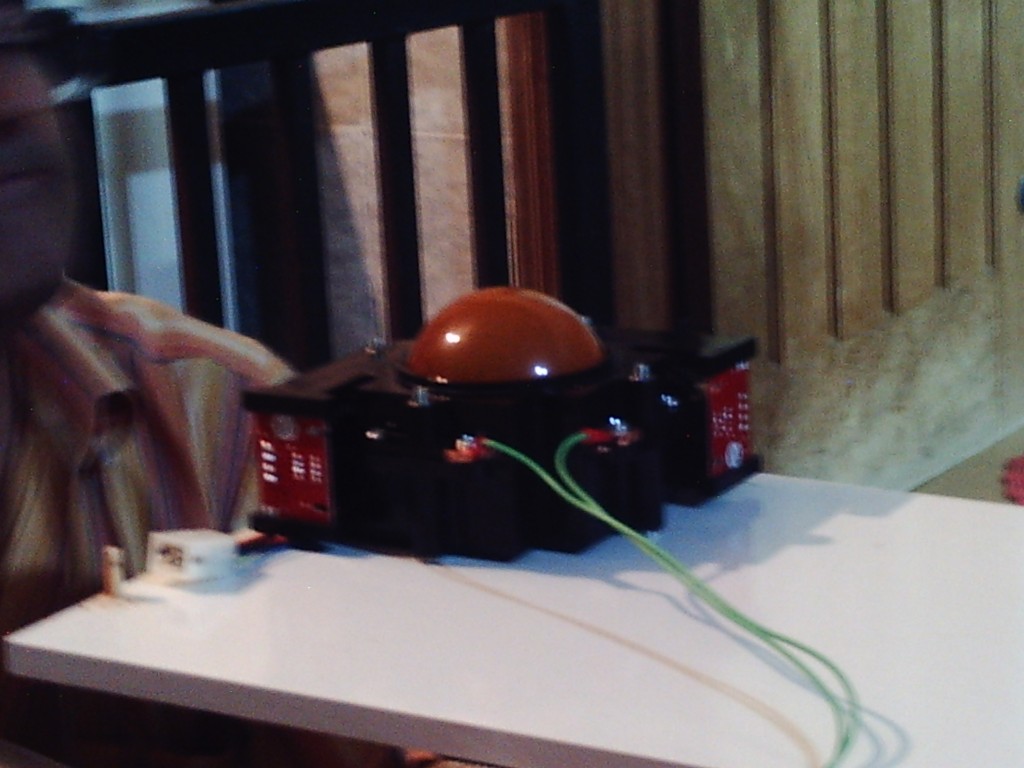 Now if you pay attention to the photo (sorry for the bad quality, taking photos at night without flash, and having shaky hands...), you will see the bolt is jutting out... It means that we actually made some calculations wrong. We tried fixing it by inserting several washers below the trackball, but it don't worked, because we ran out of washers... Until we noticed some old nylon washers that were just the size we needed (I dunno where they came from, it was from some other project), so we used the nylon washers, fixed the problem, and now we had the trackball fitted. Notice the boards seen on the first photo are not there anymore, is because we fitted them with wooden pins, on purpose, so we can remove this lower part (and the trackball) at will, to do maintenance (not that prototypes are supposed to need maintenance... but just in case).

Then we placed all the wooden planks back, and we figured we had a problem: Where we would place the wires? I then took the electronics to our woodworking bench, and stared at it a little, then we made some calculations, and finally the result was that we needed to make holes in the wooden planks. 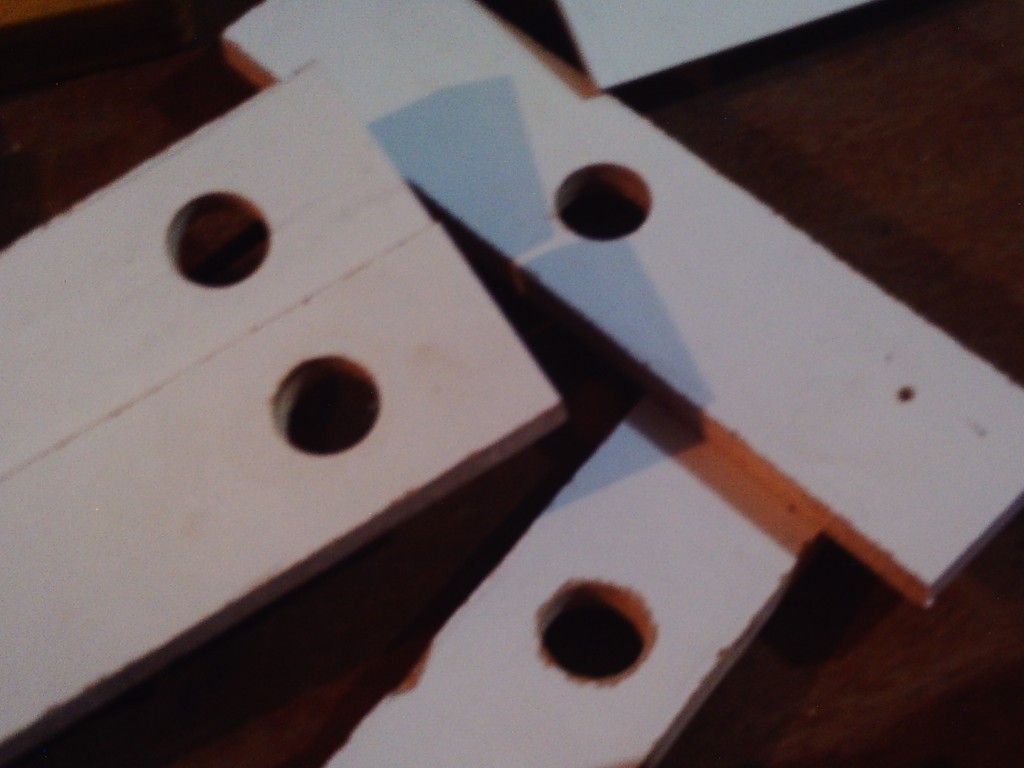 Now, planks with holes, time to fit them :D

But when we tried to fit them, we noticed another issue... We forgot to take in account the size of the microswitches (I will explain what they are in the part about electronics) when making our calculations, so, I took two microswitches, fitted to two fully assembled buttons to our panel, and made the test. 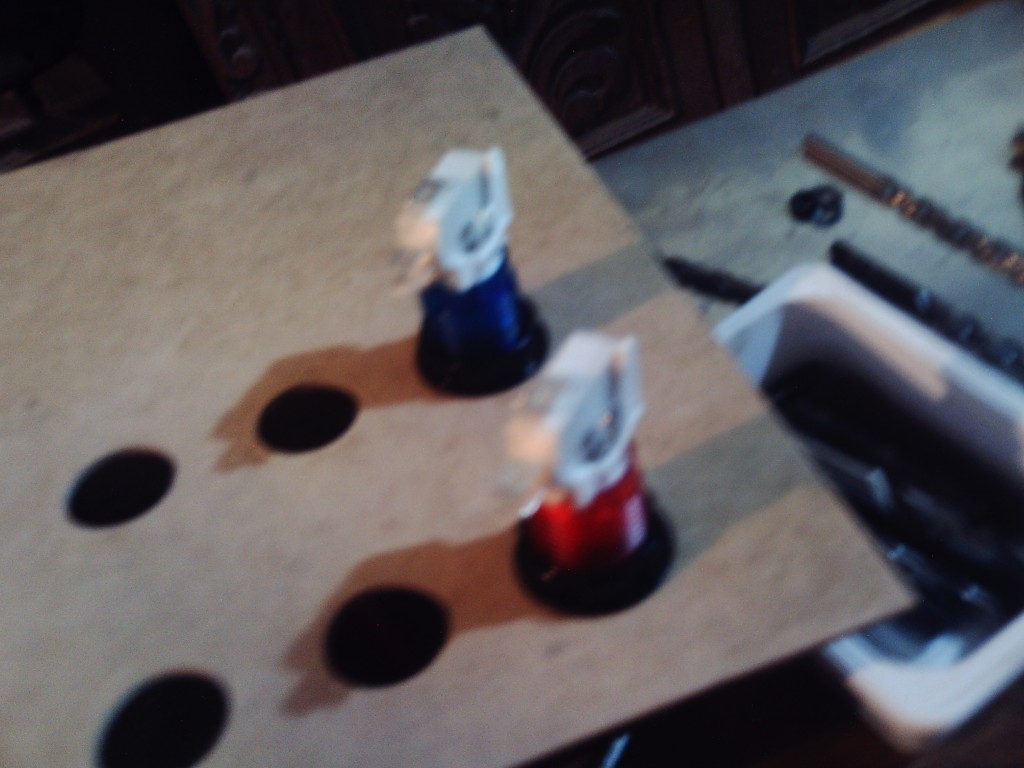 So, even in diagonal, and then taking account the wires (not in the pic), the thing was failure, the structural board did not gave sufficient room to the button. We needed something to give structure, yet not tall, and strong, the solution is a aluminium bar that we had (I need to mention AGF was a factory? we have all sort of stuff here, although for metal working, this our first time with wood).

But that is for tomorrow, it is night already, and time to eat here. Tomorrow probably I post about the fitting the parts (oh yes, I said we planned to use solely glue, but we realized, specially now that we will use aluminium, that it won't work, we need to buy screws...)