First part of the series showing the construction of the arcade cabinet controller.

So, the first thing in making a controller prototype is design the controller! One thing was obvious, the game needed a way to control the paddle, and another to activate powers, since there are 8 powers, I would need 8 buttons. On the PC originally the powers were activated by pressing 1 to 8 in the topmost row of the keyboard, but this really sucked, since it was REALLY easy to screwup and press a wrong button. I added another control method, that was using a block of 8 keys distributed in 4 columns and 2 rows (qwerasdf if you are wondering), and then I decided to use this same method on the arcade controller. So, the first thing after deciding the inputs, was make a basic design, this is the result (note, this is a PROTOTYPE design, the final design may be totally different)

So, as you can see I decided to use 8 buttons, in 2 rows, the upper row is blue (like the game), the lower row is red. The trackball is red too, but that was the only color available that would fit (the other color that I could buy was white, and not glowy). Notice that I've put some instructions there, telling what each button do, and also in each column of buttons I've put a symbol of one of the powers available in the game, so if you press for example any of the buttons near the green pentagon, you will see energy being spent in the game in the green pentagon bar. All this is for usability, the MOST IMPORTANT thing when designing this, is usability, don't get fooled, prettyness factor is important, but secondary. After that, I took all the parts, positioned them in the same position, and pretended to be playing the game (sorry, I don't recorded that... I bet you people wanted to see me looking retarded :P), and then I noticed a little problem: I designed the panel to have 150 millimeters in depth, but I realized that frequently I would hit my fingers in the monitor while using the trackball, and considering the violence and size of some people, they would hit their fingers pretty bad (or hurt my really expensive monitor). So, I decided to use 270mm instead (actually I wanted 250mm, but the board I had was 270mm, no point in cutting 20mm out of a board). And this is a good number, still smaller than the height of a A4 paper (more than this size, it gets more expensive to print the artwork, as the press need a bigger printer, and they charge for the total amount of paper used, not only the strip that you asked). After that I grabbed a board, cut the needed holes on it, and voilá! A board with holes! That fit the parts 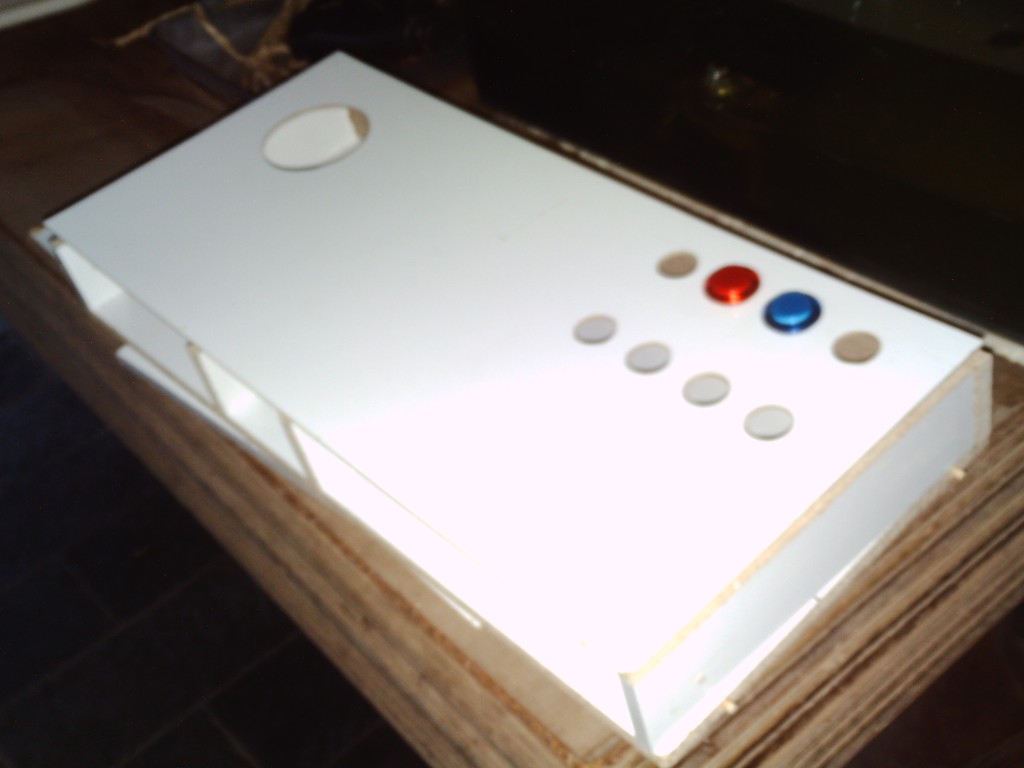 Since the top board is actually a very strong cardboard, and not wood, it is still flimsy, and thus a internal structure is needed. 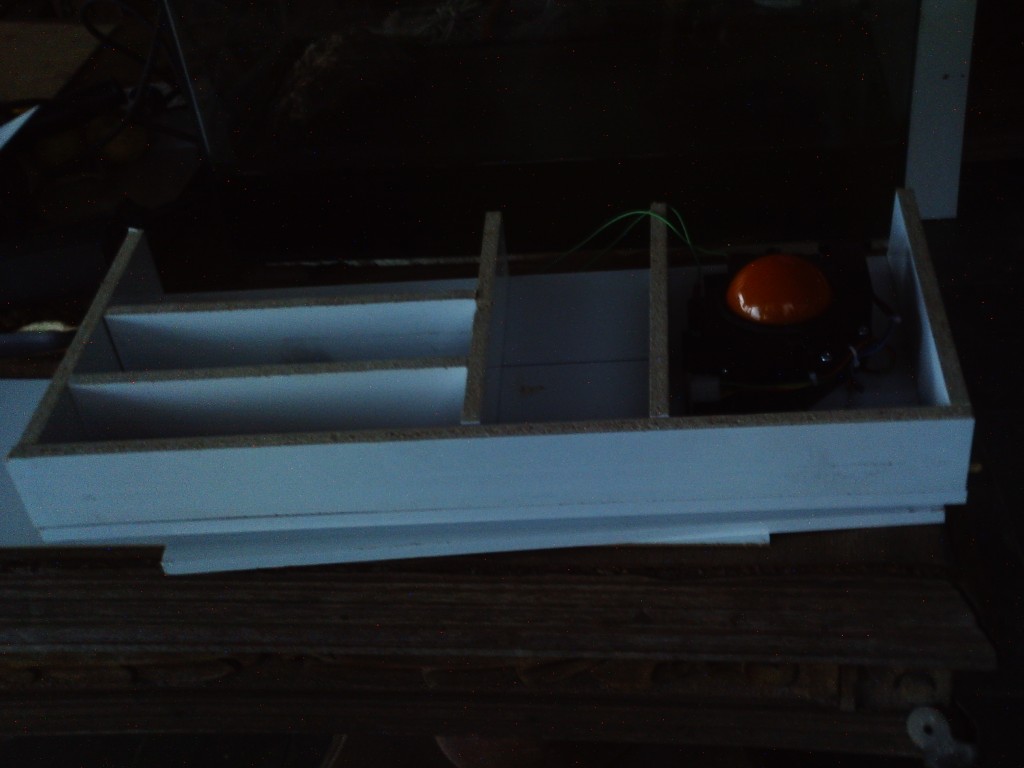 And finally, the thing more or less assembled (I need to buy glue...) on my bedroom 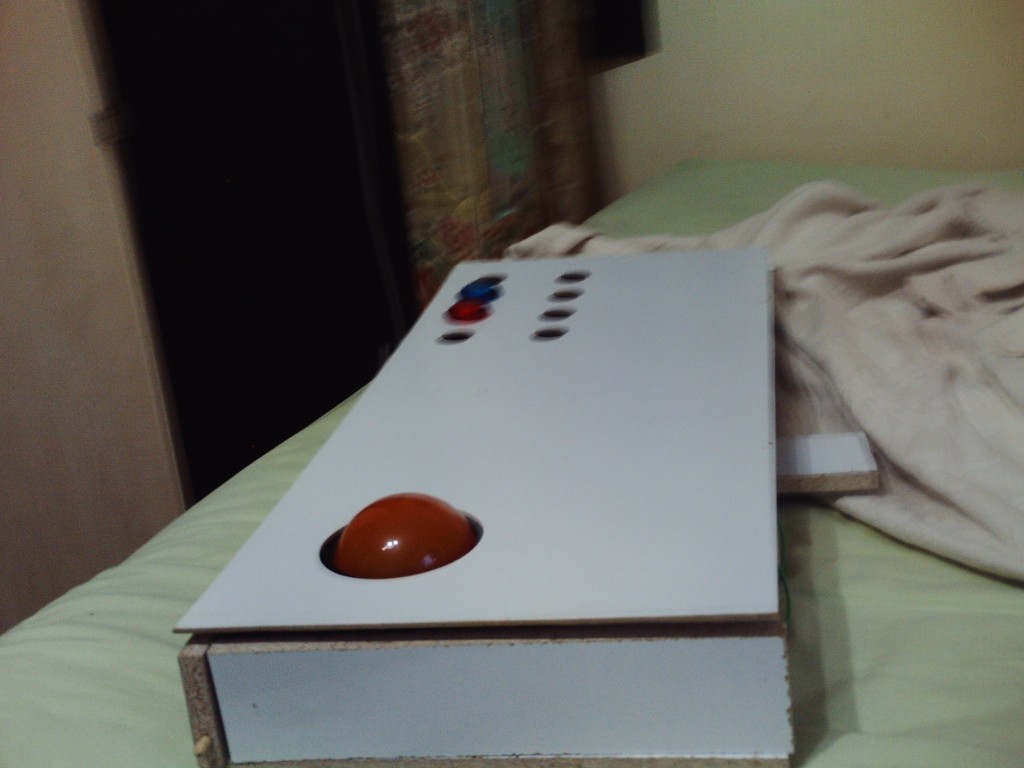 Don't ask me where to buy wood, I don't bought any wood yet, I found all that wood in the trash... (I actually wonder why someone threw in the trash perfectly good wooden planks).

In some other post, I will talk about the parts specifically. And also I will resume talking about the game development itself (today for example a new cursor was added to the game, and a very common complaint was addressed, now the cursor is hidden unless it is really needed on-screen).