This month we passed another Exterminatus mile stone, having polished up the Orange Box version to the point it has become stable enough to roll out to our beta testers. The new beta has also been sent out to some professional developers we've been in contact with at THQ and Valve.

We have just completed a trade between Exterminatus and Renegade 40,000 to exchange Warhammer 40,000 models, helping both mods working toward their future goals. ChromeAngel has been training up a new model contributor called Farseer in the art of UV mapping. Farseer hit the ground at Exterminatus running by contributing three new props this month alone. 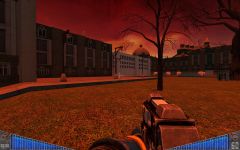 A fairly new recruit to the community DiViNiTY has made some sound cues for us to add more drama to the process of capturing objectives in-game, in addition to his earlier contribution of sound tracks. You can listen to some of DiViNiTY's work over at the Exterminatus moddb page.

Strange thing, the that above music is more 40k to me than opera and war drum.

If only we could get the use of Muse's "Time is running out" or "Hysteria" there totally 40k to me.

The music here doesn't sound even remotely like it goes with 40k at all. It sounds like it should go to Mass Effect 2 or something (and that is by no means a complement).

Everyone Interpretation of what makes "40k" is different, were viewing the audio side of things as a more "im here to kick ***" than "here's a choir chanting, on were all doomed how sad".

40k is very much about fighting and kicking ***, be they alien or otherwise.

If you dont like it then there's an option to turn all music off in the menu in game.

That track above (victory) always reminds me of our map Spacehulk, moments of frantic close fighting followed by a period of calm until it all kicks off again.

Typheron, everyone appreciates the work on this mod. However, it is for the community you guys are working on so hard for, not only yourselves (though I'm sure that is part of it as well). If you want to see your mod a success, though, you might want to listen to what people have to say.

Little things like menu music that break the feel of the game are enough to ruin them, or make them feel cheap.

Telling your community 'too bad we like and and we don't care how you feel' isn't necessarily a good way of doing things.

Just an opinion, nothing more. I look forward to your guys' work.

And im just saying my reasons for liking it and that my musical view of 40k is not the "traditional" one.

Ill never agree on the ochestrial thing, this is a fact, but chrome is the main at whom the buck stops.

Dude, okay, orchestral music is not "OH HOW SAD." perhaps powerful orchestra and not VIVALDI?! Maybe you should listen to Russian composers. Search Youtube for "Dance of the Knights."

Second, if you were going for a "we're here to kick ***" approach, try ... i don't know... something that wouldn't be playing in a gay bar? Can you envision space marines destroying hordes of aliens to that little ditty? I can't. Try Motorhead, they're the perfect band for playing Orks in my opinion. "Know your body's made to move, you feel it in your guts / Rock'n'roll ain't worth the name if it don't make you strut..."

Look, I really hate to break it to you, but I can't see anyone besides you saying it was a move made in good taste to put this as the menu music for a Warhammer 40,000 game.

It is a move made in good taste to put this as the menu music for a Warhammer 40,000 game. Good job.

Yes this Sound is definetly not Warhammer 40k-like, the 40k universe needs some dark and orchestral. ok you cant get an orchestra, but this is not the right thing

DiViNiTY has made a variety of tracks for us in varying themes, you can listen to 3 of them on our video channel ( Moddb.com ). Yet more tracks can be found on the Exterminatus forum, the one here is probably not a good representation of the full set being at the far techo end of the range.

I would have preferred an orchestral or latin chant type thing going, but not having any audio talent on the team we have to take what we can get.

I think the track in this youtube video is the most 40k thing i've heard ( Youtube.com ), not a rick role I promise.

I would have liked to have included more beta testing action, but this build doesn't seem to place nicely with scrds.

personally, I dont really care how the soundtrack will sound (this is good though), as long as I can shoot stuff with a Boltgun I will be quite content. :)