Post news RSS Another look at Gull City, with a bundle of screen-shots!

Our new map is coming out very nicely, but in reality this is the 4th time we've made it. Why even bother? We can even explain how we got it wrong the first 3 times, and why we did bother.

Maps are by far one of the most important parts of development. Maps are the visual life-blood of any project. So when we had to recreate a city from a handful of drawings, we had to be sure we were going to do it right.

Lets back up. Back in the day we had a neat habit of throwing out whatever media we could find, terrible or not. Gull City, our primary city map that a large part of the project revolves around, started off as an unplanned bundle of blocks.
To fully encompass this, this is an old screen-shot from Crimson Crow's early development: 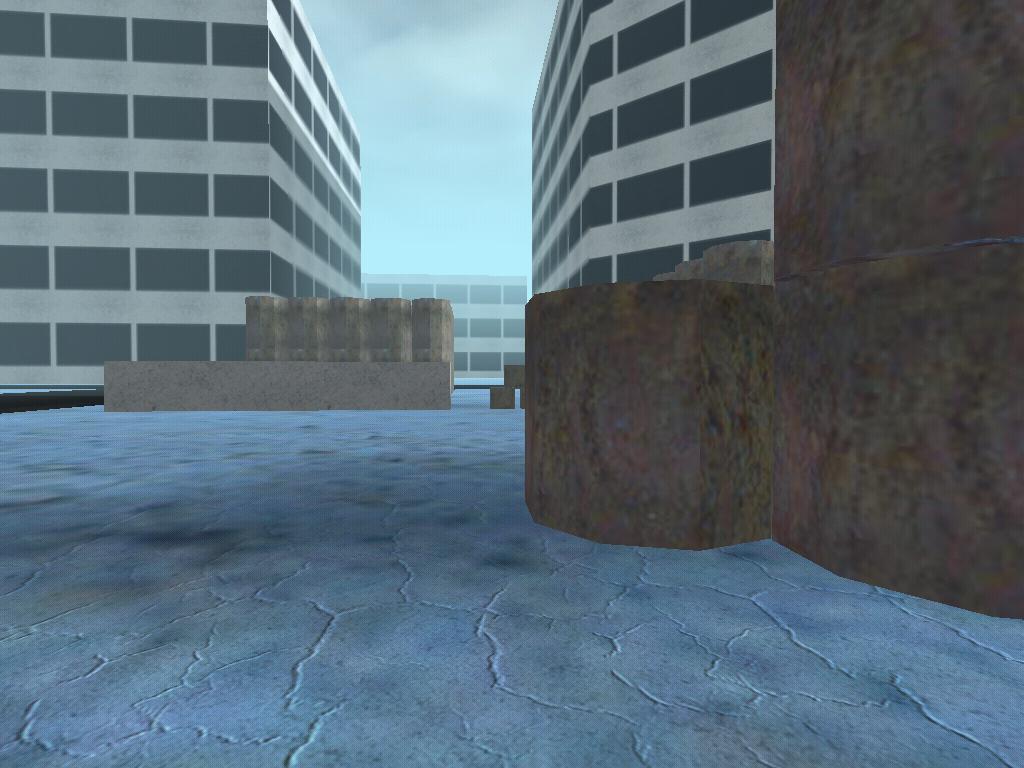 No color sense, map sense, or any sense really. This was back in the day in Torque Game Engine, before Torque Game Engine Advanced even set foot on the scene.
At the time, we were happy with the design and decided to leave it be. It wasn't until months later we made a jump to TGEA, and 'heavily' changed the design.

First, we decided to get some of our textures, and ones that matched at that, and immediately hopped into the BSP constructor to create whatever we could even think of. Quickly we saw results. 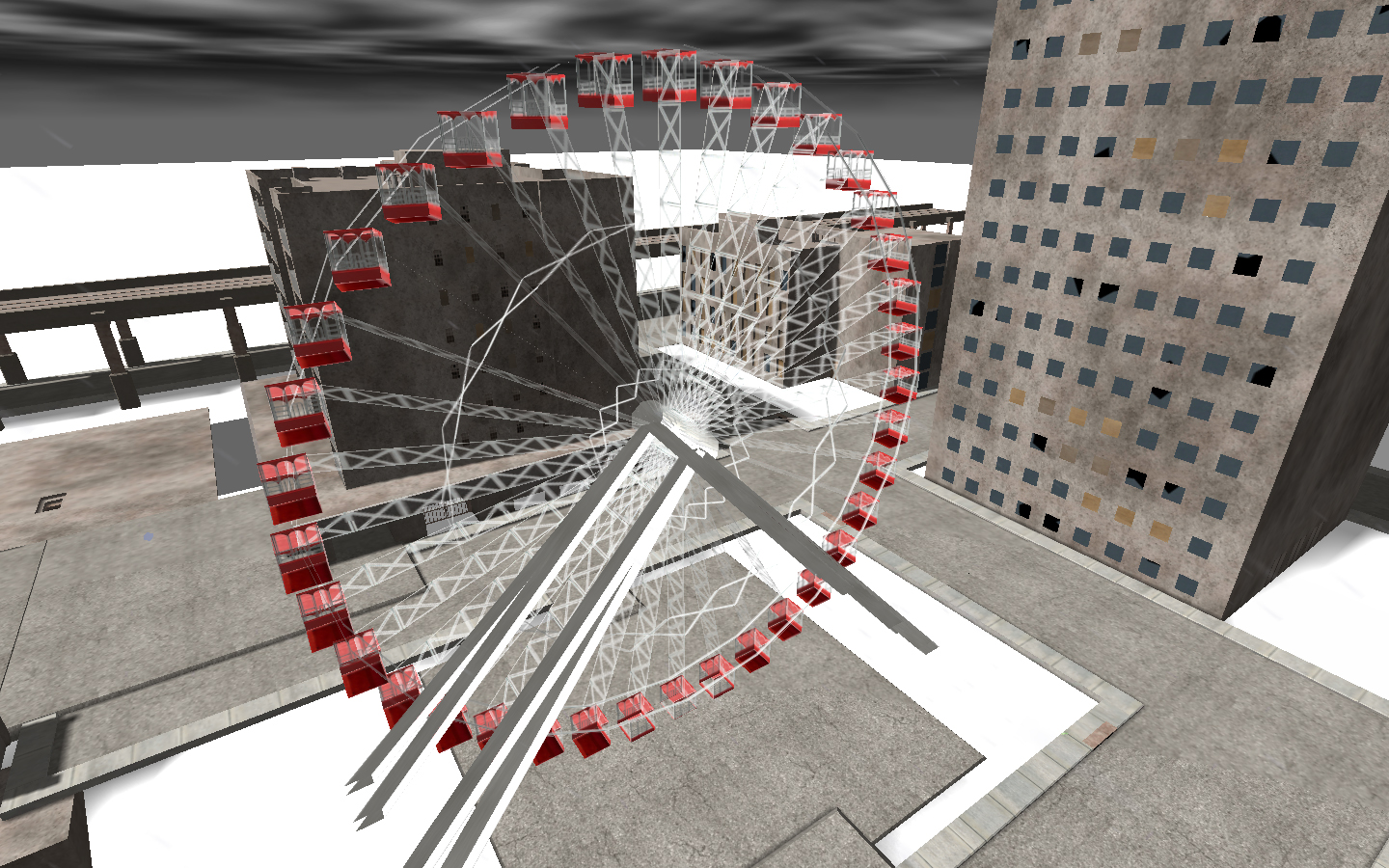 Though the above screen was a test in 'TGE', it was very much a 'TGEA' map.
We went from simple blocks to more-complex-than-needed buildings. Pieces of buildings were intensely detailed while other parts, like 90% of whats seen, was left undetailed.

This was a very poor optimization choice and the project suffered for it. We now had 7 minute relight times (Something that usually takes a few seconds) and terrible frames per second for something that really shouldn't have been buggy at all!

Our color choice was very poor. It was literally gray with dirt smudges. After hearing complaint and complaint, we decided to take some drastic action. 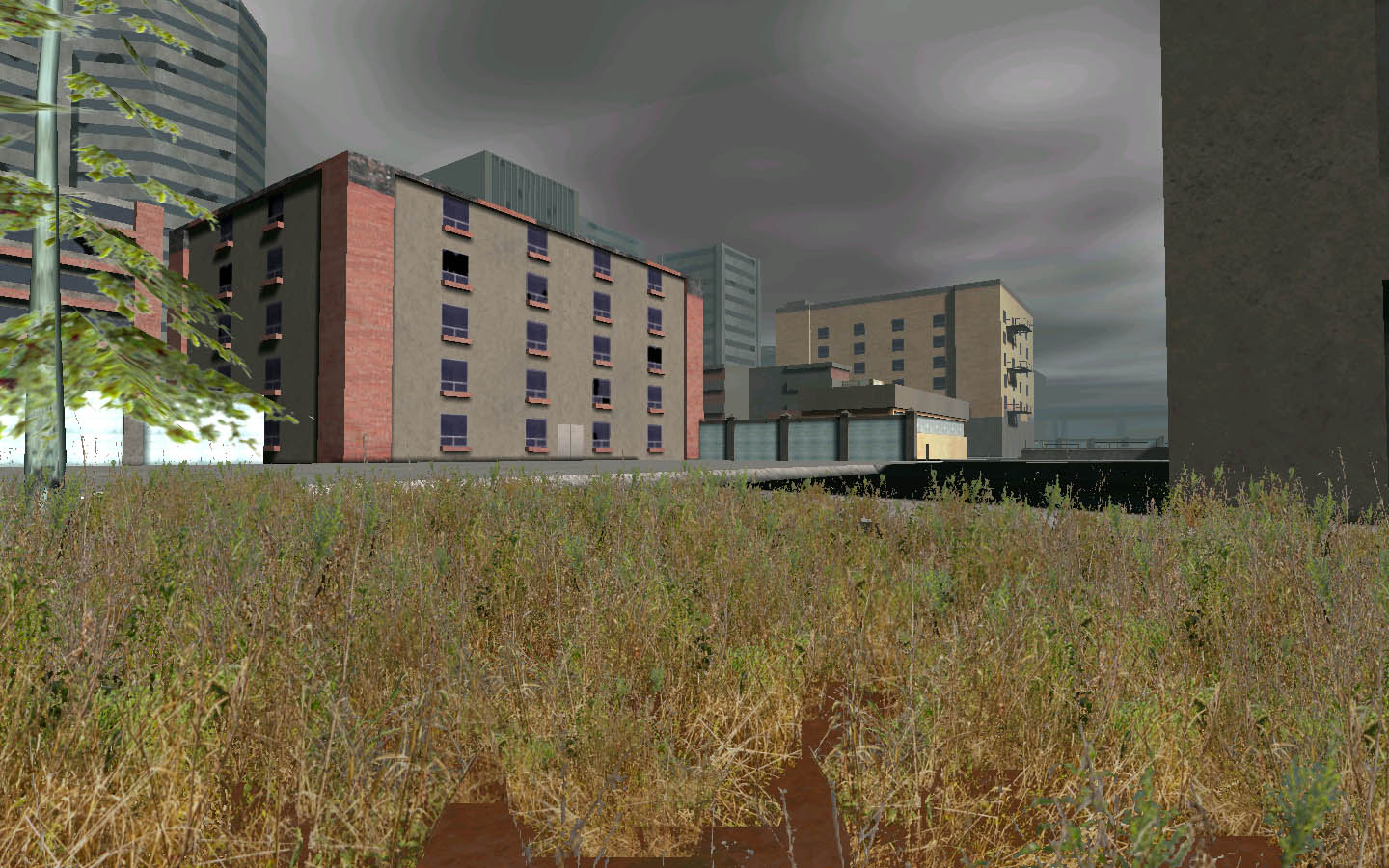 At last Gull City took some color! We added foliage, trees, and even some detail props which made a huge impact on the look. Amazingly, this was around a year ago when we first unveiling the 'new look'.

Building details were intensely stripped down and put to better use. Finally some textures with color were added. They weren't 'too' thought out, but they certainly made the image 'much' better appearing than what it was before.

The colors eventually just felt 'off', so we tore the city apart again.
This time we knew what we wanted out. The sky scrapers had to go. They looked nice but did nothing for game-play. In they hurt it! The sense of scale made your character appear smaller, and the map way bigger. Instead of running into a fight, it felt more like you were trudging into a distant area.

We decided to make maps smaller, 'much' smaller, to fix that. 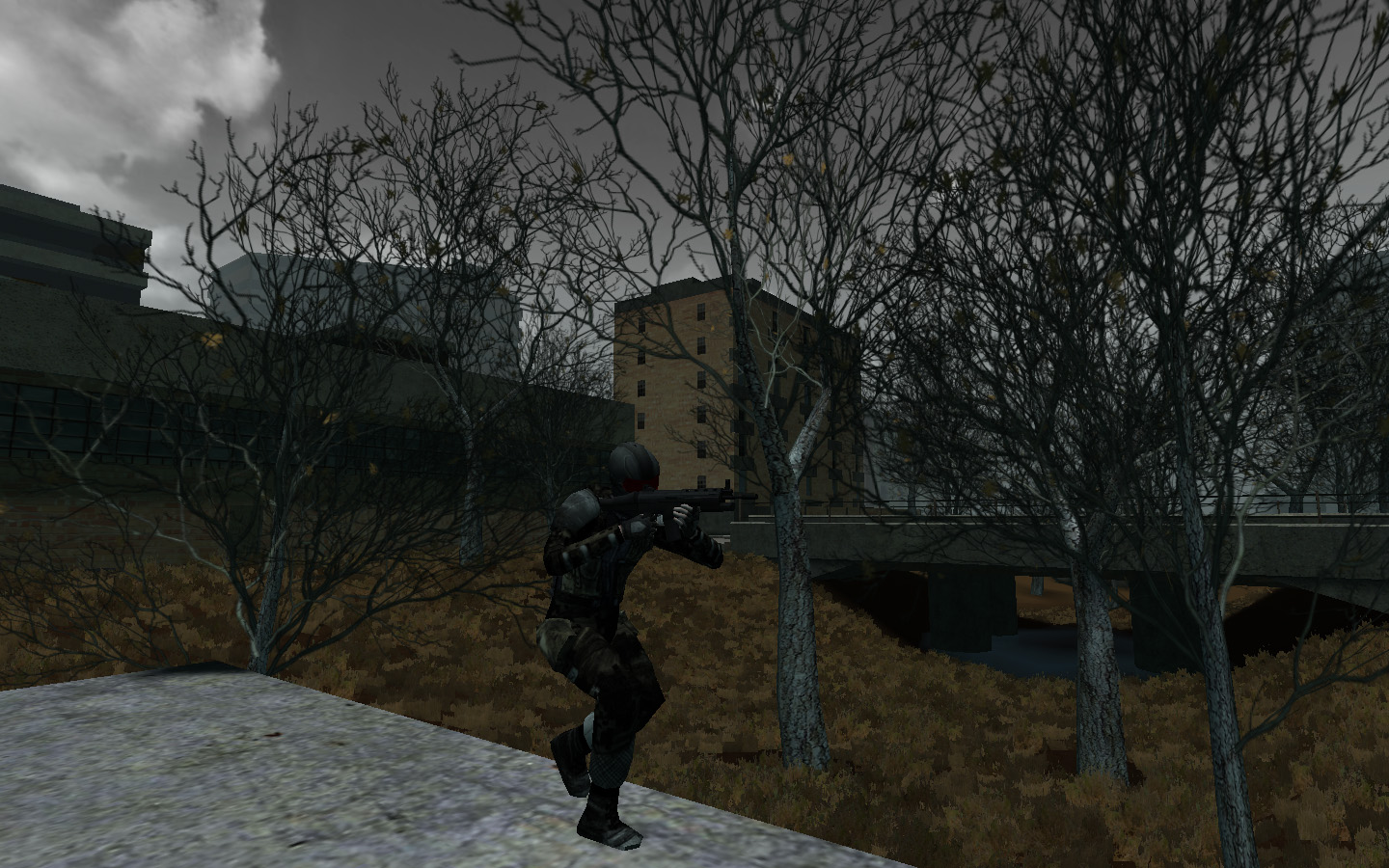 At last the color fit much better. Nothing was too bright and few things were too desaturated.
The foliage immensely helped, once again, and the scale was much better off when it was smaller.

Right when we started nailing the color and look, switching to TGEA loomed in the distance.
On the team, this was a very rough transition. Certain members argued, somethings went wrong, and somewhere down the line a terrible bug crippled the engine.

We all passively agreed to make the switch, only we all knew we would be using the new graphical abilities quite a bit. After a lengthy discussion, the mapper Warlord_Evil decided to really think-out the new Gull City. 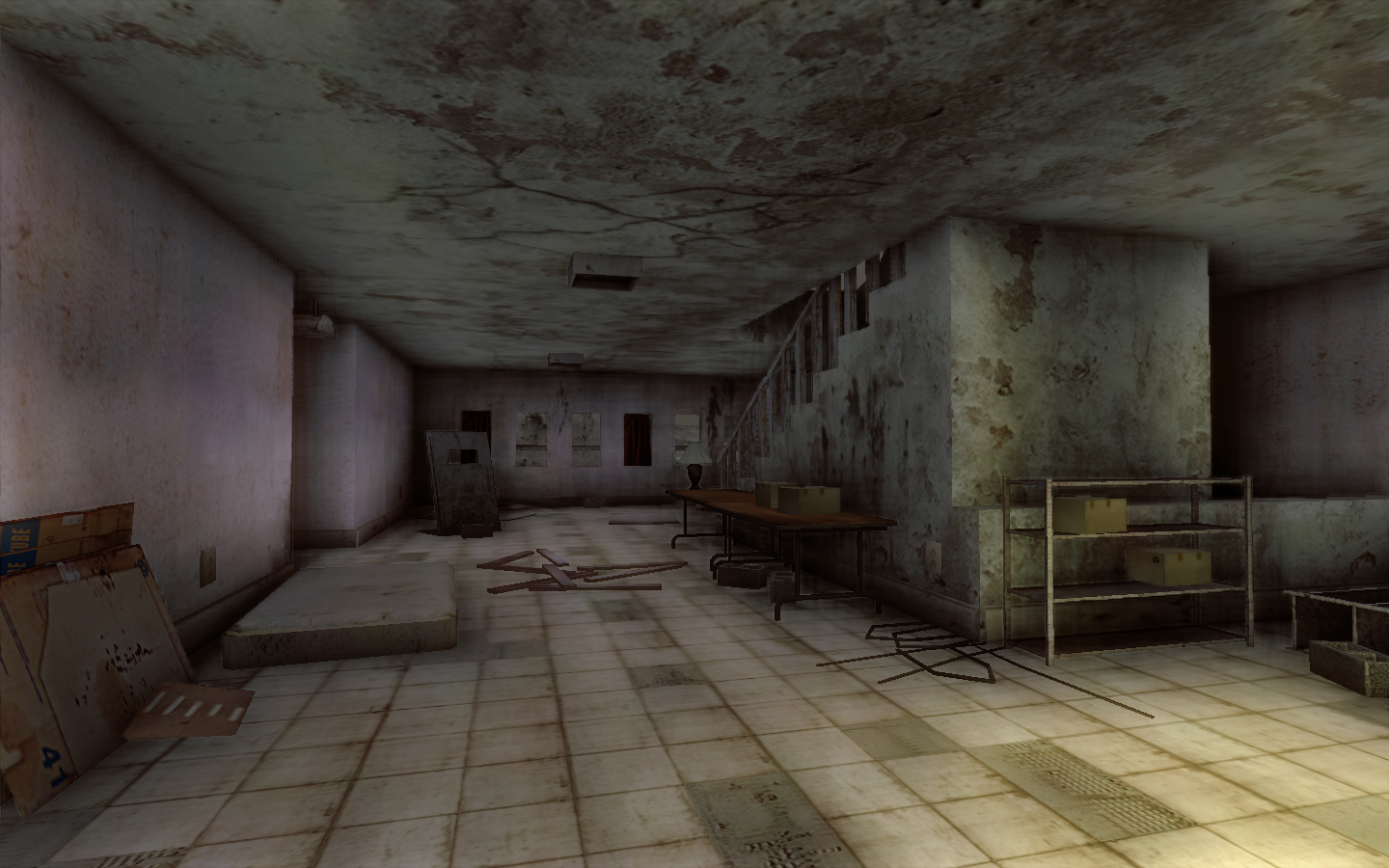 Looking back on it, it was a little bit funny. We deleted all the screen-shots we had and kept everyone waiting for weeks, until finally we uploaded a picture of the entrance of the map.

Everyone was a little shocked. Honestly I was in a way too. Textures, colors, and overall look took a dramatic change as seen in the above picture. Bundles of new props were made with the 'right look'.

The biggest change with the addition of SSAO (Screen Space Ambient Occlusion).
Soon, the older pics and the newer ones had very little in common.

Which now leads to presenting the new look. You've read through the history of the map, you deserve a few of the new screen-shots: 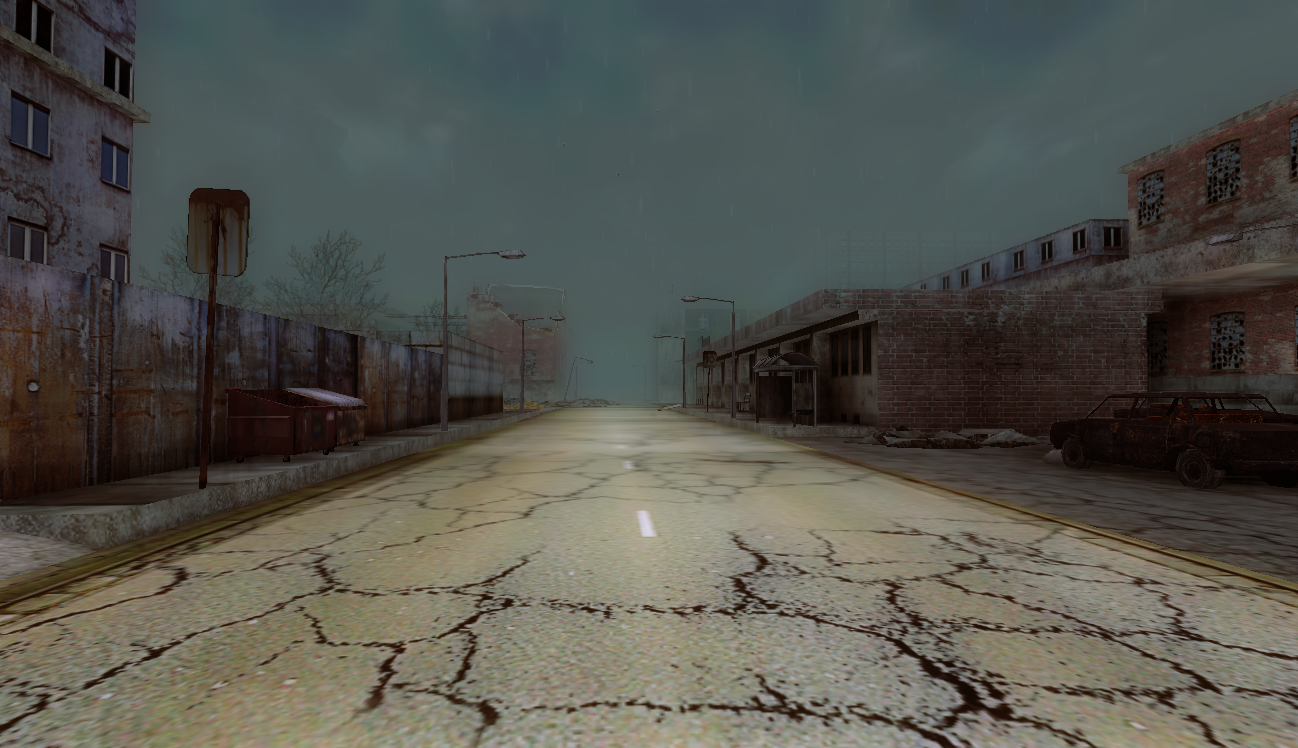 This is the center street of Gull City. It looks and feels desolate. All we need is a tumbleweed to roll by to complete the scene.
To relate to previous mapping experiences, buildings are much shorter than what they were before.
Instead of 20 floor super buildings, most average around 2-3.

Building details are mostly on the first floor, and as the building goes up, the details and deleted faces goes up. While its not even heavy optimized yet, and frankly the design isn't really complete (expect more cars!), this is still a great example in mapping progress. 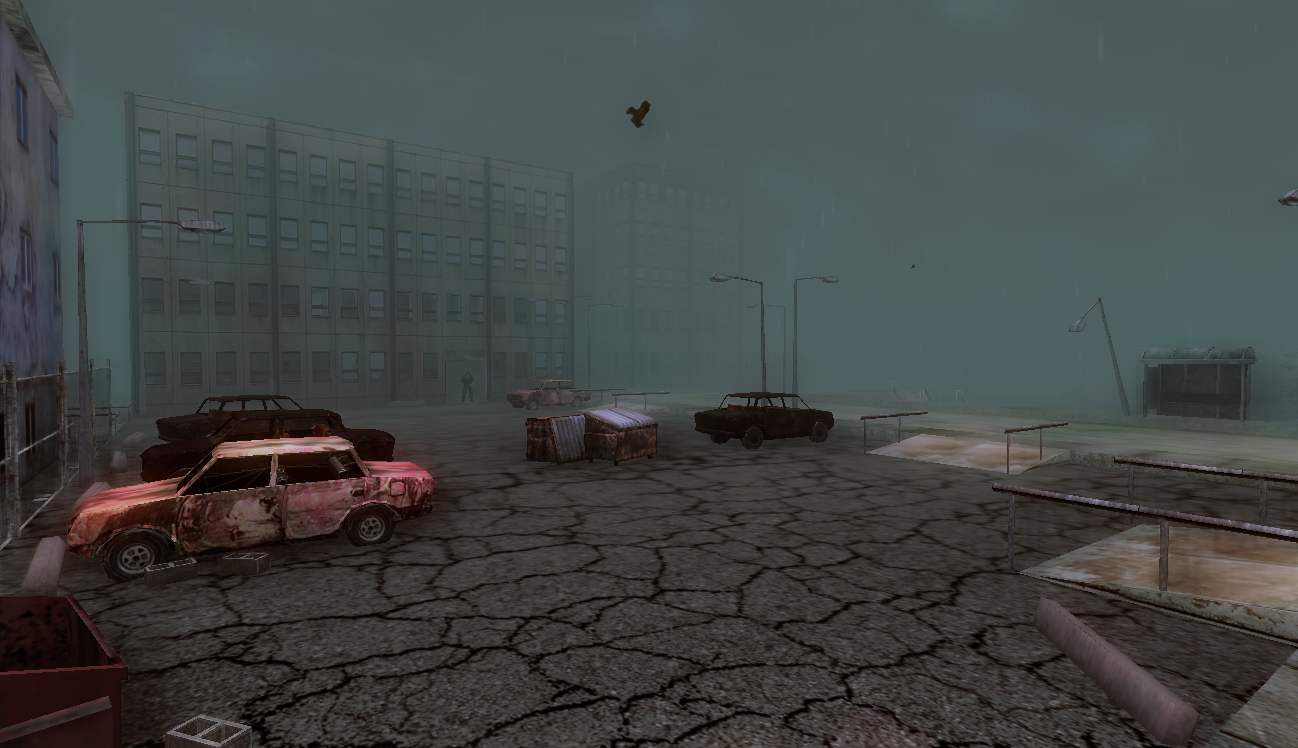 AI added a new sense of depth. Which went hand in hand with foliage.
Another large part of recent updates were normal maps.

We added normal maps to nearly every single building you can see. Unfortunately the results weren't what we wanted. Buildings either looked too glossy or not at all affected.

Its funny, because a major reason we switched to TGEA was to use normal maps on buildings, and now we're seeing moving for that reason was a poor choice. Not that we don't love the engine, but we should have looked into it much more before a jump like that! 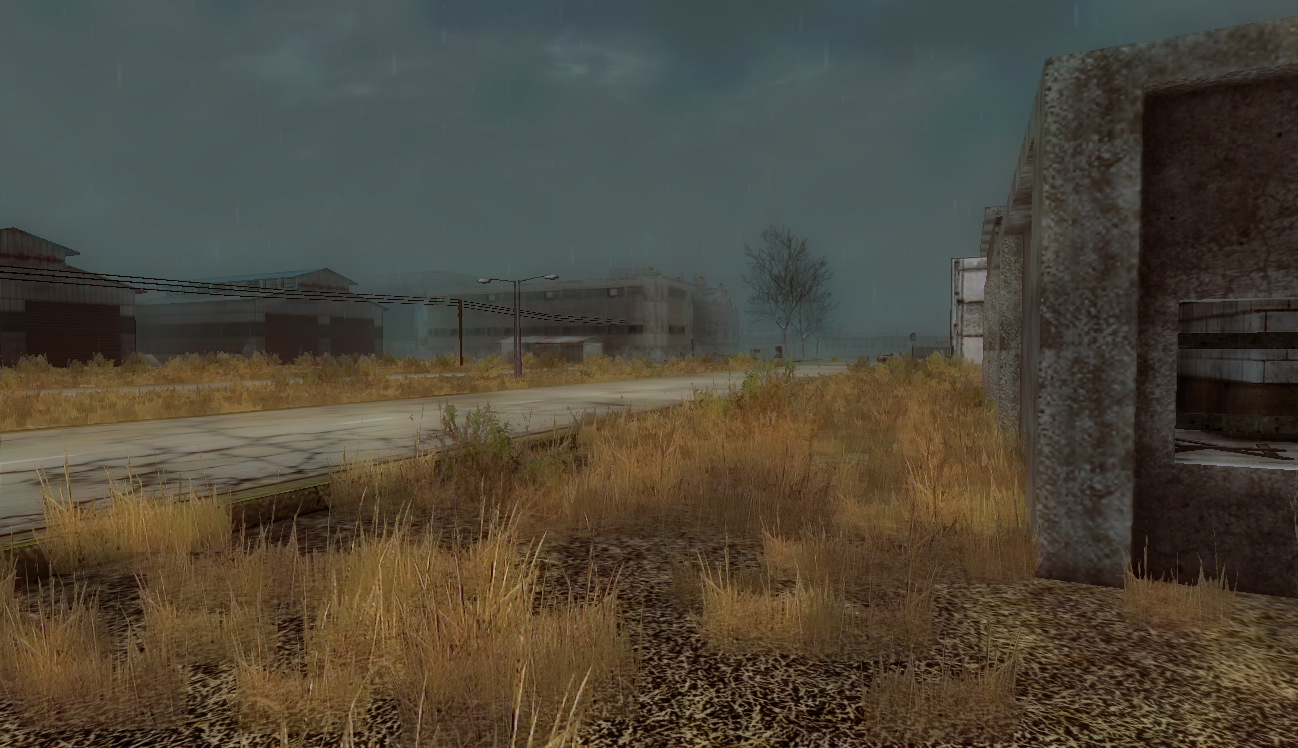 Gull City really came a long way. Honestly it might even have a long way to go.
When we first started this map, in no way, shape, or form did we imagine it would look like this!

Certainly its not the best looking map ever made, but it plays well and feels just right.
If you have anyone to thank for most of the work on the city, you can comment on Warlord_Evil's profile and yell thank you. He enjoys company.

Thanks for reading through the history of this map. Luckily we do have other maps as well.
Maybe next time you'll hear more about the Red Bridge bridge map. 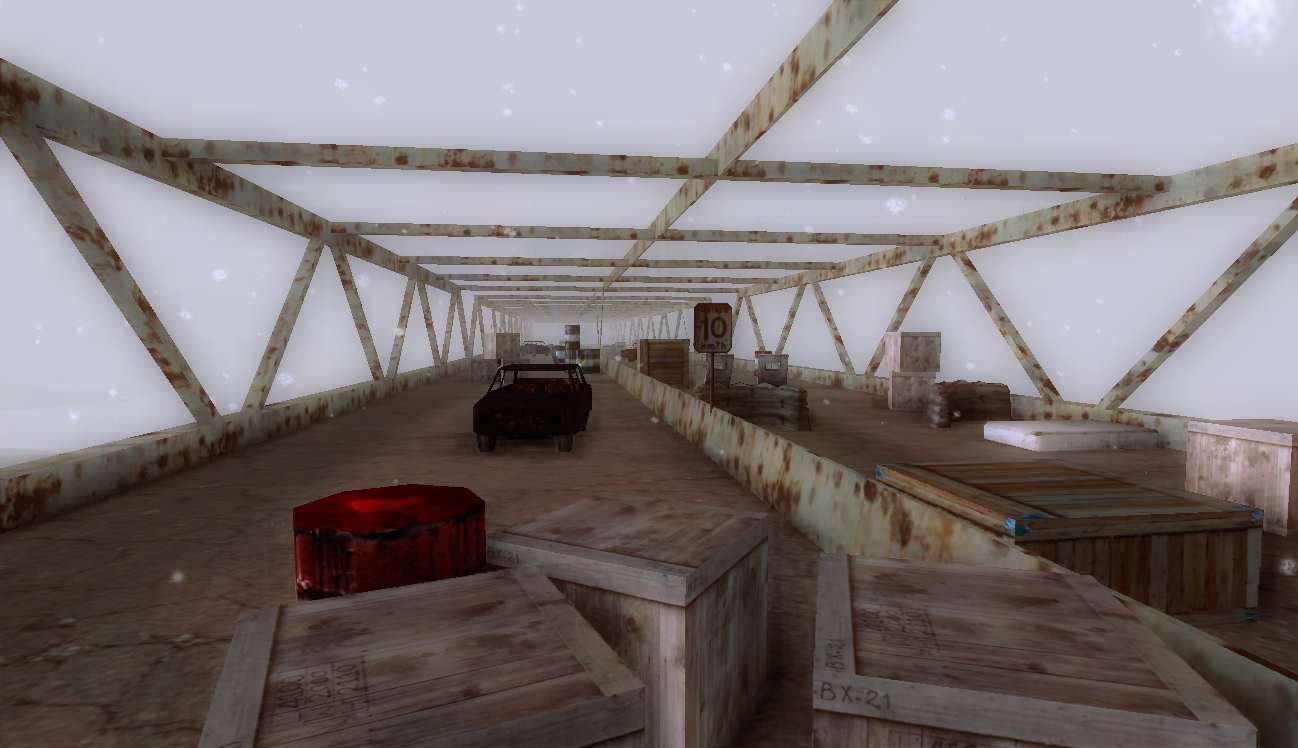 If your interested in future updates, track our project!

Best looking game for Torque Advanced. I seriously think Garage Games should pay you for creating this game! Even if you don't sell it it could be a strong point to document the capabilities of their engine.

Instead of tumbleweed, falling brown leaves and stray dogs and ragged crows would give me a better idea of desolation. Put in a few bones and a dog A.I. fighting over them and you have a simulation of life.

The chances of us selling it is pretty slim, even now.

Ah! Your right! We've also had recommendation for a few corpses.
I'm thinking I may tweak the map a bit.

Try taking a look at STALKER for some ideas of desolation. That game is so bloody bleak it's depressing for me each time I played it.

I've... never actually played it, much to the disappointment to everyone on the team.

Thats a great article. And it really does show off what torque can do. I remember usuing torque at uni, and in all honesty what we had was crap because we didn't really look into it at all.

I can't wait to play.

We haven't even pushed it to its full potential.
We have yet to really optimize the LOD, textures, and we haven't even started to use Parallax and Relief shaders!

I 'really' need to write some tutorials on Torque.

So the game went from sunny, odd colored and happy to. Well, any modern game, bleak, gray, dead and abandoned. Don't get me wrong, I like that. S'just funny.

While it is kind of bleak, it has way more color than what it originally had, and realistically less than what it had as well!

I'd say it has a (decent) balanced middle. Just in my opinion.

That was entirely unintentional though.
Its actually the Ferris wheel from Navy Pier in Chicago.
Upload.wikimedia.org

hey Ninjadave, after playing Fo3, I suggest you use rubble to cut off buildings realistically, instead of having non responsive doors. Or you can have boarded up doors.
Nice work by the way, much more than I could do

Actually a lot of buildings are accessible.
We haven't planked down certain pathways yet because I haven't made the plank props! Which is literally a 2-minute prop.

I already tossed some infested into a building or two, and close quarters are what they're good at!
So maybe breaking into houses isn't always the best idea...

Out of all things I have to say that this game really has some history behind it. Good job Dave, and good job to an awesome crew!