Announcement and first screenshot of new escape-the-room mod from the creator of Nestlings. Also, are you a voice actor?

Back in December, I made a short Half-Life 2 mod called Nestlings in three days. Lots of lovely people seemed to like it. Since then, I've been working on some ideas to bring Nestlings' atmosphere to something more resembling a traditional game - albeit still one that hopefully twists some genre norms around a little. The result of a few months of brainstorming and prototyping is to be Sheltered - and below is a handy FAQ.

What is it?
An escape-the-room mod with a twist. It's a game that wants you to ask questions: What is this place? How do you get out? How did you get in? And what's happening on the outside?

Who's making it?
Lewis Denby. He made Nestlings. He's a games journalist. You might have spotted him on the pages of PC Gamer, Gamasutra or Rock, Paper, Shotgun.

How much of it is done?
The final build is underway after several months of designing and prototyping.

When's it coming out?
Probably a few days after it's finished, tested and locked down. That's all you're getting.

Will it be a really short mod, like Nestlings?
It won't be enormous, by any means. But it will be longer than Nestlings.

Can I help with it?
The vast majority is being created by Lewis alone. But! If you're a voice actor, there's a very real chance you might be able to help out. Drop Lewis a mail at lewis[dot]denby[at]gmail[dot]com. 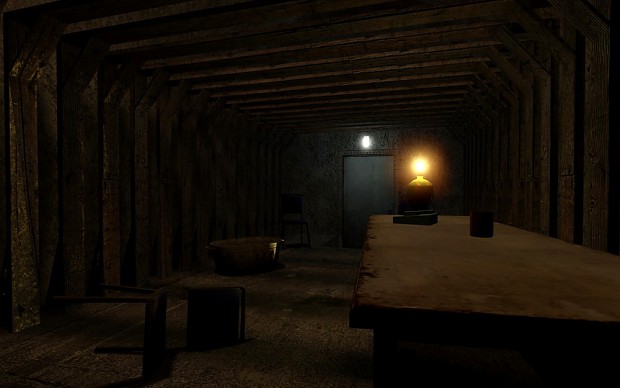 Are you talking of yourself in 3rd person?
Anyway, i'm looking forward to see some more of this mod.

"Are you talking of yourself in 3rd person?"

Cool, looks pretty good I might have to go play Nestlings now, don't think I have before. Tracking.

i must point out that i think nestlings was of much better quality than post script.

Absolute agreement from me. Post Script was overambitious, without a doubt, and suffered for it. Nestlings was slight, but much tighter.

I love these small experimental projects