Naval Games: What is it all about? What are our plans?

My name is Helge, many of you probably already know me because of my previous work on various projects. I am one of the leading developers of the game, as well as the lead game designer and art director, lead artist and just about every other "lead", except programming. I can't program. But that's what teams exist for, haha. All of us are also really really bad at names.

So what is this Naval Games thing?

Naval Games is a Real Time Strategy game, with some RT Tactics elements, plenty of micromanagement, and a couple of resources. As the name implies, Naval Games focuses on naval warfare, but also includes a couple of aircraft, mostly carrier based fighters, bombers and utility aircraft, and some naval warfare helicopters.
Units, with a few exceptions, use fuel and ammunition to operate. If a ship runs dry on fuel, it can no longer move, and if it runs out of ammunition, it can no longer fire. Ships have CIWS weapons, those will continue to operate under all circumstances. You can destroy subsystems of ships, such as weapons, engines, power sources, and for extra fireworks, powder magazines. If you destroy the magazines of a ship, it's going down in a most spectacular manner.

Where did you get the idea from?

Many places. Among them are Red Alert 3, Homeworld 2, Ground Control II, and my life-long love for military equipment, specially ships. Well over a year ago I started helping out on another game, Rogue Republic, where I met a couple of people, among them Noek1993, our programmer, and I had a friend who I knew has plans for a naval RTS as well, so I pitched the idea to them early in 2014, and it's been developing ever since. We've gone through various names, such as Dead in the Water. We couldn't call it that, it sounded like Scuba Zombies.

So what's the plan?

For now, development will go at an easy pace, but there's a lot that'll be revealed in the coming weeks and months. I would love to help revive the RTS genere, which has been rather comatose for the last few years. We're going to complete the first faction, the Tenorran Defense Navy, then move on to the second faction, the Xenocidal Robots from outer space AKA the Type-115 Interstellar Civilization Eradication System; ICES, and then numero tres, the Coalition of Populist Socialist Nations, all of them having unique looks and gameplay styles. They could be compared to GDI, a mix of Zerg and Covenant, and Generals' China, to give you an idea of what the idea behind each of them will be like. 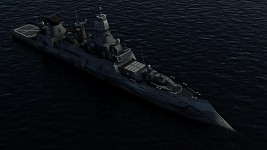 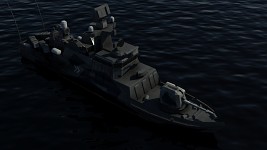 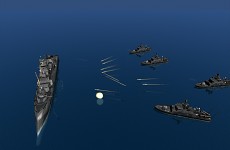 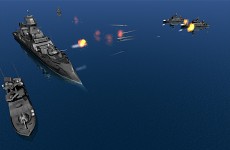 And we have a video too! (but it's very early, so no hitting please!)

I hope you enjoyed this little presentation, and keep a look out in the coming weeks, there's plenty more where that came from!

Looking to forward to see this as well.

Will this feature an armor penetration system or will it just use the classic hit-point system? Also, awesome work.

A mix of both in a way. While there is no armor thickness value or anything of that sort, units have varying resistances to damage types. If a weapon does, say, explosive damage, and the unit has high explosive resistance, the damage goes down.