Bo's Bluff! A prequel to Grimslingers, where cheating is encouraged.

Today I am pleased to announce Bo's Bluff! A prequel to the mobile edition of Grimslingers. 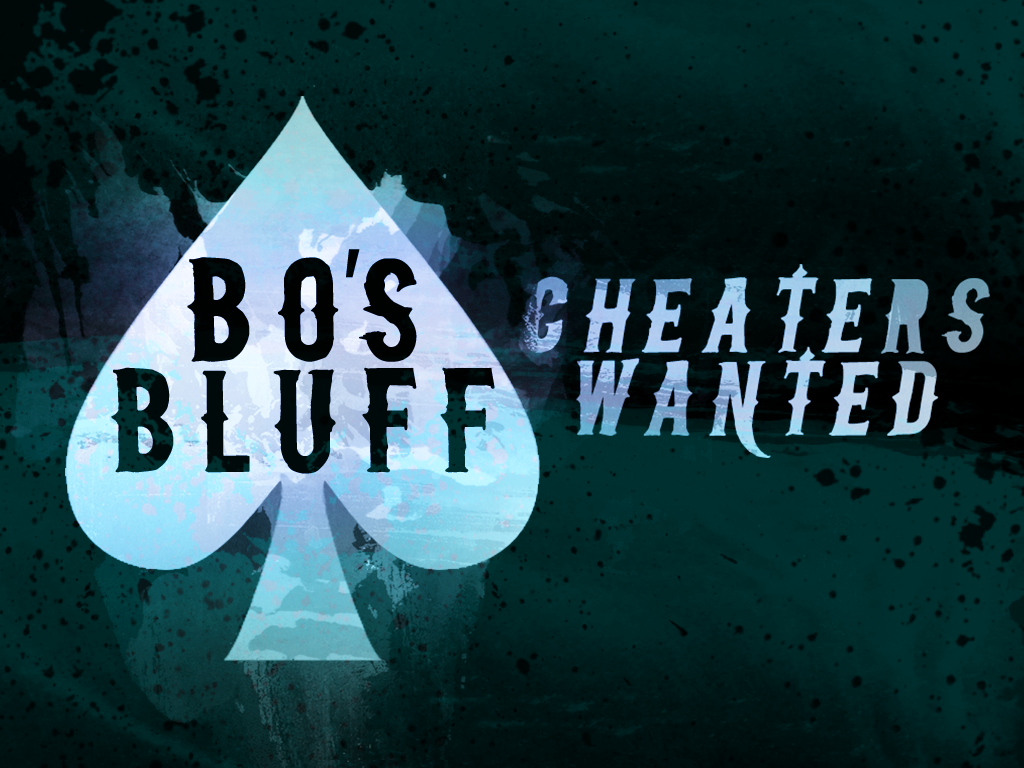 Bo's Bluff is a free-to-play, two-player, online mobile game based off of blackjack. It takes place in a saloon owned by Bo (some of you may be familiar with him as the narrator of Grimslingers).

Bo owns a saloon in the Forgotten West, frequented and supplied by the Iron Witch. Folks from all around the Forgotten West seek refuge from the dangers of the land in Bo's humble saloon. Resources are slim and Bo's made up a card game out of what few cards he can find.

You will experience the game as one of many characters playing Bo's piddly card game. Folks in the Forgotten West are dirty scoundrels, criminals, liars, and cheats. So Bo teaches you how to cheat and spot a cheat to level the playing field.

Therein lies the hook of the game. Cheating.

Base Game: The basic game consists of drawing from a 10 card deck. There are 3 rounds, and within each round you are attempting to reach 11 points, or as close to it without going over. Each round, cards are put back in the deck and shuffled.

Players will choose to "push" (draw a card) or "hold" (refrain from drawing). If both players hold in a row, the round ends and your hand total (total value of all cards in hand combined) is added to your score total (score total is all rounds combined). If you "bust" (go over 11 points) you'll lose all your points for that round.

The purpose of this feature is to allow someone that is behind to make a comeback in each successive round. Thus there shouldn't be any earlier quitters, who think they have no chance of winning. As a side note, your final score directly relates to how much in-game currency you will earn, so quitting early is going to cause you to earn less/no currency.

Cheating: When a card is drawn, players have the option of switching it for a more desirable card up their sleeve (shown has three cards popping out from behind your character). You'll need to be careful though, because if you get caught cheating you'll automatically lose that round and all points accumulated that round.

Tells/Accusing: Each Character will have different "tells". Tells are things like an intermittent twitch of the character card, beads of sweat dripping off, shaking, etc.

Spotting a character's tell is how you'll know they are cheating (there are others ways too, but this will be the main way). Tells don't always indicate that someone has cheated though.

If you think someone is cheating, you can accuse them. You can only accuse someone once per round. Be careful though, because if you accuse them and they didn't cheat, it means you've lost the ability to accuse, and they can cheat all they want after that.

Emote/Chat System: A big part of Bo's Bluff is immersing players in the lore and feel of the Forgotten West. Players will be able to select from 10 emotes/chat options by dragging up and down on their character card (some of the 10 options access a much larger pool of random emotes).

The emote/chat system allows you to roleplay your character, shoot the breeze with your opponents, insult them, and ultimately accuse them of cheating.

(chat text shown is just placeholder, and will not be in the final game).

Online Multiplayer: Bo's Bluff is mine and Jeff's first attempt at cross-platform multiplayer between Android and iOs. The goal is to allow players to play random strangers or directly challenge friends through game center and google play services.

Single Player: Much of the details for offline play are still in the works. At the moment, the goal is to have a repeatable double elimination tournament style experience, with a jackpot of in-game currency at the end.

Free to Play: The game will be free to play, and feature intermittent video ad offers through unity's ad system (much like Crossy Road). Watching ads will earn you in game currency (just playing the game will as well) which can be used to buy new characters, personalities, and ornaments for your character card.

Jeff and I decided to make Bo's Bluff so that we can build and test every (or most) of the systems we will need for Grimslingers, but with a much lighter game. This means we can learn the ins and outs of app development and our business setup without the burden of such a content heavy and complex game like Grimslingers.

I'm sure you've noticed that Bo's Bluff looks nearly identical to Grimslingers. Everything we develop for Bo's Bluff will be used in Grimslingers later on.

Bo's Bluff will take a fraction of the time to develop that Grimslingers would/will. As of right now, it looks like we'll have a playable demo within a month. The majority of development will be taken up by designing / testing monetization and cross-platform play.

We look forward to releasing a demo and getting all your feedback very soon!

Neat that you're releasing a smaller game to help improve the final product and the cheating mechanic looks ace! Can't wait to give this a try :)

Thanks man! I hope cheating turns out to be quite fun.

Bo's Bluff isn't meant to win any awards, but hopefully it's fun enough to generate some revenue for us while we slave away at Grimslingers.