ModDB delayed update news, as well as a note from the ModDB page maintainer.

First of all, most “mods” that add new features to the game are in a very grey area legally, and I frown upon them. Most of them add really cool new features, though. It's highly likely that something like the bridge mod will make it into the game.

Now, the update.
I was going to release this today, but it's 6 pm already and my fiancée turns 30 today (I love you, ez!), so I'll go eat a nice dinner instead.

General fixes:
* players and mobs in lava or fire no longer spam sound effects
* getting hit with a higher damage while recovering from a smaller one now works as intended
* lava flows further in the Nether
* zombie pigs eventually forgives
* added support for custom texture packs
* fixed duplicate buttons when resizing screens
* zombie pigs and ghasts no longer get hurt by fire or lava
* fixed volume sliders now saving properly

Multiplayer fixes:
* hellworld=true no longer overwrites old save chunks. Player positions will still break if you switch it on a running server, though
* boats are now visible to other players
* minecarts move nicer
* fishing kinda sorta works, but needs more work
* sheep and cows look like sheep and cows now
* buckets work now
* fixed stairs being really difficult to destroy
* increased the timeout before “Took too long to log in”
* made it possible to ride carts and boats (pigs should work too..)
* Signs on the sides of cacti no longer crash the game
* The player won't get stuck on the top of the world in multiplayer
* Reverted mob spawning back to the old code, it was far to annoying. I have plans on what to do with this.
* Fixed the leaf particle colours
* Reduced CPU usage for monster spawning, but there's still a lot of work to be done to reduce lag on SMP servers.
* Attempted to fix the portal dupe bug where you could exit through a different (new) one than the one you entered through.

About the portals, it's possible that two portals can lead to the same portal in the Nether. This is because the space down there is compressed by a factor of 8, and I haven't come up with a good way to fix this yet.
I might just end up doing an explicit one-to-one binding between portal pairs, but that's nontrivial as it should survive the portal being temporarily destroyed. If you TNT a portal then rebuild it, you'd expect it to still lead to the same place, right?

There are a couple of bugs left, like it not being possible to steer the boats yet, and other players not having the riding animation when riding. Fishing also works horribly poorly. Once I've fixed that tomorrow, I'll release an update for both the server and the client.

As for the texture packs, it'll look something like this: 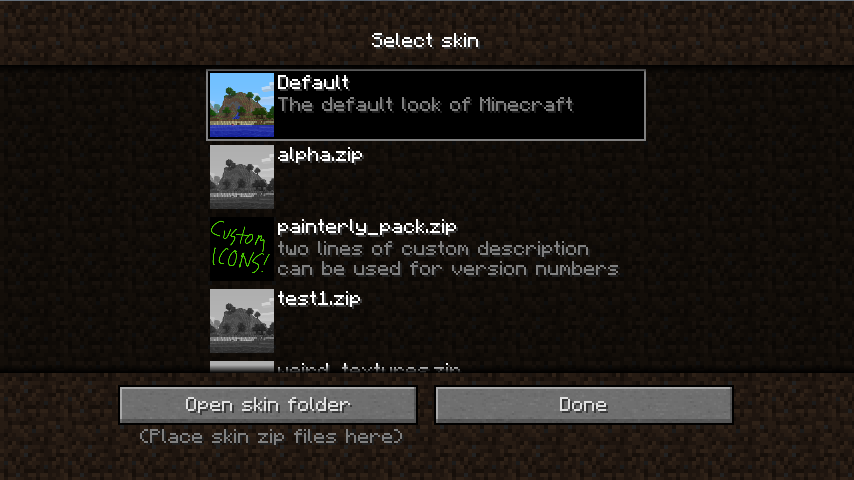 Later on, the server list and world selection in singleplayer will have a similar look to this.

[EDIT]: I was referring to client mods that alter or inject code. Texture mods and server mods are fine.

Due to many complaints about the ModDB page usage, I am announcing that I will now be patrolling the page. I regret this decision, but it cannot be helped. I cannot leave the complaints unanswered.

So, any images uploaded that are not of any form of significance (pictures of tiny houses, pictures of generic caves, pictures of your character etc.) will be deleted. I won't be here all the time to delete them, but I will try to help as much as possible.

I would encourage users to upload these pictures on their userpages. I don't want to completely prohibit them! but, I can't make them affect the users following for mod news.

I will create a forum for you all to discuss and trade pictures and that sort of stuff, but beyond that, I cannot change this decision.

Please note, this only affects images. it does not affect videos, zip files, and files overall.

Thank you in advance for your co-operation.

odd u frown on mods on a site that supports mods, can you please explain>

Notch frowns on client mods. basically, mods that change the code of the game. he does, however, like server mods and texture packs, and will likely implement an official way to modify the game.

Have you tried adding a server check to ensure that client mods match those run by the server?

Also, I'm not really familiar with moddb, but is there way to establish a minecraft communtiy page so that fun houses can be spammed there instead of on the official minecraft page? It'd be a good place to put user creativity and other miscellaneous content.

someone should make a minecraft lovers group!

And even then it's going to be things like the mod that makes boats fly and go super fast. He's not going to exclude mods that add legitimate additions, only the ones that illegitimately alter the source code (through injections or whatnot).

i guess there will be a new cow and sheep skin :/

In SMP chickens sometimes drop leather when you kill them, so presumably they are actually cows on the server-side but displayed as chickens in the client-side and this update will fix it.

but tnt cant destroy tnt... can it?

tnt will blow up other tnt blocks, thats how you see people make the huge explosions on youtube, search "Minecraft Nuke" or "Big Minecraft explosion"

Great news about the new rules on spam, Kizzy.

what did the sheep and cows look like before?

Is the update out yet? because ive tested all those glitches and non of them are fixed.

it says tomorrow, which is today, so later today. :)

Well the update has totaly messed up my server.... Every time I smack a block it respawns so i have to constantly hit it till it breaks ANNNDDDD a lot of people keeping getting errors when trying to join my server even meh!